Is it a simulation or arcade game? It doesn't know either. 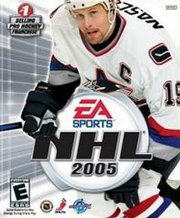 EA's NHL offering doesn't seem to hit the mark this year. In some respects that's okay since the actual NHL isn't hitting any sort of mark in 2004. Those wanting a deep simulation will be dumbfounded, wondering why NHL 2005 seems more like an EA Big title.

A few new aspects of NHL 2005 add a much needed sense of control over your team compared to last year. With a touch of a button, you can switch to any player with or without the puck to set up some smart plays. However, passing is arduous. You can never seem to lead your teammate as much as you need to. The result is a change of possession or a long pause while the puck slides unguided toward a random wall.

Another thing that is sort of perplexing is how much EA deepened play calling and the franchise mode only to be undermined by the core hit-and-score arcade gameplay. The Dynasty mode employs a smarter team building element this year. You can stack your roster full of the best players, but unless you edit and design their chemistry. Add a meticulous financial planning/home arena advantage factors and you have a pretty robust and involving mode for those detailed-type hockey fans.

But then again, all that hard work seems all for not once you hit the ice. All of the featured absolutely beg for hardcore simulation. The result is a confused and less realistic game than last year.

But in the arcade vein, NHL does have a pretty addicting "Free-4-all" mode. One goalie tries to defend up to four players from scoring. You and three of your friends have a frenzied shootout and try to score the most goals on the battered goalie. This is one of the better sports party games available, but ESPN's NHL 2K5 mini games have more variety.

All real player faces are present and look really good. All the animations are smooth and the overall graphical package holds its own. The character models are a marked improvement over 2004, but still look a few years behind its ESPN competitor. The arena noise and overall crowd interactions are some of the best in the business even though the commentary and sound effects offer nothing new.

NHL 2005 is a big game of tug-of-war between simulation and arcade fest. Everything about its presentation screams that hardcore fans should apply, but actually being on the ice will make you numb.