Nice hopeful title. It turns out to be true. 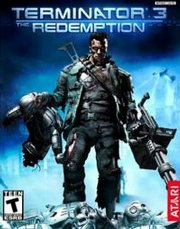 Atari jumped on the Terminator 3 bandwagon last year with the dismal "Rise of the Machines." It got hit hard by the critics and the sales receipts but that didn't prevent Atari from simultaneously announcing another T3 game. Conveniently titled "Redemption," Atari's second try is exactly that. Well, that's not to say that T3: Redemption is revolutionary, but it does weave the T3 atmosphere in with several gameplay elements, providing a pretty fun ride the first time through.

Skynet machines have taken over L.A. and we now know that John Connor will eventually die. His lover Kate Brewster re-programmed the terminator that killed him to now go back and save him. This lovely terminator resembles the great governor of California, and its his likeness you control through this chapter of the ongoing saga.

Not your standard third-person shooter, T3R incorporates hand combat, vehicle jacking and hopping. That's right, hopping. As you are speeding away on some Skynet vehicle you just jacked, you can hop to another speeding vehicle on the fly. This element is executed rather well and significantly increases the intensity of chase scenarios. With cars, trucks, robots and choppers, the variety of vehicles to pilot is satisfying. There are also many stunts in which you can pull off serious air for stylized carnage. Some of these are deemed "Terminator moments" for you to score.

Shooting while driving is pretty cumbersome at first. With the unforgiving difficulty, it may frustrate you beyond going any further. Some instances have you in a rail-shooting mode, where you are already on a set path so you don't have to worry about driving. This resembles the Terminator arcade games of yesteryear with the controllers that are basically model guns. Although these scenes don't have any other purpose than for you to survive the barrage of gunfire, it's pretty challenging to stay alive.

As a matter of fact, the game is almost overly hard. Many of the time-sensitive missions require flawless execution in bashing your way through a sea of different types of terminators. The end level boss battles are worth braving the difficulty, though. Those battles are the most fun aspect of the game.

The controls are fairly tight, especially when blasting your way with the various available weapons. Hand combat is pretty clunky and is hardly useful. Driving is almost as good as the man controls, with tight response and forgiving collision.

The graphics faithfully reflect the Skynet era and do the best job of any Terminator game to date. The whole presentation has high production value and will be a T-fan's dream. Arnold Schwarzenegger's voice is used for most of the T-800's speech. However, he was sworn in as governor half way through development, so they found a replacement. Actually, the guy they found does a respectable job emulating the Kindergarten Cop. The music is directly from the movie's score and adds the right element to the experience.

If there is anything holding Redemption back besides some quirky controls is that there is almost no reason to play through it again. The linear story provides no real incentive to return. Otherwise, Terminator: Redemption couldn't have happened upon a better name.