Sony's latest creation is sure to break into the upper echelon of action/adventure protagonists in video games. He's also one of the most well-developed and purely interesting characters you'll ever see in a video game. Although he's the protagonist, don't make the mistake of thinking Kratos is a "good guy". No, he's a genuinely brutal, violent, and wrathful beast of a character, and the game does not hold back at all in this regard. You'll witness him slaughter women and children, kill innocents for his own benefit, and just be a general bad human being.

Now, a great protagonist alone does not ensure a great gaming experience. Luckily, David Jaffe and his talented team at SCE Santa Monica have truly outdone themselves. God of War features some of the most finely polished gameplay ever seen in a third-person action-adventure game.

There are obvious signs that some features of the game derived from other great games. It features some Prince of Persia style platforming segments (albeit without the stilted combat system). The Legend of Zelda: Ocarina of Time is a clear inspiration for some of the puzzles. The orb system in GOW seems almost directly ported from some Capcom games. In fact, it's nearly identical to Devil May Cry 3. Red orbs are experience and green orbs are health. 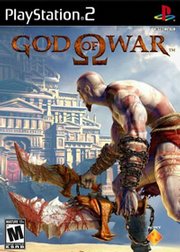 God of War has drawn many comparisons to Devil May Cry 3. This is partially warranted, as there are certainly some similarities. Make no mistake about it, though: these are two very different games. While Devil May Cry 3 is a straight "hardcore action" game, God of War features many other gameplay mechanics. There is far more platforming and puzzle-solving in God of War.

Combat is extremely smooth, and the control scheme is absolutely perfect for the game. One of the best aspects of the game is the system for finishing enemies off as they near death. This will be indicated by a "O" above their head. Once the player sees that, they have to follow an on-screen prompt of button commands to brutally finish off the enemy. Literally no area of the game suffers from a lack of control. While normally a huge chore in third-person games, God of War actually makes the swimming controls very easy and responsive. Platforming is very rarely frustrating, and if you fall to your death, it's generally your own fault for getting hasty.

There isn't a terribly large number of puzzles in the game, but they are all well made and not unnecessarily frustrating. Many of them are in the Ocarina of Time mold, which means a lot of pushing statues around and stepping on switches.

The boss fights are extremely impressive and entertaining. Unfortunately, there is a lack of them. There are only three or four huge boss fights, but they're all great. It seems as if there are many times in the game where it would make sense to have a huge boss fight, but you end up just fighting a large group of high-powered enemies.

The game is heavily steeped in Greek mythology, and this carries over to the great magic system. Zeus grants you the power to throw lightning, Medusa allows you to turn enemies to stone, Poseidon gives you electric power, and Hades lets you summon armies of the undead. This is a crucial aspect of the gameplay and can save you from certain death many times. There are many times a huge group of enemies will have you near death, and nothing can save you except for a well-timed lightning attack. Naturally, there is a magic meter, but this can be replenished with blue orbs found in treasure chests and by defeating certain enemies.

The game does seem to be fairly easy, and this is mainly due to the overabundance of health. There will be many times where you'll encounter a green health chest, and you'll have absolutely no use for it. In boss fights, it seems as if they give you life every single time you hit them, and this takes some of the challenge out of the game. Luckily, you unlock God Mode after beating the game, which is significantly more difficult.

One of the most impressive aspects of the game is the story. While games have become more and more cinematic in the last several years, a select few have had truly great stories on par with Hollywood films. You can add God of War to that list. The story is generally told before and after big gameplay segments, and the level of polish seen in these CG cutscenes is truly unmatched. The battle scenes in particular are some of the most cinematic events I've seen in a video game. While some games have had a good story that is dragged down by terrible voice acting (think Resident Evil), God of War does not suffer from that problem. All of the voices fit the characters very well, and lines are delivered with the right amount of emotion.

The story revolves around Kratos, a born warrior who commands a gigantic army. When met with impending doom on the battlefield, he offers his life to the God of War, Ares. In exchange for this, Ares utterly destroys the opposing army, and makes Kratos even more of a savage beast. Huge knives called the "Blades of Chaos" are chained to his arms, never to be removed. Unfortunately, he becomes so filled with bloodlust and blind rage, he winds up killing his wife and child. As a permanent reminder of this deed, their ashes cover his body until he is a pale white. Visions of this horrible deed haunt him daily, and he offers his services to Athena to get rid of them. He blames Ares for everything, and spends the game trying to ascertain the items necessary to defeat him.

Obviously, God of War is a very mature title, more so than any other console game I've ever played. The game earns its "M" rating with dozens of bare breasts, extremely graphic violence, and even a minigame where you have sex with two women simultaneously. The violence in particular rivals Mortal Kombat fatalities in sheer gore. You'll witness numerous beheadings, bodies ripped in half, and enemies being beat to death with their own sliced-off arms. Just in case that isn't brutal enough for you ... Kratos can stomp on the heads of puppies. Seriously.

The world of Athens truly comes alive in God of War, and the graphics play a very large role in this. Plain and simple, these are the best graphics ever seen on a Playstation 2. The draw distance is seemingly endless, as you can see sections of levels that look like they're miles away. Particle effects are extremely impressive, and the fire, sparks, and lightning look beautiful. The character animations are unbelievably smooth and lifelike, helped in no small part by some extensive motion-capture work. The boss battle with the Hydra rivals anything you've seen in an Xbox game. Another shining achievement in God of War is the soundtrack. The in-game music is extremely epic and fitting, and really helps you get into the game.

The game isn't entirely without flaw, though. There are sections where it simply throws too many enemies at you, to the point of combat becoming a menial task. Luckily, Kratos learns many new moves and abilities throughout the course of the game, helping the variety in combat. Overall, my main complaint with the game is the length. It only took me eight hours to finish the quest, and I was by no means rushing through it. Regardless, there are many rewards to unlock, and more than enough reason to go through the game again.

While it may be only eight hours long, it's enthralling the entire time. There really isn't any section of the game that I would have removed or shortened. It's truly one of the most polished and entertaining gameplay experiences I've ever had, and ranks among the PS2's best.

God of War is one of those rare titles that demands immediate awe due to its majestic scope, fantastic storytelling, compelling action, beautiful landscapes, inspired puzzles, furious but not too deep combat and some of the best boss battles seen on any console. Even though it borrows heavily from Prince of Persia and Zelda, it does many things better than Persia and matches much of the imagination from the best of Zelda's puzzles and grandiose boss fights. Some may scoff that the combat and magic system doesn't go as deep as a handful of other action titles, but what it "lacks" in depth, it makes up for ten fold in execution. Do not hesitate to play this worthy title. - Matt Cox

I need some help. I am playing God Of War, and I am not sure how to get past a certain part. I am having trouble with the parts about pandora's box, I got hades shield, and I put that in one door-way, and this part is so confusing that I can't figure out how to get through the door with the skull on it, with a whole in it's head. Then I moved that crate of wood onto the circle lever thing, that makes the one door open, in the room where I put hades shield, and I cant figure out that whole part. If you could help me it would be greatly appreciated. and if not tell me how to do it, at least to give me a couple of hints on it.

P.S. You can email me at reddie_red_head@yahoo.com if you would be able to help me.