Tom Clancy's Splinter Cell series has been a benchmark for technical achievement since the original game was released in 2002. I can't imagine anyone playing that game when it was released and not being completely amazed by its pure graphical quality (especially the apartment fire at the beginning). On top of that, it featured extremely realistic stealth gameplay and audio.

Two installments later, the game continues to amaze on the technical end but falls short in much the same way as the original and 2004's Pandora Tomorrow. Splinter Cell is a series that has always had trouble straddling the line between realism and something far more important in videogames - fun. Don't get me wrong, Chaos Theory can be very fun at times, but it doesn't seem as if it was Ubisoft's top priority.

Chaos Theory is perhaps the most graphically impressive game I've ever seen on a home console. Near the beginning, I found myself just standing still and staring at a group of wet rocks, in awe of how realistic they looked. In all honesty, there are many sections of the game that appear almost completely photorealistic. Anything involving water looks especially great. During rainy sections, you can see individual raindrops splash against Sam Fisher's suit. Likewise, his suit will appear dry or wet depending on how long he's been in the rain.

Another impressive graphics feature is the new facial expressions. When you sneak up on an unsuspecting guard and hold a knife to his throat, his face reacts exactly as you'd expect it to in real life. Characters' mouths open, and their eyes look back at you in fear. Every small detail is accounted for in this game. For example, you can make Fisher whistle by pressing the Black button. The first time I did it, I thought I noticed his lips purse together as they would in real life. Then I thought "No ... there's no way it's that detailed". After zooming the camera in and whistling again, I realized that yes, it was that detailed. 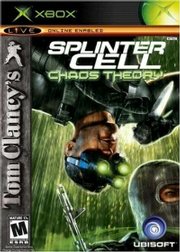 The only odd circumstance with the graphics revolves around the ragdoll physics engine. For the most part, enemies die fairly realistically and fall in accordance with the environment and where they were shot from. Other times, they will fall in entirely unrealistic and awkward-looking positions. Anyone who has played Chronicles of Riddick should be familiar with this. While not a huge problem, any graphical glitch whatsoever stands out tenfold in contrast to this otherwise perfect environment.

Almost as impressive as the graphics is the audio. Voices sound exactly how they should in relation to their environment. If a voice is far away, it will sound far away. If it's to your left, it sounds like it's to your left. Conversations will get louder or quieter depending on how close you are to them. If two characters are talking to each other across a room, and you kill one of them, the other will wonder why he's not responding and inspect. The attention to detail is truly impressive.

The music is fairly sparse in the game (as it should be), but it is appropriate based on the situations. Stealth games require good audio more than any other genre, and Splinter Cell does not disappoint in this regard. The only thing that doesn't make sense is when you're talking over the radio while guards are present. Metal Gear Solid explained this through the "Codec" technology, in which Snake never actually talked. Splinter Cell doesn't attempt to explain this. You can be talking over the radio with a guard two feet away from you, and he won't seem to hear you at all.

Anyone who has played a Splinter Cell game before is probably familiar with the feel of the story. It's more or less an excuse for Sam to fly around the world for each of the ten missions. The story revolves around an algorithm that has the ability to crash the stock markets and hijack ballistic missiles (as well as black out New York for some reason). The programmer has mysteriously disappeared, and Fisher must find him. In all honesty, it's really not that interesting, and I found myself completely apathetic in regards to it. Herein lies the biggest contrast in the ongoing "Metal Gear vs Splinter Cell" debate. Metal Gear Solid is a story-based game with stealth action. Splinter Cell is a stealth-based game with a story on the side. This hurts the game to an extent, as it really doesn't have the same epic feel and interesting characters of all three of the MGS games.

While the story itself may not be that great, the voice acting is very well done. Michael Ironside ("Total Recall", "Top Gun") and Dennis Haysbert (President Palmer on "24") reprise their roles as Sam Fisher and Irving Lambert, respectively. Fisher's voice is absolutely perfect for the role, and every line is delivered with the appropriate level of seriousness or humor (depending on the situation). The conversations between Fisher and captured enemies are particularly entertaining.

Chaos Theory consists of ten missions, and almost all of them hover around the 30-minute mark. You'll spend the majority of these missions in the crouched position, sneaking up on unsuspecting guards. The beauty of the gameplay rests in the sheer amount of ways you can approach it. If you want, you can attempt to just quietly sneak past the guards. If that's not your style, you can choke every single one of them out. The options don't end there, as your wits will be your best friend in this game. I came upon one section in which three guards were sitting in a room playing cards. It dawned on me that I had many different options on how to go about this. I could have held one hostage and shot the other two. I could have whistled to draw their attention. Instead, I threw a flash grenade into the room, blinding all three. As they were disoriented, I ran in and slaughtered them all with my machine gun. It's these kinds of immensely satisfying moments that make the Splinter Cell series what it is.

There is an impressive amount of enemy activities. You'll encounter some sitting down, listening to music, or working on electric circuits. Others will be taking a nap or leaning up against cars. It's nice to see that not every enemy follows the same "walk around the room until Sam grabs you" routine. It's also extremely satisfying to sneak up on a sleeping enemy and put a silenced pistol shot in their head.

Almost all of my major complaints about this game are with the gameplay. Chaos Theory (like the other two in the series) really suffers when the focus moves from stealth to action. If you are spotted, it takes too long to get your gun out and defend yourself, and you're usually dead before you know it. In fact, if you're spotted, it's much easier to just die and start from an old load point than attempt to fight your way out of it. The enemies seem to have a lot of trouble in combat as well. Oftentimes, when looking for cover, they'll stand near a wall, rather than hide behind it. You're left with a guard in full view of your crosshairs who thinks he's hiding. It's disappointing to see a glitch like this in such an otherwise polished game. I don't understand how Ubisoft could spend so much time perfecting the graphics and audio, while simultaneously leaving glitches like this unchecked.

Fisher's new moves are somewhat underwhelming. He has a knife now, which doesn't factor into the gameplay much at all. The "upside-down neck snap" move that has been featured in trailers and magazine ads is rarely used, and it's much easier to just sneak up on them the old-fashioned way. In addition, the map system in Chaos Theory is thoroughly unusable. It doesn't show your position at all, and it's pretty much just an indecipherable mess of green. There are red dots to indicate objectives, but good luck trying to figure out where they are in relation to you.

There are some new gameplay elements that are very welcome. The "hacking" option for some doors and security systems is a decent little minigame/diversion. Also, being able to manually open doors as fast or slow as you wish can be useful at times. There is a Quick Save option that is available at literally every point in every level (which saved me countless times). My favorite improvement in Chaos Theory is how guards respond to dead bodies. In the last two, you could leave a body on the ground, and they'll sound an alarm way later in the level when they find it. It became a tedious task to move every single body into a dark corner of the room. In this edition, you don't have to be nearly as meticulous about this. Unless you kill the guy right in front of another guard, it shouldn't be a problem at all.

The new co-op mode can be pretty entertaining, sometimes moreso than the single-player campaign. It's pretty fun trying to coordinate stealth strategy with two people (and can be hilarious when your genius "plan" fails horribly). The addition of a second player really blows the possibilities wide open in regards to distracting and subduing enemies. Unfortunately, you'll find yourself actually missing the terrible map system, as there is none whatsoever in co-op. Throughout the four missions, you'll find yourselves constantly running around, trying to figure out what to do. Despite this, it's a great new mode that shows a lot of potential for two-player stealth games.

The Spies vs. Mercenaries multiplayer from Pandora Tomorrow returns in this new installment. The game modes on Xbox Live include Disk Hunt, Deathmatch and Story. The spies get the third-person perspective, while the mercenaries control like a FPS. Unfortunately, it's clear that Splinter Cell is a third-person based game, and the first-person controls seem sluggish and unresponsive in comparison. Disk Hunt is a fun mode to play, and co-op missions are also entertaining. Matchmaking is an issue, however, as it takes a very long time to get into an active game. I spent at least 15 minutes just trying to get into a quickmatch.

My initial reaction of Chaos Theory was very positive. Then the boredom started to set in around Mission 4, and later missions did nothing to help the monotony. If you're a big Splinter Cell fan, I'm sure this entry will satisfy you and warrant a purchase. Those who are new to the series or aren't sure about Chaos Theory should probably stick with a rental. In the end, it certainly stays true to the rest of the series: Shining in almost every technical aspect, but lacking in fun.