When Steven Eubank talks about doing shows with "integrity" and "grit," he's not talking about "Death of Salesman."

No, the 21-year-old producer/director wunderkind is talking about his production of "Hedwig and the Angry Inch" - in all of its transgendered-rock-and-roll, mutilated-sex-change glory.

"This is actually kind of a departure from the shows I'm used to doing," says Eubank, a graduate of Southwest Missouri State University who has developed a niche as one of the leading alternative-theater directors in the Kansas City area.

Right. This is waaaaay different than "The Rocky Horror Picture Show" and "Saucy Jack and the Space Vixens."

"This one has a lot of integrity," he clarifies.

Kitsch camp
As past productions attest, Eubank and his extended Kansas City-based theater crew are all about the kitsch factor - so much so that the "Hedwig" announcement probably came as no surprise to longtime fans who pack KC's Just Off Broadway Theater to see the troupe's shows.

Lawrence, however, is still relatively new territory for Eubank. By most accounts, his virgin venture in town - "Rocky Horror" at Liberty Hall in Feb. 2004 - was a rousing success. This time around, there's no reason to doubt the draw of a rock-and-roll musical at one of the town's most prominent rock-and-roll venues.

"They're putting in lawn chairs for us," he says proudly. "We thought 90 minutes to stand and listen to monologues is not probably the wisest idea."

Then again, "Hedwig" not only plays like a rock concert - it is one. The musical features an onstage band and loud, amped-up music that's 10 parts "Spinal Tap" to 1 part "Rent."

"In 'Rocky Horror' you might try to incorporate the band into the set but you never make them the focal point."

For a play that opened Off-Broadway in 1998, "Hedwig" has become a cult favorite in a remarkably short period of time. "Rocky Horror," in contrast, bombed in its initial run and simmered for a 10-15 year period before attaining such a status.

Rock junction
"Hedwig" follows a sexually confused "girly boy" named Hansel who wants out of his - er, her - childhood home in East Berlin. Hansel befriends an American GI who promises to take him to America if he gets a proper sex change. The sex change gets botched, leaving an "angry inch" of scar tissue.

"I've seen 70-year-old grandparents fall in love with the show who would never touch Rocky Horror," Eubank says. "Every time that it hits below the belt and it goes for low humor it also has a significant amount of intelligence and heart." 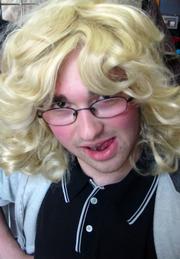 Director Steven Eubank poses as the titular character in "Hedwig and the Angry Inch."

Left alone and divorced in a Junction City, Kan., trailer park, Hedwig rediscovers herself as the glamorous frontwoman for a glam-rock band. Her bandmate and lover Tommy Gnosis steals her heart and then her songs, leaving her bitter and destitute. So begins Hedwig's search for her identity and the meaning of love, as played out during a tour of strip-mall seafood restaurants.

The Kansas references may strike a chord with people who can empathize with director John Cameron Mitchell's real-life experiences growing up in Junction City. Or perhaps audience members will connect with the performance of KU's own Nina Murphy, who plays Hedwig's male bandmate,Yitzak.

According to Eubank, casting a female in the role of Yitzak has become an unspoken tradition since the show opened in New York (actress Miriam Shor was the original Yitzak).

"I actually toyed with trying to cast a man in that role," he says. "Anyone I shared that idea with said, 'You can't do that - that'll offend so many people.'"

Off Off-Broadway
The show will likely be Eubank's last before he moves to NewYork in November to pursue his acting muse.

"Temping and auditioning is kind of the plan," he says. "I've been an only child living with my parents and they've been supporting this theater endeavor all my life. It's time to give them a break."

There, Eubank hopes to work his way into the acting world and perhaps meet a community of like-minded theater people willing to come back to the Midwest and start something fresh.

If that doesn't work out, he can always go back to his summer job at Worlds of Fun.

"It really appeals to me," he says of his role as Spaz the Nerd in the amusement park's production of 'Cleaver High Homecoming.' "I don't know if I should be extremely embarrassed or extremely proud."