Hey, kids, I've got a question for you: what do you get when you take an out-of-date gaming license, add uninspired and confusing levels, and then mix in poorly developed platforming bits, redundant puzzles and braindead enemies? (A) The exact recipe for videogame monotony, (B) An exercise in frustration, or (C) Spy vs. Spy for the Xbox? I'm sorry, the correct answer is (D) All of the above.

Based on the characters from Mad Magazine, the black and white spies return from a very extended vacation in their latest adventure from developer Vicious Cycle. The game features three single player modes (Story, Modern and Classic) as well as both local and online multiplayer support via Xbox Live.

In terms of presentation, the game looks and feels like a cartoon, which is good since its a game about ... cartoons. Explosions create a comical "BOOM!", the levels look whimsical, and silly sound effects accompany all of your attacks. The visuals aren't breaking any ground here, but the framerate's solid and unsticking the camera makes it easy to avoid major camera issues. The Combustible Edison-provided soundtrack gets repetitive and grating. At some points it fits the pseudo-espionage mood, at others it feels like you're playing the game in an elevator.

The gameplay breaks down like this: find item X, flip this switch, jump across the platforms (apparently spies learn how to change direction in mid-air), and fight the level's boss. Wash. Rinse. Repeat. There's no progression in difficulty, either. The first stage is just as hard as the last stage, and the level design is so generic it becomes confusing on where to go. Good thing there's a giant green arrow that positioned over the door you're supposed to enter. At first I hated these arrows because they seemed to dumb down an already simple game, but eventually I found myself relying on them in order to get anywhere. 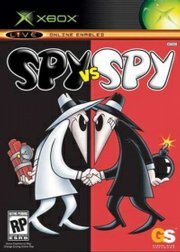 The game also suffers from vague mission objectives in all modes. In single player you're given objectives at the start of a level, and as you progress they change. This is dynamic, but it also becomes an exercise in futility when they use the same description to describe two completely different goals that require different ways of solving them. For example "Destroy all of the Switches" translates into "shoot the generators with a bazooka in one level" and "dynamite the satellite" in another. The goals of both Modern and Classic are not explained, and the player is forced to (gasp) consult the manual.

Multiplayer takes the same story mode levels and turns them into death match arenas that support up to four players online and off. That's too bad, because if the game allowed for sixteen or even eight players setting traps and blasting away with rockets and tommy guns it could get frantic and, dare I say, fun.

In the end, that's what kills Spy vs. Spy: it's just not fun. While its variety of modes and online support are welcome features, any novelty is quickly lost thanks to muddled level design, unclear mission objectives, and repetitive, dull gameplay.