A standard arcade racer bolstered by fun physics and side games

They say imitation is the sincerest form of flattery, and if this is the case, the Burnout series should feel heavily complimented by FlatOut. The developers at Bugbear seem to have taken the basic ideas of the superb Burnout 3, moved them to a rural environment, and made it far less fun.

FlatOut has one unique thing going for it, and that's the physics engine. There's a huge amount of environmental objects scattered across the 40+ tracks, and all of them react appropriately when hit with your car. See that huge wall of tires on the side of the track? Run into them and you'll witness every last tire realistically fly into the horizon, bump into each other, or simply crumple over (depending on the speed of the impact). Turbo is acquired by running into as many things as you possibly can. This can be deceiving though, because that pile of logs you're speeding towards could do one of two things when you hit it. The desirable scenario is that you'll plow through them with no speed loss, and you'll get some of your Turbo meter filled up. The alternate scenario involves them barely budging, and you spending valuable time trying to get yourself back on the track. It's sometimes hard to ascertain the consequences of running into the environment, and this problem can definitely result in you losing races. 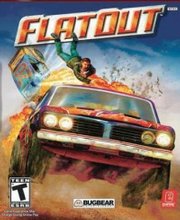 While this game clearly wants to be as good as Burnout 3, it really falls short in almost every way. There's no white-knuckle intensity in FlatOut, it just seems like a semi-casual stroll down some country roads. One of the things that made Burnout 3 such an amazing arcade racer was the unsurpassed sense of speed. Even while turbo boosting, FlatOut just seems sluggish and boring. When you're racing a fully-upgraded powerhouse of a car at turbo speeds, you should certainly feel a sense of danger and suspense. FlatOut completely fails to create this feeling.

Racing is a chore, as it constantly feels like you're driving on ice. Even when you fully upgrade your cars' handling and tires, it seems like you're sliding all over the road at every turn. Crashing is a frequent occurrence, and it takes far too long to get back to full speed. Adding to the frustration is the "driver ejection" gimmick. While admittedly entertaining at times, it becomes old quickly. Your driver is too prone to shoot out of the front window at the tiniest bump, and watching his flight costs you valuable racing time.

The tracks are typical rural fare, including woodland courses, dirt tracks, and circuit races. They're fairly linear in nature, with few shortcuts or detours. Every once in a while, you'll encounter ramps, but they're a definite gamble. Going up one of these will more often than not flip your car, eject your driver upon impact, or send you straight into a wall. After several failed attempts, I wound up altogether avoiding the ramps.

It's too bad the gameplay suffers in several key areas, because it's a very nice game to look at. Environments are crisp and clean, with no draw distance issues. Your car shows an amazing level of detail when it comes to damage. By the end of some races, you'll wonder how your mangled metal frame of an automobile is still drivable. Hitting other cars results in a shower of metal and debris, and the aforementioned environmental objects show similar flair upon impact. Sound effects are appropriate, although nothing particularly new. Unfortunately, it seems that a terrible soundtrack is required for any new racing game, and FlatOut doesn't stop this recent trend. It only took a couple of races before I turned the music off for good.

Outside of the basic race modes are several bonus mini-games. These are initially funny diversions such as Human Darts, Bowling, and High Jump. Most of them involve you speeding down a straightaway, then releasing R1 at a particular time to eject your driver towards the dart board, bowling pins, or whatever the target may be. There are also a couple of "Destruction Derby"-esque minigames, but these are even more tedious and slow than the races. Most of these are worth trying once or twice, but they quickly grow old.

These bonus games earn you money that you can use to upgrade your car. The upgrade system is pretty bare-boned, and simply features basic parts (tires, suspension, drivetrain, etc). Midnight Club 3 proved how much fun extensive customization could be, and FlatOut falls short in this regard as well. There are 16 cars, all with goofy names like "Pepper", "Blockhead", and "Bonecracker".

It's truly hard to recommend this game to anyone in particular. If you're a fan of arcade racing, throw down $20 for Burnout 3 (if you haven't already), or just wait for Burnout Revenge. Maybe FlatOut would be worth picking up if it had a MSRP of $20, but certainly not at the current $50. The lack of a palpable sense of speed and danger truly takes away from this gaming experience, and there are tons of arcade racers out there that feature far more entertaining aspects than driver ejections and destructible environments. FlatOut is an uninspired and monotonous racer that I'd advise avoiding.