Our budget guide to the pitfalls of being a freshman...or someone who acts like one

We're not self-righteous enough to think we can talk freshman out of doing all the stupid things they're going to do.

In fact, we'd rather those things were fully experienced as freshmen than have more middle-aged homies out there trying to relive those lost beer-bong years.

So here it is, your freshman year to-do list:

Get kicked out of the dorms

Nothing ruins a keg party like a blue slip from your RA.

Kristen Wirsig handed out plenty of them during her two years as an RA for Corbin Hall. Wirsig applied for the position thinking it would be a keen way to positively influence her peers. Instead, she discovered that the most she could do was hold her peers' hair back when they came home tanked.

"They never wanted to hear 'be smart' when they went out because they were planning on not being smart," Wirsig says. "They always had plenty of sob stories to tell after they came home. You could be there for that, and hopefully when they were sober they might remember that you had something good to say." 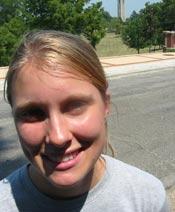 "People who are drunk just don't have the best judgment so they have a hard time hiding what they're doing," Wirsig says. "You walk past the door and you hear, 'Do another one! Do another one!' and bottles clinking."

"Everybody knew the rules," she says. "They would try to say that they didn't, but they did."

If it's hard to imagine a punishment worse than getting kicked out of the dorms in the middle of finals week, Wirsig can recall at least one resident's experience ...

"She came back from a Halloween party with her sorority and she was wearing a Texas flag that was completely open in the back," Wirsig recalls. "I don't think she went to class the whole next week. She left after her first semester."

Drink. Pass out. Repeat as necessary. 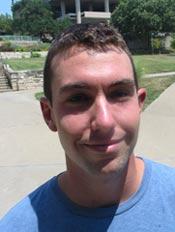 Jerrod Commerford is no slouch when it comes to boozing, but the KU senior has learned to pace himself in his old age. His advice for freshman: "You're going to get in trouble if you mess shit up."

Not that Commerford ever got in trouble for drinking in the dorms. He had a close call with a police officer once, but he just redirected the blame to another resident.

Commerford's "advice" on dorm boozing may be clouded by years of brain-cell bashing, but he's far more clearheaded when it comes to advice on drinking responsibly.

"If you're going to go out and binge drink and be crazy, just be with people you know and can trust so there's someone there to take care of you," he says. 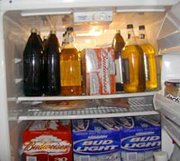 Though Commerford managed to steer clear of alcohol poisoning, he does recall regrettable nights where he pushed his limit a little too far.

"For me personally, that was probably the biggest pitfall - having those black spots, doing a little time traveling," he says. "If your friends are like, 'What happened to you last night?' and your only response is, 'I don't know' - that's a bad feeling."

"(My roommate and I) met him on a Saturday and we went in his truck to the middle of the country with a bunch of beer and pot," Carson recalls. "We basically went crazy. Looking back now, I think, 'Oh, my gosh - I could have been taken advantage of.'"

It wasn't so much the embarrassment of failing community college courses that caused Cody Kratzer to stop procrastinating - it was the money. 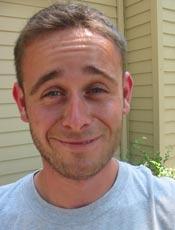 "I lost hundreds of dollars," says Kratzer, who will arrive at KU as a junior after two years at Butler County Community College in Wichita. "That's an easy college anyway so the last thing you need to do is waste your time by dropping classes."

Kratzer's pitfall was long-term assignments. If something was assigned a month ahead of time, he'd wait until two or three days before the due date to get started. By the time he got his crappy grade back, it'd be too late to get his money back.

After a forgettable freshman year, Kratzer wised up. His solution - get a job.

"I know it sounds crazy, but just doing something productive all day long and getting paid puts things in perspective about making money and not wasting it," Kratzer says. "I felt like I could actually write a paper if I asserted myself."

Rack up some credit card debt

Seriously - what are you going to do with a Discover Card t-shirt?

If you put your real name on applications for credit cards you don't even intend to keep or use, a mountain of trouble can ensue. Some of these overzealous spenders turn to Chris Burk, a certified credit counselor with Housing and Credit Counseling Inc., a statewide nonprofit agency.

"By the time we see them they're probably juniors or seniors and they've had these cards for awhile and it's gotten out of hand," Burk says. "I've had a student come to me with five credit cards and about $3,000 on each."

According to Burk, the snowball effect that can drive a student into debt works something like this:

Students are particularly vulnerable to credit cards because they have a shortage of expendable income and are tempted to use it for everyday purchases, Burk says.

"If they bring in their statements you see a lot of restaurants, stores and clothes," he says. "Nowadays you can go to McDonalds and use your credit card and you're paying for that Big Mac for the next 3-4 months."

Burk encourages students to only use one credit card and make payments in full whenever possible. Good things come to those who use credit cards responsibly - like house and car loans post-graduation.

"It's really a double-edged sword," Burk says. "Credit cards are a really good tool ... it's just a matter of self-discipline."