It gets better, it really does.

The developers who brought us Mary-Kate and Ashley Sweet 16 for the Gamecube have been hard at work for a few years on a title that couldn't be more opposite, packing in mature themes, blood, violence and, well, actual gameplay. It's more than a bit worrisome that Nintendo has entrusted such an important and promising new property like Geist to such a developer. Still, the result is a fun and original first-person gaming concept hindered by wonky controls and lackluster production value.

John Raimi, a chemical/biological threats specialist, has been ordered to investigate the happenings at the Volks Corporation in France. Accompanied by hired guns, you must search the lab for evidence of the corporation's illegal meanderings into cell mutation. Once you find the evidence, the game essentially begins, throwing John into a heated gunfight. And boy does the game come out stumbling. The shooting mechanics are bland, uninteresting and are hampered by unavoidably sluggish controls. Luckily, yet unfortunately, the enemy AI is so stupid that you'll have plenty of time to wrestle with the controls to line up a decent shot. 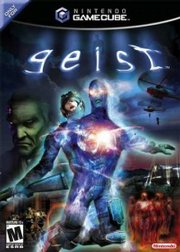 If this was the heart and soul of Geist, it would fail miserably. But after completing your first mission, John is captured and transformed by the Volks Corporation into a slickly blue apparition that can possess anything from explosives and mop buckets to dogs and other humans. The heart of the game is spent floating as the "Geist," looking for things to possess and control to figure out how to advance. To possess living beings, they have to get scared first. To do this, simply look around the room for objects to possess. Once in an object, you will get a dialogue of buttons that will perform certain actions. Usually one may draw attention and you'll quickly have to possess another nearby object to give the final scare. Once a living being is totally frightened, you can possess it and all of its abilities. Many of the possessed carry guns where the super-blah controls ensue.

Like aged wine, Geist gets better with time. The puzzles get more interesting. Figuring out what to possess and when to get abc to do xyz is the bulk of the enjoyment. The environments start to get more complex and simple 1,2,3 puzzles are replaced with more challenging jigsaws. This is Geist's saving grace. Upon first play, it seems like first-person shooting may be its core. As you dive deeper, shooting becomes almost tertiary to possessions and puzzles. Also, when you possess people, you can get short glimpses of their memories, adding pieces of the story to the big picture. These elements also get better the deeper you get. It's as if the second half of the game had an entirely different development team.

There are also boss battles. Many of the character designs are rudimentary. Some are actually pretty cool, although most of these encounters don't fit into the overall story arc like they should. These battles are at their best when possession elements are at the core of the boss's demise. It can't be said enough, when victory depends on aiming and shooting, fun fails to happen.

Aesthetically, the game is average. It's a concoction of underwhelming and bland level art, but then spots of sheer brilliance and character design. Even though the art direction is spotty, the varied locales and the spanning of the color palette do seem to fit within the Geist universe, surprisingly. The action tends to get bogged down in spotty framerates when there are several characters on screen and projectiles flying everywhere and some enemies tends to get stuck in floors and walls for no apparent reason.

The music is also very bland featuring very forgettable melodies with no real sense of heart in the production. The sound effects have been used and overused in many popular games to the point that Geist really loses any chance of auditory identity.

And then comes the bonus. Multiplayer isn't bad. For as much as I harp on the sluggish controls, the three modes use the possession abilities successfully. Sure, there is no online mode, but splitscreen is fun with three friends and even playing solo against computer-controlled bots is quite fun. Ironically, the multiplayer bots boast better intelligence than any enemy in the campaign. In Possession Deathmatch, you possess hosts and use their abilities to kill your friends. You may also possess objects, too, for the kill which makes fragging much more interesting. Capture the Host has you scoring points by possessing hosts to eventually exit their body when you've reached a base. Finally, Hunt provides a ghosts-versus-humans landscape. Humans try their best at ghost busting with special weapons, trying to keep the ghosts from possessing them and forcing the humans' bodies into environmental hazards. In the world of tacked on multiplayer, Geist's version is inventive and it works:a rare combination.

To play Geist is a declaration of patience. Know that you'll have to sit through cumbersome shooting controls and a rocky first few levels to get to the gold. It's not the most technically pleasing of games, but make no mistake, Geist is worth the few initial cusswords to reveal the rewarding, core possession mechanics. Geist is a must-play not only for Gamecube owners, but anyone that wants to experience an original concept in first-person gaming.

Yo! Matt, this is Jonathan, Brandon's loving nephew from the wedding. Just writing to say hi and read your review. I've wanted this game, but with me being on a tight budget I can't experiment with this game (I'll just have to save to get Advent Rising on PC!! WOo!). But really, the main topic of conversation I have is why I hate Nintendo. THEY DELAYED ZELDA! I was so pissed! Oh geez, it ruined my day. No holiday release for Nintendo this year, becuase they scared little punks and think they can't compete with the 360!!! C'mon Reggie show some BALLS!! Need more time my ass! Well what do you think of all of this Matt?

What's up man? Good to hear from you. Yeah, I am severely disappointed in the Zelda delay, especially since there are no surefire winners for the big N this holiday season. But, I am not surprised, either. The same thing happens to most Nintendo releases. Happened with Wind Waker. Honestly, I don't mind the delay if they're legitimately adding new levels and bosses and they profess.

I guess they can legitimize there delay for a better product, but us as consumers won't REALLY know if they are adding new stuff, or they're just really scared of the 360. I think the real reason the delay is happening is becuase Nintendo thinks they can profit more from it being in a slower month with no competition, but that leaves no holiday release. Isn't that a horrible marketing move? The average consumer would rather buy a 360 now than wait for Zelda. Look what happened to RE4, it didn't sell well and Capcom ported it to the PS2 becuase it was a freakin January release! Now obviously Nintendo won't be porting the game, but in the minds of an average gamer Nintendo will be thought of as a company backing down to the newcomers. Nintendo started it all, and yet they're just blowing all there aces away nowadays! Geez, Reggie needs to shake some more up and of get that asshole Iwata off the chair! Anyways, needed to rant to somebody, peace!