Construction continues on the interior of the Hobbs Taylor Lofts building as Jeremy Desch, 26, cuts pieces of steel framing Friday afternoon on the ground floor of the building, which is making steady progress toward completion. The building will house commercial and office uses on the ground floor and will have 32 condominiums in the upper floors, which will start at $200,000.

Now they can't even see the sky.

The new Hobbs Taylor Lofts - five stories tall and running a half-block in length - are a big new addition to downtown. Construction is nearing completion, and developer Bo Harris says he expects the first residents to move in early next month.

"I think it's going to have some meaningful impact on downtown Lawrence," Harris said last week.

In fact, Harris and others say the project could be a template for future downtown development: commercial and office uses on the ground floor, with upper-floor luxury condominiums - starting at $200,000 per unit - bringing well-to-do Lawrence residents close to Massachusetts Street to live as well as play.

"Look at any vibrant city and you'll see a lot of residential units in the immediate area of the commercial district," Mayor Boog Highberger said last week.

Back across the street, though, longtime businesses like The Bottleneck are now in the shadow of the new lofts. And some of their patrons are concerned the expensive new building could gentrify their old haunts out of existence.

Jayne Montgomery, a Bottleneck regular from Kansas City, stood outside the club Thursday night as music throbbed onto the sidewalk from inside.

"If people are trying to sleep and stuff at night, they probably wouldn't want to live right next to The Bottleneck," she said. "Because it's really loud."

But Brett Mosiman, The Bottleneck's owner, says he isn't worried. He expects a good neighborly relationship with the new lofts.

"I think most people are well aware they're going into an entertainment zone," Mosiman said of the lofts' new residents. "I think, very frankly, we'll be a very good neighbor to the people. We've been here 20 years, and they're not even there yet."

Harris said he has sold 26 of the project's 32 condominiums, with prices varying according to apartment size, but reaching as much as $450,000. The new residents, he said, know what they're getting into. In fact, he said, windows at the lofts were built to be soundproof; it will be hard for residents to hear street noise.

"I imagine those people would have the same rights as people in any neighborhood," Harris said.

La Familia manager Aaron Morrell isn't sure what to expect of his new neighbors.

"I don't think it is going to gentrify the neighborhood right away or displace people," he said. And the business seems ready for the long haul, installing a new sign and awning out front last week.

But he added, "It is a period of uncertainty right now. So people are waiting."

Among Morrell's chief concerns: that Harris' $9 million building will increase property values on nearby commercial buildings, pushing owners to raise rents and making it hard for renters such as La Familia to stay. 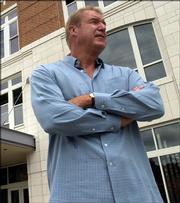 Developer Bo Harris, of Harris Construction, is optimistic about the Hobbs Taylor Lofts development and its impact on downtown Lawrence.

August Detbern, in the Douglas County Appraiser's Office, said that's unlikely. The Hobbs Taylor Lofts project, he said, is a different animal than any of its neighbors and therefore will be appraised differently.

"It probably will have a very minuscule effect on them," Detbern said, "because we're talking about two entirely different appraisal projects."

'Going to help us'

"I think people who are permanently living downtown - who are making their home in the downtown footprint - is fantastic," Martin said.

"It's like any neighborhood. When you move into a neighborhood, you take pride in it, you pitch in to help, you do things to help provide the ambiance that you're looking for," she said. "They're going to help us, in the long run, just by being there."

The exterior of the Hobbs Taylor Lofts building is nearing completion.

She doesn't expect that the lofts will push students or less-well-to-do Lawrence residents out of downtown.

"I think downtown has always had a wonderful mix, which is for everyone," Martin said. "I don't think it's going to be a one-type area, just higher-end."

"More people living downtown," he said, "will help the long-term vitality of downtown."

Harris hopes so. If the Hobbs-Taylor lofts are successful, he said, similar projects could follow.

"I expect we'll see more of this type of product in downtown Lawrence," Harris said. "We think it's servicing a demand that's there. It was certainly a new market, but it's proven to be the case that there are people wanting to live in downtown Lawrence."