Finding a good student job in Lawrence is a lot like riding the world's biggest rollercoaster - a great thing to brag about when you're done, but a hard knock to the gut while getting over the hump.

Lawrence's broad array of corporate and locally owned enterprises ensure that there's plenty of dough for the taking. The catch, of course, is that all the other student workers want a slice of the part-time pie.

To help prospective grunts learn the lay of the land, we set out to interview current and former students who have already navigated the many forks and fjords of the Lawrence job market. Here's hoping you never have to hear the words "minimum wage."

Please note: These conversations are paraphrased - they are not verbatim transcripts. 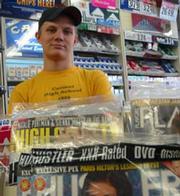 Phil Wisniewski, 21
Gas station clerk, $6.50/hr.
It's the easiest job you'll ever have, but it doesn't pay shit. Expect to call the cops at least once a week, mostly for people trying to steal stuff. I'd like to put out a tip jar, but if my boss came in and saw it he'd probably fire me. I made $9.00 an hour when I worked as a cook at On the Border but that really sucked. You're basically busting your ass working in a hot kitchen. Even after you close you spend two hours scrubbing stainless steel. The gas station is more relaxed and I don't have any managers breathing down my neck. I'd rather have the low-paying easy job than the higher-paying bust-my-ass job. If I didn't have a DUI to pay every month, I'd be fine. 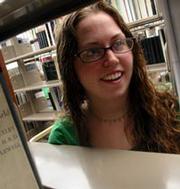 Sara Dixon, 22
Lawrence Public Library front desk, $7.00/hr.
I love the library. It makes me feel useful. Yesterday I actually sat and helped this guy enroll in all his classes online. The bad thing is that you can only get 19 hours a week because otherwise they'd have to give you benefits. I'm just glad that I finally a niche and I've been able to stick with it. I hated waiting tables. 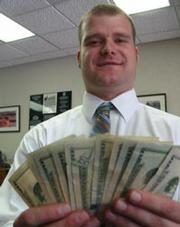 Jake Weiter, 25
Lawrence Bank teller, $9.50/hr.
Banking is pretty simple overall. The worst part is the repetition. You get so tired of saying the same things, looking at deposits and counting cash. You also have to put up with customers' bad jokes, like when you ask them how they want their money and they say "hundreds" for a $40 check. I'm sure there are plenty of worse things I could be doing, like washing dishes or picking up trash or doing construction out in the heat. I figure I couldn't find a better paying job; it took me five years to get to where I am now. You learn pretty quickly not to steal the money, unless you want to go to prison and be some bad man's boyfriend. 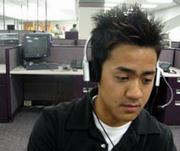 Ngoc Son, 20
Affinitas telephone sales representative, $8.50/hr.
I think it's the perfect college job. It's easy - you just sit and get paid. During school I read my assignments between calls. If you need days off for exams or something you just have to put in a two-week notice. The schedule also works well: four days during the week from 4-9 p.m. and Saturdays from 9-4 p.m. Basically my job is to call telephone customers and see if they want to upgrade their plan. Once you know the script you don't even need to look at the screen. Usually I'm just like chilling and reading; I don't really pay attention. I'm not getting commission for it, so whatever. Some people get mad when callers cuss you out but I just brush it off. It makes the day go by faster. If you're one of those people who hate getting yelled at, this job is going to wear you out. 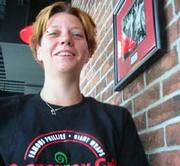 Shawna Liscer, 24
Pepperjax Grill shift manager, salary undisclosed
I paid for my first two years at KU by working at a Chuck E. Cheese's in Topeka. I was making like $8 an hour and I couldn't find anything in Lawrence that would pay anything close to that. You could kind of go in and act like an idiot and no one would think much about it because you were "playing with the kids." There were plenty of days when I wanted to leave and never go back, but it's like that anywhere you work. I started at Pepperjax during my senior year at KU. We get some people that come in for job interviews and it's like, "Um, you wanna work here and you're coming in with some really big holes in your pants and they're falling off?" Not that I care, because that's kind of how I dress when I'm not at work. But when you're trying to get a job don't go in looking like you just rolled out of bed, especially if it's like 1:00 in the afternoon. 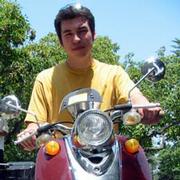 Jon Rosselle, 22
Best Buy media clerk, $10/hr.
I've been at Best Buy for three years now so I make better money than most of my coworkers. It's really not a hard job. All I do is sell video games and systems to college students and families. I meet cool people and I see people I know all the time. The only thing that sucks is working until 11pm on Saturday and having to be there at 7am on Sunday. I actually drank four Red Bulls once, but I got really sick because I had too much caffeine in my system and I was all wiggin' out. My goal in life is to not ever work retail after I get out of college. I think Best Buy should be indebted to me for putting up with that place for three years. I can't believe I've worked there that long. You just made me really depressed. 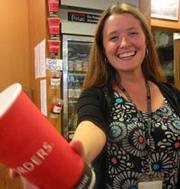 Allison Kaut, 22
Borders cafe barista, $6.50/hr.
It was pretty easy to get a job here. The guy that hires is a theater guy and I'm a dance major so that might have had something to do with it. It's a good atmosphere - I like the fact that it's downtown. They're really flexible and it's laid-back. I make up to $12 in tips once or twice a week and I use that money to go out. 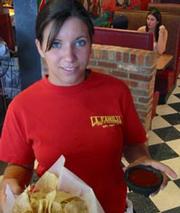 Jasmine Myers, 20
La Familia waitress, $2.25/hr.plus tips
I love it here. It's not like your typical big chain restaurant. I had a friend who worked at Longhorn Steakhouse and she hated it. I'd rather do this than retail because you walk out every night with money. If you work a Friday or Saturday night you can make $100 or more in tips. I do dread it sometimes, like today I have a double shift - I'm working 11:00 to 3:00 and then 5:00 to close. The other bad days are if you're really sick or tired and you come in and your tables aren't nice to you. 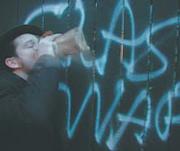 Rob Gillaspie, 29
Quintiles human guinea pig, about $100 a day
I'm making more money at Quintiles than I do working. One month I did 18 days and made $2,700, which is more than I generally make in three months working. I paid off my rent for four months in advance. I used to have a standard policy where I would not test anything that wasn't a sedative, a muscle relaxer or a painkiller, but now that it's all that I do for a living I can't really afford to be picky. I've done so many worse things to my body, like put stuff in it that was probably smuggled over the border up someone's ass. You put it in that perspective and you're like, 'Well, this at least has been tested by the FDA on prisoners and animals before it got to me.'

Look for future "Captive Audience" columns, wherein we stake out various community spots and corner people into an interview on a different topic.

I feel bad for the guy who is being used as a human guinea pig...that can't be good for the body...right?