Laura Moriarty cannot hook you up.

The Lawrence-based fiction writer who authored "The Center of Everything" does not possess insider info that will land you a lucrative publishing deal. Nor does she hang with an elite entourage of publishing mavens with whom she could drop your name.

"People come to my readings and ask, 'How'd you get your agent?' like it's this stealth thing I did," says Moriarty, 34. "All you have to do is write ... they'll read the first few pages of everything because they're looking all the time for new talent."

As Moriarty has learned, first-time fiction writers do get published. After eight years of priming and primping "The Center of Everything," Hyperion purchased the book for $400,000. Once the amount leaked into the press, Moriarty suddenly found herself the target of every up-and-coming writer seeking advice on how to get into the industry.

Her advice: write a frickin' book.

"My mother always says, 'I think everyone has a book in them,'" Moriarty says. "Well that's true - I know a lot of people who are better storytellers; who are a lot more interesting; who are a lot more clever than I am. The reason that I have a book published is because I sat down and wrote it and rewrote it until somebody wanted to pay money for it." 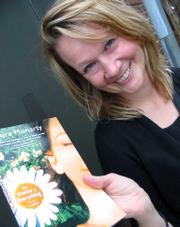 Laura Moriarty is the author of "The Center of Everything," a fictional story about a girl growing up in a small Kansas town. Moriarty spent eight years writing her novel before landing a publishing deal with Hyperion books.

Center of attention
For the next few years, Moriarty will be raising her 17-month-old daughter on a fiction writer's wage.

Her two-book contract should carry her comfortably into her 40s, though she's quick to assert that $400,000 seems a whole lot smaller when half of it goes to taxes and her agent. Add in the skeptical mortgage companies and the cost of health care for a self-employed mother and the math quickly dictates a decidedly modest living.

Still, Moriarty has reason to celebrate each day when she sits down in her home office to outline plans for her next novel. She spends time with her daughter whenever and wherever she chooses, and her only obligation is to write another book that's better than her first one.

Moriarty is trying not to feel the pressure, but it can be hard to ignore.

"I think the only people who can really relate to what it's like are people who have written a dissertation - that kind of endless pressure," she says. "Sometimes you just don't know how to do it and you're sure that everything you're doing is dumb. It feels like everyone else has office jobs where they get to dress up and talk to people." 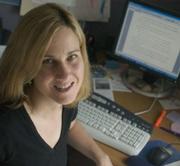 Romance writer Amy Knupp will release her first novel "Unexpected Complication" in May 2006 with Harlequin books. Knupp is pictured in her home office with her friendly companion Oscar.

"There's a fear of not selling enough; fear of bad reviews," says Knupp, a 34-year-old mother of two. "I'm afraid if I see a bad review it's going to make me freeze for a few days and overanalyze."

For the time being, Knupp's apprehensions are secondary to the thrill of signing a deal with Harlequin - the one-and-only publisher she was courting since she began writing three-and-a-half years ago. Harlequin flatly turned down Knupp's first book before agreeing to take a second look at "Unexpected Complication" with the condition that Knupp make some major revisions.

"I think a lot of people at that point would probably throw their hands up, because I was tired of the story," Knupp recalls. "But you kind of get a renewed enthusiasm for it when you have an editor saying, 'Try this and we'll look at it again.'"

So Knupp plowed back into her story, overhauling her secondary characters and changing the plot. She stopped watching TV and even scaled back her allegiance to KU basketball, keeping a tight schedule after the kids went to bed.

"Persistence is what got me the sale," Knupp reflects. "The hardest thing is discipline; I think writing every day is key." 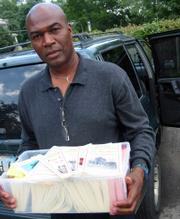 Napoleon Crews is the author of more than a dozen "dime" novels and the proprietor of Fireside Novels Press. Crews distributes his books by driving to 21 stores across Kansas and maintaining a cross-country list of sunscribers.

Napoleon dynamite
For every author who hooked up with a big-name publisher for their first book, there's likely a handful who published it themselves.

Napoleon Crews founded Fireside Novels as an outlet for his 40-page "dime" novels (they actually cost $3.50). Though the genre's heyday dates back to the 1850's, Crews found it to be a perfect match for his adventure-packed tales of historical fiction.

Crews, 55, has been writing for 14 years, but it wasn't until last year that he decided to publish his stories. Each time he releases a new title, he hops in his Jeep and drives to 21 stores across Kansas to distribute it. He maintains a subscriber list that reaches as far as Hawaii, and his books are prominently featured in local stores like Borders and Hastings.

He performs this routine diligently with the hope that someday he'll catch a break and sign a deal with a major publisher. In the meantime, he says, it's the perfect way to hone his skill and get feedback from local audiences.

"With each one I get a little more confidence that I'm on the right track," Crews says. "And all along I'm developing this backlog of stories that probably can be sold in the future."

Crews is optimistic about the prospects of his latest project: a three-installment account of John Brown that follows the enigmatic rebel from his arrival in Lawrence to his journey to Harpers Ferry. He says he was partly motivated by the timeliness of the subject - a major consideration for publishers.

"It could be a breakthrough," he says. "I'm sitting here hoping and praying that it is, but you never know."

To that end, Crews spends much of his time sending out manuscripts to agents and publishers. He uses the internet to research prospective buyers, avoiding sites that charge fees for lists of publishers. If he feels like doing it the old-fashioned way, he goes to the library and checks out a book called "The Literary Market Place."

"You can't afford to say, 'It won't work; they're too big; they're too busy; why would they talk to me about my little old story?'" Crews says. "If you think like that you're done before you start." 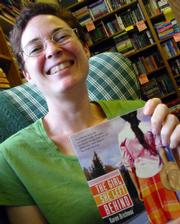 Last month, Karen Brichoux released "The Girl She Left Behind," a coming-of-age story that follows a young woman returning to her Montana home. Brichoux's fourth book "Falling Into the World" will hit stores in October 2006.

Maturation anxiety
Though publishing deals are sometimes viewed as the Holy Grail of a fiction writer's career, there's obviously no guarantee that a deal will launch an unknown writer into the best-sellers list.

Lawrence author Karen Brichoux sold 18,000 copies of her first novel "Coffee and Kung Fu" thanks to a deal with New American Library. The modest yet encouraging returns earned her two more books with the publisher, and she's now settling in to write a forth.

Brichoux is grateful that she no longer has to work the data entry jobs that financed the early stages of her writing addiction. Her career path, however, depends largely on the efforts of her agent, editor and publisher - all of whom reside in New York City.

"I trust my editor a great deal, but it's still a gigantic conglomerate and she has to do what's best for her job and the company," says Brichoux, 37.

When it comes to the content of her books, Brichoux is in control. Her editors never suggest subject matter and usually let her have the final word when it comes to copy editing.

Brichoux's front and back covers - along the rest of her in-store promotion, advertising and distribution - however, are up to the publisher. She has very little input when it comes to presentation of the book - a situation that left Brichoux distraught during the release of her second book "Separation Anxiety."

"It looks like a romantic comedy from a Teen Magazine spread," she says. "I was unhappy with it, but I didn't think it would matter that much. Low and behold, it does matter."

When readers didn't get the "fun little romantic comedy" that the cover art promised, they rebelled and even went as far as to send nasty letters, Brichoux says. The book failed to match the sales of "Coffee and Kung Fu," and Brichoux ultimately split with her agent on the basis that she didn't fight to change the cover.

Even more precarious, Brichoux says, are the months when her books are released and New American Library decides how much to invest into promotion: Will her books appear on the "new release" table at major bookstores? Will they be advertised in major magazines? Or will she have to buy ads herself?

"If the books bomb, I won't get another contract,'" Brichoux frets. "It will be very difficult to sell another book because everybody in the industry is going to look at those numbers and say, 'She's not a good seller.'"

Though such apprehensions occasionally overwhelm the joy of waking up and writing, Brichoux is careful not to take her hard-earned privilege for granted.

"I absolutely love it," she says. "Every single book is different - you're in a whole 'nother world with a whole 'nother group of people and you're learning how to write better than the last one. It's great fun."