Does the DS do the highly-touted RPG series justice?

The DS: Has the best games of the holiday season

It's time to break all known rules of role-playing games again. That's right, Mario and Luigi have returned from their wild Superstar Saga to go back in time, teaming up with their baby-selves in Partners in Time on the DS.

Mario has a healthy RPG lineage with the Paper Mario and Mario and Luigi series. Partners takes lessons from each of the past titles, refines them and delivers yet another uniquely satisfying package that is not only the best in the series, but stands out as another surefire holiday winner for the DS.

Poor, poor Gamecube. The DS is trouncing you. 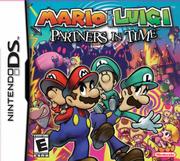 If anything can be leveled against Partners, it's that the story, although different than most Mario adventures, is nothing new. You need to collect shards that have been scattered back in time and you're being hunted by an alien race known as the Shroobs. This time, the Koopa clan finds itself on your side, being attacked by the same baddies. Of course, this sentiment doesn't last and you must travel back and forth in time to complete your shard-collecting.

In traditional RPG fashion, you'll traverse vast overworlds encountering enemy after enemy where battles take place in a turn-based environment. Unlike traditional RPG fashion, after you select your attacks, you aren't left to the roll of the dice to determine your outcome; the actual attacks and defensive moves are 100% interactive. If you choose a simple jump, pressing a button right as you hit the enemy will increase your attack power. Inversely, when an enemy attacks, you can learn when to jump to avoid the attack. If you're quick enough, you can time it to where you deliver a counter blow. 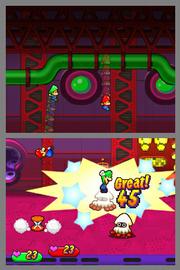 Sure, this all sounds familiar, but it's not until you meet up with your baby-selves when Partners really puts the growth of the series on shining display.

When in a battle with all four, the babies are piggy-backed on their respective elder iterations. Items like a green shell which used to be able to be kicked back and forth between Mario and Luigi now become more powerful when one of the babies rides it. When the shell is just about to hit the enemy, you simply press the corresponding baby's button to unleash an extra attack. So as the green shell speeds up, you have to be quick with the Mario and Luigi buttons to keep kicking the shell in play. Another example is where if baby Mario was alone for his hammer attack, it wouldn't be as effective as if he was on big Mario's back. Then there's a button press for Mario to lift the baby up, then a second button press to deliver a higher, more devastating hammer blow.

Each item is augmented in some shape or form by having all four brothers in a battle. It's so gratifying that I want to talk about each and every different combo-attack experience since they all deliver a unique satisfaction. But this review would be way too long. The button combinations increase and are easy to learn thanks to the wonderful guides that appear on the top screen, but are harder to master. It's this type of smooth execution that take the Mario and Luigi series to the next level. Let's not forget that you tend to learn new moves all the time, so it's fresh almost the entire journey. 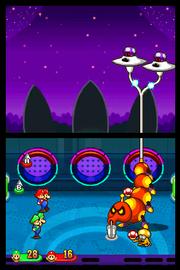 Like before, there are clothes and badges to equip that enhance certain qualities of the character. There are different sets for babies and big ones this time around, so there is a bigger element to keep track of. If you want to stock up on items and health elements, there are shops where you can spend your hard-earned coin to stock up.

One of the most ridiculous critiques I've heard is that Partners doesn't need the stylus, therefore it doesn't need to be on the DS. Have people forgotten that DS stands for Dual Screen? It should be, umm, obvious that the DS's main feature is in two displays. Castlevania: Dawn of Sorrow proved that not having to switch back and forth to your map is a priceless addition to any adventure.

Not only does Partners use the top screen for the navigational aspects, but also for cinematics and most importantly, as a second gameplay screen when the babies have to traverse elsewhere apart from the big brothers. Many times the babies will be the only ones capable of getting to high places or nook and crannies, so the action will take place on the top screen while big Mario and Luigi stay on the bottom. With a press of a button, you can control either the top characters or the bottom. Many puzzles use the dual screen feature to its fullest extent. These situations not only come up often, but deliver a one-of-a-kind satisfaction you won't find in any other title.

The brothers four also have abilities in the overworld as well. Extended jumps, underground movement, water drinking/spitting and many other abilities will have to be learned to overcome several platforms and obstacles to even get to the next battle. These elements do away with any typical RPG-esque boredom of traveling from room to room and are a big part of why the Mario RPGs deliver game after game. 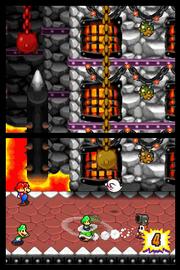 There are several boss battles which deliver even more unique gameplay. Many times it's not as easy as to select the boss and attack; you have to use other environmental factors or other on-screen enemies to extinguish the oversized antagonist. Although some of the battles seem to go on for longer than they really need to, the satisfaction level is just as high upon victory.

Sometimes, humor in the Mario universe is hit or miss, bordering on the line between stupidly cheesy and delightfully charming. Thankfully, Partners comes out of the delightfully charming camp with fervor. This has to be one of the funniest Mario games in a long time. The wit is sharp, the humor is warm and it can connect with the most cynical of gamers. Smart stuff.

Partners sports great-looking character design, models and fantastically expressive animations. Sure, it's not pushing the hardware to its fullest potential, but what we get is a slick, colorful and otherwise beautiful package. The sound tends to follow suit. Fun voice acting, clean sound effects and great variations on the tried and true Mario world themes make an appropriate package.

The core gameplay of Partners is extremely addictive. After your first time through, you'll come back to play the most simple of battles and the most complex:it's that good. I never once passed up even a miniscule skirmish to race through a level; I looked forward to each encounter. Partners in Time is the evolution the series needed, uses the hardware gloriously and delivers that rare Nintendo sense of fun that is enjoyable by all.

I will stand by ANYTHING you get to throw babies in.