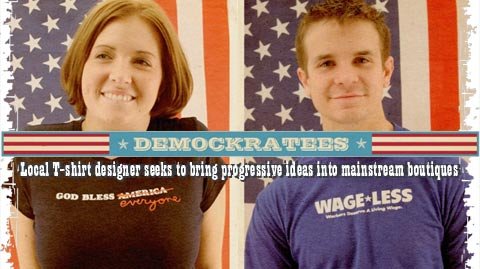 Ryan Red Corn wants to put his T-shirts on the backs of kids who work for a living, go to school, and hustle to make ends meet.

Unfortunately, many of those kids don't typically shell out $32 for a T-shirt - the price that national Urban Outfitters stores will likely soon be charging for a trial run of Red Corn's "Demockratees" T-shirts.

"I can't get the price down to where I want it in their store - there's just no way," says Red Corn, a local D.I.Y. designer who sells his shirts on demockratees.com for $16.

"My whole deal is to represent my working-class background. I'm the first one in my direct line to graduate from college ... My Grandpa was still roofing his own house when he was in his 70s."

The fact that a trendy boutique like Urban Outfitters is expressing interest in carrying a politically charged brand like Demockratees is a surprise even to Red Corn. When the store's main buyer contacted him, he called the company's main office just to make sure the guy was legit. 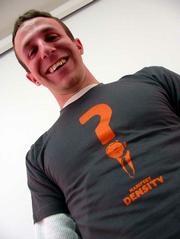 Now that Demockratees has a shot at a huge contract, Red Corn finds himself in an awkward yet enticing position.

"With that amount of capital coming in it would allow me to do so many other things to circumvent the establishment," says Red Corn, a 26-year-old DeSoto resident who grew up on an Osage Indian Reservation in Oklahoma.

Such self-sustained employment is what drew Red Corn into the T-shirt business. It's the reason he wakes up early, drags his sweatpants-covered legs to his computer and spends the next 10-15 hours creating, promoting and shipping his one-of-a-kind designs.

"The thought of going to work for somebody else doesn't really appeal to me," says Red Corn, who is also a trained carpenter. "I'm kind of stubborn that way - I don't like asking for help."

Red Corn's overriding design philosophy - "squeeze it down to its simplest form and it'll resonate" - is rooted in wisdom handed down from his Grandpa. Thanks to some artful maneuvering with closed-class openers, Red Corn - a self-described "C-student" - managed to sucker KU into giving him a design degree without ever being accepted into the program.

"I just kind of forced my way in there," he says. "It really laid the foundation for all of my T-shirt designs, because they really stress concept and typography."

Demockratees got its start two years ago when Red Corn printed up 36 T-shirts with George W. Bush accompanied by a question mark and the phrase "Manifest Density." He solicited 25 political T-shirt retailers and heard back from only one. That guy - a Spain-based buyer for an online store called "Ban T-shirts" - bought 20 shirts.

In two short years of business, Red Corn has churned out 25 designs and developed a bustling online store at Demockratees.com. The brand's "cool" factor hinges on its ability to convey intelligence in the face of a market that's already flooded with activist-oriented T-shirts.

Who: Candi Best, 30 What: Shirts for redheads Why: "I think we're fascinated by each other. I didn't go to school with another redhead until middle school." Where: www.realmofredheads.com Popular designs: "Redheads Do It Better," "Got Melanocortin?," "It's a redhead thing ... you wouldn't understand."

Who: Josh Millstein, 28, and Brett Stoppel, 29 What: Shirts, hats and discs for fans of Ultimate Frisbee and other outdoor sports Why: To promote fringe sports and lifestyles that aren't represented by corporate apparel. And to pay off their parking tickets. Where: 803 1/2 Mass. St. (just go up the stairs) or www.habitualviolator.com Popular designs: "Release the Donkey," "Clee Trimb," "Fork You"

Who: Sean Ingram, 30, Burton Parker, 27, and many more What: Shirts and other apparel for bands, artists and local businesses Why: "First and foremost music is our business and we built this company to serve musicians" (Ingram) Where: Buy stuff at www.bluecollardistro.com or visit 1100 E. 11th (east of Haskell St.) to place orders. Popular clients: The Cardigans, Motion City Soundtrack, Reggie and the Full Effect, Lucero, Koufax, The Golden Republic

"Most of them are just really obvious, like ... 'Bush is Dumb' or 'No Blood for Oil,'" Red Corn says. "Most of the concepts I have on my shirts are kind of a slow burn. It's something you kind of have to stare at ... at least that's what I hope."

Often mistaken for a "liberal," Red Corn more accurately describes himself as a "Dust-Bowl Democrat." His T-shirts are egalitarian, stressing respect for diverse populations and ideas. One popular design rephrases "God Bless America" as "God Bless Everyone," while another pictures Mt. Rushmore with the phrase "Vandalism."

"The Black Hills are sacred to the Lakota people, and putting the faces of America's founding fathers on them is in many ways disrespectful," Red Corn explains. "Each one of those individuals is responsible for absolutely horrible acts against Native people."

Red Corn's Osage heritage also informs designs that attach the word "Hero" to a portrait of Sitting Bull and the phrase "Retire Indian Mascots" to The Cleveland Indians baseball logo.

This January, Red Corn will begin working on a graduate degree in Tribal Language Revitalization. When he finishes, he plans to return to his reservation and develop textbooks and a recording studio to help preserve the Osage language.

"The subtle things about our Tribe really make sense if you know the language," he says. "It provides so much insight into the way our world is conceptualized. It's not like learning French or something."

If Red Corn's shirts catch on with Urban Outfitters, he'll have plenty of money to finance such an endeavor. The store's national buyer has already purchased 80 shirts apiece of three different designs to do a trail run in 10 stores picked at random. If those shirts fly off the shelves, the next order could be for 2,500 shirts. 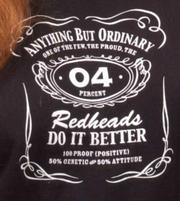 "I hope to God they pick blue states," Red Corn jokes. "I'm not under any false pretenses - my stuff is eventually going to get pushed out of that store. While it's in there, I can do lots of good things with it. If they order 2,000 shirts a month for the rest of the year, I'll be sitting in hog heaven."

Red Corn won't be the only one riding high if Demockratees takes flight.

Since his company's inception, Red Corn has employed Blue Collar Press to print his shirts. The screen-printing company - which recently moved to Lawrence after half-a-decade in Eudora - now employs 15 people and has grown large enough to handle massive orders from the likes of Motion City Soundtrack, The Cardigans and Reggie and the Full Effect.

According to Burton Parker, manager of BCP's online store Blue Collar Distro, the company has recently been doing an increased amount of business outside of the music realm.

"We have a lot more arty people coming to us just making their own small fashion lines," Parker says. "People just want a cool shirt. It doesn't even have to say anything."

Parker partly attributes this trend to the rise of Threadless.com, a site that allows people to vote on submitted T-shirt designs. The most popular designs are then printed and sold at below-market prices.

"I didn't realize how huge Threadless was, but it's just putting this whole huge emphasis on the T-shirt again," Parker says, adding that BCP has also recently printed a line of T-shirts for KC design collective MK12.

Red Corn also stands to benefit from the advice and connections of BCP production manager James David, who launched his own T-shirt company called Breakdance America a couple years ago. That company managed to wrangle its T-shirts into a number of stateside and international boutiques, but lacked the kind of major contract that would justify a full-time investment. 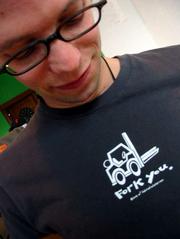 "I was relieved, because it was getting to be so much work and not a lot of payoff," says David, who played bass for former Lawrence bands The Anniversary and The Only Children. "I'd work during the day and come home and pack orders all night ... It was the same thing over-and-over again."

Breakdance America used innovative packaging and guerilla marketing techniques to build street-cred. David and his partner Kevin Kusatsu sent out free goodies to magazine editors in hopes of getting articles (it worked) and designed goofy knick-knicks to hand out on the street.

"The concept behind it was basically all in the packaging," David says. "I was hoping it would get picked up some mainstream boutique and I would be able to hire people to do what I was doing and sit back and watch it grow from there."

Though he's out of the custom T-shirt business for the time being, David says plenty of opportunity exists for motivated T-shirt designers.

"Stores weren't always so willing to buy a little one-off T-shirt as they are nowadays," he says. "I think that's the appeal of a lot of these limited-run companies - you're not going to see the shirt on other people."

Way to go Ryan! - Desiree' and Ethan from the Third Planet