King of the Xbox 360 jungle

Bad: Jack Black doesn't quite look like Jack Black, a bit on the short side

Does it feel "next-gen": Yes

Peter Jackson's remake of King Kong might not be out in theatres yet, but gamers who are anticipating the film can get a taste of what's to come with this game. Peter Jackson himself enlisted developer Michel Ancel, who previously created both the Rayman franchise and the often-overlooked Beyond Good & Evil, one of the best games of the past three years. The collaboration between these two great visionaries yields a great game.

During most of the game, you play as screenwriter Jack Driscoll (played by Adrien Brody in the movie) from first-person perspective. Further immersing you in the game is the lack of HUD (heads-up display). This allows you to really see the world just as Jack does, and it cuts down on the clutter that is up on-screen while you're playing. But you cannot see at a glance, for example, how much ammo you have (you have to press the "B" button to get Jack to say out loud how much remains). 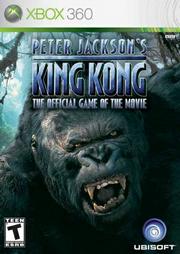 As Jack, you'll find yourself fighting all manner of different creepy-crawlies and some bigger baddies as well - all with a scarcity of ammo for weapons. Yes, you will find some shotguns, rifles, and pistols along the way - which is worked into the story in a plausible way, instead of ammo crates just randomly popping up in places where no one has ever been before.

The lack of ammo really makes you think while you are playing as Jack, as you quickly realize just how low you actually are on the food chain on Skull Island. I don't want to ruin too much of the game or the movie, so I'll just say that the V-Rexes are truly a sight to behold, as long as you're not being chased by one (or two).

Instead of just unleashing a fury of bullets, you really are forced to use your brain to get out of many situations. For instance, you can bait the bigger creatures on the island by killing the smaller ones, thus the bigger baddies will go after the easier meal (the dead one) giving you a few moments of respite to collect your thoughts or achieve your objective at the moment before they finish their meal and go looking for more. Or if you're lucky enough to find some fire, you can light a spear with it and chuck it at some of the brush and light up an entire field.

Sometimes you will get a chance to play as the King of Skull Island himself, Kong. When you play as the great ape, the game switches to a third-person perspective with fixed cameras a la Devil May Cry. The sheer force that Kong commands is immediately noticeable when you start fighting baddies. You'll easily knock down enemies with one swipe that it took Jack entire clips of ammo to down, and you'll be able to go toe-to-toe with V-Rexes in some very satisfying fights.

The gameplay in King Kong always stays fresh, thanks to the myriad of situations in the game, well-paced action, along with a little bit of puzzle-solving and story. There are a few bugs here and there, including one that I ran into causing me to delete my saved game and start over entirely - when I was over halfway through the game, no less.

With the power of the Xbox 360, you'll drool over the visuals. The bloom lighting and HDR (High-Dynamic Range) lighting really makes looking into the sun hurt your eyes, and creates some cool scenes when you're walking through a cave and light beams make it through into the cave. One of the biggest surprises to me was just how good Kong himself looked. His hair is so fine on the 360 version that it really looks like a gorilla, and not a gorilla in a videogame.

The audio is great, too. Michel Ancel was able to get all of the actors and actresses from the movie to do their own voices, so Jack Black voices Carl Denham, Adrien Brody voices Jack, etc. Not only do the actual actors add credibility to the game, but they also make the story more integrated to the game.

You can definitely add this game to the small list of great movies-turned-games. Despite being a quick play start-to-finish, players will definitely have a fun romp through Skull Island.