Has Rare returned to its throne?

Does it feel "next-gen": Not quite

In recent years game development has started to take longer and become more expensive. However, few games can boast a development history like Kameo's; it has been scheduled for release on three different consoles. Kameo was originally slated to be a premier title for the Nintendo Gamecube, however, when Microsoft purchased Rare in 2002 the title became an Xbox exclusive. Yet, again a change was made and Kameo was pushed back to be a launch title for the Xbox 360. Ideally after all this time the game would be flawless, but unfortunately that isn't the case. 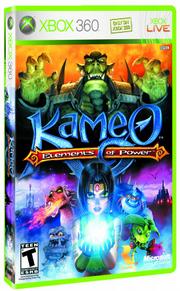 The game focuses on the adventures of Kameo, an elf princess who is tasked with saving her family from imprisonment. To do this though she must also rescue ten different elemental sprites that will give her the power to transform into ten different elemental warriors. The story is fairly short, straight forward, and slightly dull to be honest. There is not much of the charming magic that really would make the story endearing to an audience. However, it will be enough to keep you playing through the roughly nine hours of it. The saddest part of the story though is that of the ten warriors obtained; only about five are useful. There is a little replay value added to the game in the many pieces of unlockable content, a co-op mode, and the ability to replay all the levels to get better scores.

Kameo does truly shine in the graphical department though. This game has some of the best normal maps ever seen. There are many different textures that almost seem impossibly detailed. Many of the most impressive textures appear on the pathways and ice in the game. Also quite awesome is the draw distance that is displayed. It is possible to see from one end of the Badlands, the central area of the game much like the Hyrule plain in Zelda 64, to the other with an impressive use of the depth-of-field effect.

Also impressive is the lighting that is displayed on many of the levels. The game features a day and night cycle which produces some interesting lighting effects from torches and from the glare of the sun on the water. However, with all the gorgeous textures in the game, there are also many lower quality textures that are repeated and become glaringly obvious in some places. On top of that the enemy diversity is quite narrow which leads to many repetitive looking battles. Though the games boasts hundreds of enemies on screen, there is not anything impressive about it being the same character repeated over and over displaying only three different actions.

Also rather disappointing are the different cut scenes that seem to have been ripped straight out of the Gamecube because of their low quality textures and visual presentation. These scenes may have been trying to present a stylized format, but rather come off as last second efforts.

The audio for the game does seemed to have benefited from the long years in production because most of it is high quality. The soundtrack is remarkably fitting to all the different locales in the game and is generally pleasant to listen to. Also the different sounds the warriors, enemies, and other characters make are humorous and well done. This is probably the best aspect of the game.

The most puzzling aspect of the game however is the control scheme. It is bizarre to a point of frustration. First, the camera is placed too close to the main character and can become hard to handle in close quarters, when there is tall grass, or your character is facing in the opposite direction. This would not have been so bad if there had been an auto-center button, but there is not and the camera suffers because of it. On top of that, many of the warrior forms will auto-lock on a target without any input from the user and the camera will become tethered to this enemy, even after he is disposed of. This becomes a huge issue when using Pummel Weed in warrior focus mode because the player has no manual control over who he attacks, only when he throws punches.

Often I ran out of warrior focus because I could not stop aiming at a dead enemy that was flying through the air. Second, the choice of control setups for the different warriors almost seems arbitrary. For example, there are four warriors that have the ability to manually aim projectiles, but only half of those warriors can move while aiming. This may not have been so bad if the two that could not move would not take aiming commands from the movement stick, which is the left analog stick by default. This setup often causes confusion and just begs the question of why it was divided this way.

Yet, the biggest control complaint is that of the swimming mechanism for Deep Blue. This has to be the worst possible way to control a character underwater. Thankfully those miserable sections are short and do not occur often. Yet, for all these mistakes the rest of the game controls decently Kameo is fluid, most of the warriors and their skills make sense though a few seem to be repetitive, and the horse is a breeze. Too bad these accomplishments were marred by the previously mentioned grievances.

The release of the Xbox 360 saw a couple superior titles, a decent number of average titles and a few real stinkers. After so many years in development Kameo should have been in the top tier of launch titles. Although it is a better-than-average title, it falls short due to issues that could have been ironed out.