Could this be...the one?

Good: Cool moves and abilities, recreated scenes from the movies

I remember the first time I ever heard of The Matrix. I was sitting at a bar with my father, watching the Super Bowl back in 1999. With just a short trailer, I could tell that this movie was going to be an event. Catching a glimpse of Neo dodging those bullets and fighting Agent Smith was absolutely amazing. Like just about every guy back then, I walked out of the movie theater feeling like a little kid. It was filled with a creative plot, menacing villains, and (most importantly) some eye-popping action and special effects that are still being emulated today. Honestly, how many times have we seen "bullet-time" since The Matrix was released?

Unfortunately, ever since the release of that excellent first film, anything with the Matrix name has been the definition of a disappointment. Reloaded and Revolutions were both convoluted and pretentious films, and the Enter the Matrix game was widely panned. As should have been expected, The Matrix: Path of Neo follows suit by having a lot of potential and pretty much squandering it. 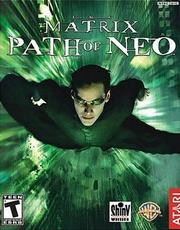 It follows the same basic plot as the movie trilogy, but still makes several deviations (I don't remember any giant karate ants in the movies). You'll start by learning some of Neo's early moves, then go on to the events from the original film. The dramatic lobby and rooftop shootouts, the subway fight with Smith, stopping the bullets in the hallway it's all there. Path of Neo may do several things better than Enter the Matrix, but the recreation of these classic scenes is one of the best.

The 100-Smith fight is included, as well as the crazy Dragonball Z-esque fight from Revolutions and a new ending that's heavily featured (and spoiled) in the commercials. Somewhere near the beginning of the Reloaded levels, the missions shift to a mediocre search-and-rescue formula, and it really drags down the pacing. The story throughout the entire Reloaded and Revolutions section is just as terrible as the movie versions, but the game makes it even more confusing by re-cutting movie clips between missions. Honestly, if you have never seen the films, you would have no idea what's going on in this game. There isn't even a coherent cutscene that explains what the "matrix" itself is.

The combat system in PoN is certainly ambitious, but it has plenty of flaws. Between levels, you can choose which moves to upgrade Neo with. A lot of these moves look very impressive and fit with the style of the film. As your arsenal grows, it becomes easy to accidentally pull off moves you didn't intend to. I can't count how many times I wanted to do a huge uppercut combo, but Neo disarmed the enemy instead. Some of the later moves rarely come up in a fight, just because the requirements to perform them are so specific. All moves can be made more powerful or modified by holding the L trigger to go into Focus mode. This is basically the "bullet-time" button, and it slows down the action and allows you to hit harder, dodge bullets, and jump insanely far. As you progress through the game, your Focus bar will increase.

Controlling the action can be annoying, as simple tasks such as jumping and targeting are chores. Gunplay in general is absolutely terrible, and involves flicking the right analog stick to lock onto enemies. This lock-on system is awful, and there were plenty of times that I wanted to lock onto a SWAT member, but ended up getting caught on a rafter or door (or a random section of the sky). Difficult portions of the game usually aren't that way intentionally, they're difficult because of a glitch or control issue that causes you to fall to your death or make some other mistake. Certain objectives are horribly annoying, such as trying to knock Agent Smith in front of the subway train.

Graphics are a prime offender, with most animations looking awkward and glitchy. Neo will often make dramatic shifts in pose and aim his guns even if nothing is going on. The ragdoll physics engine will sometimes cause dead bodies to freak out and jump all over the place. The camera is absolutely awful, to the point of possibly being one of the worst 3D action cameras this generation. It will glitch out and spin around until you can't see anything, it will point the complete opposite direction that you want it to, and it will (in essence) become your worst enemy throughout the game. While some graphical elements are nice (the breakable environments, "Code Vision"), they're hardly enough to pull PoN out of its visual dungeon. Sound effects are horribly dull, and music will fade in and out at seemingly random intervals. The game features the actual actors from the film, and Keanu Reeves sounds like he honestly couldn't care less. Granted, he wasn't exactly Brando in the movies, but it was at least believable.

I know there are a few hardcore Matrix fans out there that convinced themselves that Reloaded and Revolutions were good movies. Those people will probably enjoy this game, just because it's pretty faithful to the movies. The combat system is decent, and there's a lot to do with it, but the awful controls and camera killed most of the enjoyment for me. If you're not a fan of the last two Matrix movies, you'd be better off just taking the blue pill at the beginning of the game.