For months on end, gamers have waited with bated breath for the next entry in this majestic series. I'm sure every one of us remembers where we were when we first watched the breathtaking E3 trailer back in May. Zelda, Xbox 360, the Revolution, the PS3 all just backdrops to this monumental juggernaut of interactive entertainment. What new plot twists were to be had? Would the gameplay shock and astound the industry yet again? How many polygons would be included in Paul Sr.'s mustache?

Sarcasm aside, it should come as a surprise to no one that American Chopper 2: Full Throttle is not a good game. The sequel to the widely panned original, AC2 offers absolutely nothing in terms of innovation, creativity, or fun. It's playable, sure, but that doesn't save it from being a yawn-inducing piece of licensed mediocrity. Unfortunate gamers can choose between the four personalities on the show, each of which has their own specific missions and bike to build.

Each mission features some odd and uninspired objective, such as "Find Paul and race him!". Most of them are of the race variety, and these are set up with a similar checkpoint system as the one in Midnight Club 3 (beacons of light will show you which way to go). Some missions don't even make that much sense, such as when a biker steals a bunch of tools from a tattoo artist. Paul Sr. wants the tattoo artist's services, so he tries to hunt down the biker. Upon catching up with him, the biker agrees to give back the tools if Paul Sr. beats him in a lap race. What? 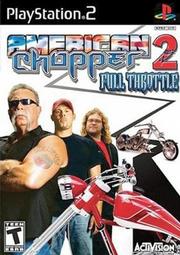 The controls are absolutely awful, even with upgraded bikes. They control like they're driving over an all-encompassing invisible layer of ice. Turns are difficult to accomplish, even with the use of the multiple braking methods. Get used to flying off the course and running into a tree, because it's guaranteed to happen a whole lot. These bikes can also do "chopper slides" to drive under semi-trucks, although this ability is rarely used.

Each of these missions can be completed with a bronze, silver, or gold medal. Style points are awarded throughout the race, and these turn into "fabrication points" at the end. These fabrication points can also be picked up on the road, and can be used to upgrade different aspects of your bike. Cosmetic changes can also be made, so feel free to build whatever kind of bike you'd like. There's a good chance you'll find this more interesting than the actual gameplay.

Graphics are muddy, textures are boring, particle effects are terrible, and this game wouldn't even look particularly impressive on the PSX. It attempts a Burnout-style motion blur effect, but this just makes the game look even muddier. There's also way too much onscreen text, particularly when you do something "stylish" like narrowly avoid a car. I don't need to see the words "SMASH" or "WRECKING BALL" every time I run over a chair or pylon. The music is the definition of generic, and the voice acting makes it painfully clear that these mechanics are certainly not competent actors by any means (even if they're playing themselves). The dialogue is read as if they were reading the nutrition facts off a cereal box. There are several between-mission vignettes, but nothing interesting of any sort. Just a lot of "Mah dad is a real hard-workin' guy. He worked in the steel business for 30 years." It's as thrilling as it sounds.

I recommend this game to no one, regardless of your interests, knowledge of the show, or whether or not you've ever enjoyed a racing game. At no point does American Chopper 2: Full Throttle resemble anything remotely close to "fun." Under no circumstances should you ever play this game.