Does the final edition redeem the series?

Two Thrones is the last chapter in the Prince of Persia resurrection. The first one dazzled audiences with its versatile platforming, beautiful environments and tight, responsive controls. The second chapter featured a more menacing Prince, one that was highly criticized as unlikeable and overly macho. This last adventure combines both those themes as you'll experience the high-flying side of the 'light' Prince and the merciless wreckage done by the 'dark' Prince. Two Thrones adds just enough to keep the series fresh and yet it builds upon the fundamental gameplay that has long made Prince of Persia a highly-touted title.

The game leads off with some fancy looking CG cutscenes that show how the Prince's Kingdom of Babylon, upon his return, is in shambles and being overrun by invading soldiers. To go along with the wreckage of his city, Kaileena, his new lover, is kidnapped during all the chaos and he sets out to find her. This is where you begin control of the Prince and controlling him is crisp as ever. Ubisoft really got the momentum and bodily movements of the Prince perfectly. What plays a huge factor in the tight controls is how the animations are streamed together seamlessly. If you are familiar with some of the Prince's movement from the previous titles, you'll notice right away that running up walls, executing attack combos, jumping from pole to pole and many other aerobatic stunts are smooth and have no awkward hiccups in movement. 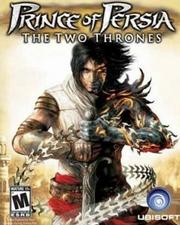 It seems that Ubisoft knows how great their game controls so the entire first area of Two Thrones is the Prince running and jumping on every possible surface within the city showing off the amazing moves of the 'light' Prince. It's a wonderful setup because hardcore junkies of the series will appreciate getting familiar with the controls again and those that are new to the series get a great tutorial. As you progress further along, you'll get access to the 'dark' Prince. Of course both the 'light' and 'dark' Prince are the same person, but this is part of his split personality developed from the game before. Each has unique strengths, the light being weaker but easier to move and the dark being strong and a bit more difficult to get around. It definitely adds variety to different situations and it's a nice way to end the trilogy with a mix of the first and second chapters.

Probably the most significant addition to the gameplay, Speed Kills allow the Prince to go into a preset animation where you can instantly kill an enemy if you time your button punching correctly. The reason why this is so significant is because the platforming is about getting a Speed Kill on every enemy in the way. So in a sense, each room or area is a gigantic play pen where you'll have to figure out how to move around the room in order to get a speed kill on each enemy. If you take a wrong step, cause a loud noise, or get in view of one of the enemies, speed kills will not be useable. You'll have to sneak up on every enemy in order to pull it off. This aspect of the gameplay is what separates the Two Thrones from the other Prince of Persia's. Now each room is a logic puzzle that you have to solve. Climbing up that pole may not be such a smart idea since a guard patrols right by it. How about instead you run up the wall to your left, climb up on the ledge and leap across to the wooden bar where you'll hang down and surprise the guard with a Speed Kill? That's how you'll have to think to get through The Two Thrones and it's extremely rewarding when you pull off the perfect plan.

There is one fault with this new stealth gameplay. The game does become a trial and error game where you won't care about dying anymore. Much like the Metal Gear Solid series, the objective is to get through the areas without fighting and when you goof up it's very easy and very forgiving to give up and die. This way you can start fresh and get another chance at your strategy. You do feel a bit cheap at times but it's nothing you'll be stressing about.

Two Thrones is absolutely gorgeous looking. The lighting effects perfectly portray shadows and beams of moonlight coming through cracks and windows. Ubisoft went to great lengths to make sure that everything was polished from the sand textures of the ancient city to the light reflecting off the Prince's blade. As mentioned earlier, the animations only strengthen the visuals. The framerate stays at a solid 30 frames per second and rarely drops off. Another plus is how the music and sounds of the game have reverted back to the old style. Warriors Within went on a strange frenzy of unbearable hard rock. You've been spared of this style for a much better Middle Eastern theme which suits the game much better. Throughout most of your journey you won't even have to deal with the music as it will be off to aid in the sneaking around that is required. The only sounds you'll be hearing are your light footsteps on the marble floor and the grunts of the guards nearby. Any sound you cause will alert enemies so beware of plates and other breakable objects because when they break, they break loud.

Prince of Persia is a highly entertaining trilogy and ends on a great note with The Two Thrones. You can tell Ubisoft wanted a fusion between Sands of Time and Warriors Within and this is exactly what they got. The boss battles are innovative and the new addition of Speed Kills keeps the platforming action continuous. Kudos Ubisoft, you have done us well.