What do Bill Clinton, Quentin Tarantino, Phil Ramone, Triumph the Insult Comic Dog and Janet Jackson have in common?

They're all nominated for 2005 Grammy Awards.

Those five may seem a particularly oddball collective, but that all-encompassing aspect pretty much defines the Grammys. This is both the 47th annual event's strengths and one of its greatest weaknesses.

Each year, The Recording Academy that administers the awards unleashes a staggering, invasive amount of categories -- 104 of them to be exact. The willingness to dole out so many trophies is one of the reasons why a Grammy has never provided the same cachet as an Oscar or a Pulitzer.

Everybody wins at the Grammys. Or at least everybody is allowed to play.

This concept works well at the actual awards show, where the spirit of inclusion makes for intriguing bedfellows. At this year's ceremonies, Tim McGraw will join the surviving members of Lynyrd Skynyrd for a salute to Southern rock; Rapper Kanye West is slated to share the stage with gospel legend Mavis Staples; and The Beatles' "Across the Universe" will be interpreted by artists ranging from Stevie Wonder to Brian Wilson to Velvet Revolver.

Alicia Keys is nominated for Song of the Year at the 2005 Grammys with "If I Ain't Got You."

While these collaborations have the potential for becoming a musical train wreck, more often than not they're the most memorable performances of the night. They're certainly better than watching Tim McGraw play a Tim McGraw song.

Most importantly, nobody lip-synchs at the Grammys, which is one of the reasons you're far more likely to see Alicia Keys sing than that cartoon character with the last name of Simpson. (No, not Homer ... Ashlee.)

Yet the Grammys could still use some retooling. Here are a few suggestions for how to give the contest more credibility and keep the show fresh:

Major awards shows keep nominees to a minimum. The Oscars (24 categories) do a pretty good job of it, as do the Emmys (27). Couldn't tell you about the Tonys. But the Grammys have more unrecognizable filler than a McRib. Just look at the night's top two awards: Record of the Year and Album of the Year. Those are the same thing, right? (The Oscars don't have Best Picture and Best Movie categories.)

One of those two can be the first extraneous piece purged.

Also, there are already six Latin categories in the Grammys. Yet there is an entire other entity called the Latin Grammys. Since the regular Grammys don't seem to be good enough to appease that separatist organization, this presents another half dozen categories that can be removed and handled by its cousin. 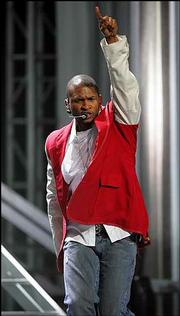 Usher is nominated for Record of the Year at this year's Grammys for "Yeah!"

Then it's time to start chopping. I suggest these very real and very arcane categories should be the first to go: Best Polka Album, Best Hawaiian Music Album, Best Historical Album and Best Surround Sound Album.

The Grammys don't honor albums that came out last year; they honor albums that got "popular" last year. So if the fifth single from an artist's 2001 record hits the charts, it's eligible. That's like giving an Oscar to an old movie because it found an audience on DVD. Thus, stale efforts from artists such as Evanescence and Hoobastank and songs from the soundtrack to "Cold Mountain" remain in contention. Old news. Time for the Grammys to only hail work released during the calendar year.

Ray Charles was nominated posthumously for nine Grammys, including Record and Album of the Year laurels. Sure, everybody loves Ray, but he put out three acclaimed albums since his last Grammy win in 1993, and nobody noticed -- until he died. He now boasts more nominations than "Ray" has at the Oscars.

But the Grammys' fascination with the non-living goes beyond Charles. Just look at Best Pop Collaboration With Vocals. Three of the five categories feature a deceased artist, and "Redemption Song" is a duet between Johnny Cash and Joe Strummer who are BOTH dead.

I don't want to come across as callous, but it's always a better idea to grace someone with an award on a case-by-case basis of craftsmanship than to lazily eulogize them. This applies even more to the live broadcast. Nominated dead people can only become involved through montages or tributes, which generally turn weepy. 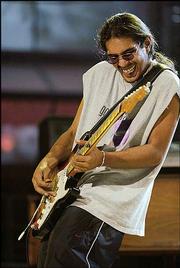 The latest news is that Los Lonely Boys, The Black Eyed Peas, Maroon5 and Gwen Stefani will all be part of a collaborative show opener. Yet these mix-and-match performances could be spiced up even more if The Recording Academy took full advantage of its outrageous range of participants.

How about having Best Spoken Word Album nominee Bill Clinton and producer Phil Ramone (Album of the Year) have a verbal duet discussing strategies for lying to a jury?

Clean up your act

Any organization that honors the "artistic merits" of multiplatinum atrocities such as Britney Spears and Nickelback needs to be overhauled -- or at least poked fun at.