My mistress' eyes are like the stars plucked from heaven.

And her lips, coral-stained, do invite thee closer.

The Lawrence poets performing on Valentine's Day at the Bourgeois Pig want nothing to do with this chivalric sap.

Francesco Petrarca, William Shakespeare and Elizabeth Barrett Browning may have done it well, but most poets these days are better off taking a less idealized look at love.

"The problem with cheesy love poems is they're just full of cliches, and that's why people can't see the emotion," says Ed Tato, one of six poets scheduled to perform at Monday's reading, titled "Hearts of Darkness." "They say, 'Oh I get it. The dreamy eyes. I know what that means.' But it never actually makes you feel that emotion.

"Usually my love poems include the element of yeah, there's a love there, but there's also the idea of impermanence, whether it's impermanence because it won't last as a relationship or that there's death somewhere lurking in the background." 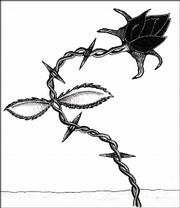 Although Tato and his fellow bards' outlook on relationships is realistic -- perhaps even cynical in the context of Valentine's Day -- any bitterness that might seep into their work pales in comparison to that unleashed by their ancient counterparts.

There's a history longer than one might imagine of poetry that rails against the sanctity of love. Gaius Catullus curses his beloved Lesbia as much as he adored her back in first-century Rome.

"Catullus' stuff is pretty rough," says Michael L. Johnson, a Kansas University English professor. "What he says to Lesbia is horrible. He says, 'May your hair fall out. May your teeth fall out. May your eyes rot.' He's just vicious.

But, really, it should come as no surprise that love poetry has flourished alongside what might be referred to as anti-love poetry for centuries.

Hearts of Darkness: performances and poetry for Valentines

"Real hatred tends to come out of relationships that are the closest sometimes," Johnson says. "If you don't know somebody, it's hard to really hate them. But if they've betrayed you after 20 years, you can get pretty hot."

This idea is evident in celebrated modern poetry as well. Take Sylvia Plath's virulent "Daddy." Plath metaphorically murders her father's memory, making him a Nazi and herself a Jew. She even makes a reference to her seven-year marriage to poet Ted Hughes, calling him a "vampire" who "drank my blood."

But Tato and others reading at "Hearts of Darkness" agree that too much hate can be as tiresome in poetry as too much love. There are few things worse, Tato says, than a spurned lover whining to an audience about how much he's suffering because of the woman who betrayed him and how miserable he hopes she is without him.

"My response generally -- unless it's done really well -- is get over it," Tato says. "Listen to your poetry: You deserve it."

Wayne Propst, another poet performing at Monday's reading, prefers pointed honesty over fawning or whining. He writes the kind of love notes you might find taped to the door of a double-wide, and he reads them with an ornery, gravely drawl:

Some of his other poems venture into the profane and focus on less-than-traditional relationships, to say the least.

"I don't think this performance is for people who think the earth is 6,000 years old. They better stay home," Propst says. "This is for a roomful of adults, and anyone who worries about that kind of stuff is probably going to freak out a little bit."

The poet doth expect too much

When most people try, "It comes out sounding like a rock song," she says, laughing.

So Ruhlen -- when she broaches the subject of love at all -- approaches it with whimsy, as in her poem "Phlegm," one in a quartet of works about the Medieval humors:

"My heart is a warthog

Rooting for grubs in the forest of my ribs,

In the morning it grunts at the sun

Ascending the ladder of heaven

And snarfles beneath my lung

For a bit of leather breakfast ..."

"It sort of is an anti-love poem on a certain level," Ruhlen says. "If your phlegmatic, it means that you're very calm, you have a lot of equanimity in the face of whatever's going on. So what if a very phlegmatic person is in love? What does that mean to them?

"Instead of comparing their heart to a burning fire or a big diamond or something, they're going to compare it to a warthog."

But make no mistake: Contemporary poets aren't the only ones to recognize the silliness inherent in some of the poetry that sprung from the courtly love tradition of the Middle Ages, which involved the idealization of woman and the chivalric qualities of man.

"There's plenty of poetry at one time or another that deflates that, says it's unrealistic, says we can't expect people to be like this, live like this, love like this," Johnson says. "These are idealizations that ask too much."

Even flowery speaking fellas like Shakespeare were hip to the fact that love poems could spill overboard in gushy flourishes.

He famously pokes fun at the conventions of exaggerated love poetry in Sonnet 130, which handles with expert delicacy the very task Tato and his colleagues intend to tackle on Valentine's Day:

Coral is far more red than her lips' red;

If snow be white, why then her breasts are dun;

If hairs be wires, black wires grow on her head.

I have seen roses damask'd, red and white,

But no such roses see I in her cheeks;

And in some perfumes is there more delight

Than in the breath that from my mistress reeks.

I love to hear her speak, yet well I know

I grant I never saw a goddess go;

My mistress, when she walks, treads on the ground.

And yet, by heaven, I think my love as rare

As any she belied with false compare."