Marvel Comics games have seen a variety of treatments over the years. You never know how good or bad one will be. Luckily for the Punisher series, Volition does an admirable job bringing the nature of the book to an otherwise rudimentary shooter.

The Punisher is a light-hearted tale of Frank Castle, who, after his family is murdered, turns into a justice-seeking, bloodthirsty hero. He stops at nothing to deliver the most pain and suffering to evil-doers across the land. This is the element where the game gets most of its identity. While you can point and shoot, the game's design entices you to use over 100 interactive environments to bring your enemies to their demise.

To gain information from enemies, you can interrogate them, threatening their lives little by little, more and more until you get what you need to hear using chokes, face smashing, punches, and Gun Tension (a Russian Roulette option). Then it is your choice to finish them off, use them as a human shield or in some cases let them help and guide you to mission objectives. The game is easy enough as it is, so letting enemies help you isn't really necessary, which is a bummer. 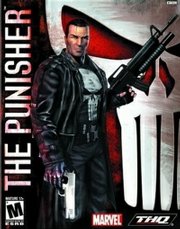 The peak of excitement, however, comes from environmental "hotspots" where you can use the objects around you for specific interactive kills. Hanging knives, laser machines, wall hangings, car doors and a creative myriad of other environmental factors can be used in creative ways. Like Manhunt for PS2, the most gruesome kills are filtered in a snuff-ish black-and-white camera mode at the encouragement of the ESRB board. It's pretty silly because, unlike Manhunt, you can't take the Punisher seriously. It's an obvious over-the-top comic book adaptation and doesn't mimic real life in the slightest. Still, these interactive kills are pretty fun in a Mortal Kombat Fatality sort of visceral fashion. And to think there are more than 100 of these sprinkled throughout the game. Most of them are pretty creative.

There are boss battles that really bore with their standard routines and uninspired belonging. The game would've been better without the focus. Include the characters for the comic's authenticity, sure.

Of course, the rest of the game hands you an arsenal of several automatic weapons, shotguns, a sniper rifle and more that can be shoved into the standard shooter category. Fortunately, you won't go for very long without encountering hotspots or interrogation opportunities to get you out of the standard play. Volition keeps these scenarios interesting right up until the very end. But once you've seen all the animations for the environment kills, the replay value wanes, much like the entertainment value of a good joke. Regardless, the once-through is quite a blast.

The graphics range from brilliant character models and objects to blurry textures and substandard level design. It's a weird combination to be sure. The score is admirable, but takes a backseat to the crisp sound design and wonderful voice acting.

The Punisher is a great renter. It's a thrilling romp that you will be glad you played, but not sure why you'd want to spend the extra $45 to have it collect dust on the shelf for the rest of its days.