Brentano String Quartet's program a feast for the ears

The Brentano String Quartet, an outstanding young ensemble which has appeared in New York, London, Salzburg and Rome, took the Lied Center stage Sunday afternoon. The program of Mozart, Webern and Beethoven was welcomed by the audience and was sensitively performed by this accomplished group.

The afternoon's musical feast began with dessert and ended with the main course, with a piquant savory dish in between. Mozart's String Quartet in A Major, K. 464, was certainly a rich and complex dessert, played with fine attention to nuance. The four members were beautifully attuned to one another, their entrances and mutual dynamics so perfect that at times it was hard to believe there were four instruments rather than one with four voices.

Throughout the Mozart quartet, the group's exceptional clarity of tone was evident, led by Mark Steinberg's violin, delicate and then powerful as the score required. And though all four members blended exceptionally well, one hoped for passages featuring the superb duets of Steinberg and fellow-violinist Serena Canin.

The group's playing was accompanied by considerable body English: dips, leans, bows, bendings and head-tossings, which reflected the musicians' emotional connection with the music but was somewhat distracting to some in the audience. It was most marked during the Mozart but virtually disappeared in the more imposing Beethoven. 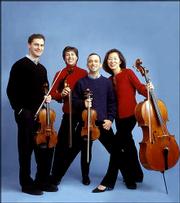 The "savory dish" was Anton von Webern's String Quartet, Op. 28. Lied Center audience members are sometimes merely patient during atonal numbers, but the Webern quartet held their interest throughout its relatively brief duration. Steinberg introduced the number from the stage, explaining its background in post-World War I disillusionment, the rise of psychoanalysis and the psychological realism of Strindberg. Near the end of the final movement, the Lied's sound system produced a sudden unfortunate whoop, and the performers' expressions as they took their first bow ranged from ironic to grim.

The musicians were appropriately focused on the entire program, but clearly they came to play Beethoven's String Quartet in A Minor, Op. 132. Its opening movement, at first somber, then by turns passionate, lyrical and melancholy, proceeded flawlessly. The second movement, linked by Steinberg's excellent program notes with the Mozart second movement, afforded an especially good opportunity to appreciate the excellence of Nina Maria Lee's cello and Misha Amory's viola. Amory, by the way, also provided exceptional program notes on the Mozart quartet.

The afternoon's piÃce de resistance was the magnificent Molto adagio-Andante movement, called by Beethoven a "song of thanksgiving to God from a convalescent, in the Lydian mode." Beginning in great solemnity, the movement alternates three hymn-like sections with two joyous sections which Beethoven indicated as "feeling new strength." The four musicians played reverentially, and at times the music seemed to fill the entire space of the Lied.

The afternoon ended with the fourth movement, beginning as a march but changing time signatures en route. The enthusiastic audience would have been glad of an encore but could understand that, after two hours of intense effort, the Brentano quartet was ready for a rest.

Dean Bevan is professor emeritus of English at Baker University. He can be reached at <a href="mailto:bevan@ku.edu">bevan@ku.edu</a>.