Like the Wario Ware incarnations before it on Game Boy Advance and Gamecube, Wario Ware: Touched! offers a completely different angle in gaming. Like its brethren, the object is to complete several microgames (not to be confused with larger minigames) given a very short time per game. Only for this DS version, you will be tapping, twisting and rubbing your stylus to advance.

Like the other games, you are given small instructions and you have anywhere from one to seven seconds to complete a particular task. With the stylus, you can cut snot, poke kittens, rub a dirty glass to uncover what's underneath among many other creative variations. There are even some microgames where the microphone comes into use. It's incredibly obvious that Touched! is more than a game; it's a near-complete technical demonstration of everything that the DS can do over the other handhelds.

And while it lasts, it achieves great success. The games are addicting. The art and styles are all over the place. But the overall length is so short. There are a mere 180+ games to rip through. If it weren't for the cumbersome cut scenes, the game would take less than an hour to complete.

I suppose much of the charm should derive from replaying the games to beat your high scores, but a lot can be said for an hour-long initial run through. Also, it's puzzling the wireless capability wasn't put to use. This type of game is totally primed for multiplayer action. 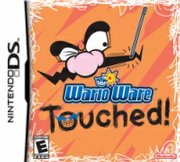 The graphics are all over the place. Some games look like Atari-esque lines and bleeps and some look like some of the best GBA games. All of this art mayhem is intentional, playing into the randomness of the Wario Ware mojo. Still, it's never anything particularly pretty and the cutscenes are downright burdensome. The sound is much the same in its range, but happens to be more charming.

Touched! is a great and appropriate version of Wario Ware. The only real drawback is the painstakingly short time you'll have with it. Luckily, the formula is so addictive you'll be giving it so much more than that once-through.