There are a number of theories about what has the most impact on a movie. Is it the script, the director, the budget, the effects?

I always had leaned toward the screenplay, until this year when a pair of similar movies changed my mind: the biopics "Ray" and "Beyond the Sea." Both were written like a TV movie of the week and prone to thematic missteps. The difference was "Ray" had a perfectly cast Jamie Foxx in the lead role and "Sea" had a way-wrong-for-the-part Kevin Spacey.

"Ray" went on to earn six Oscar nominations. "Sea" drowned in bad reviews and was ignored by audiences

Now casting has creeped to the top of that debated list.

Maybe that's why "Constantine," the latest comic-book adaptation, is so effective at rising above its source material. The cast is comprised of a quirky, unpredictable group of character actors that can't help but put a fresh face on the same type of supernatural-action tale that's resulted in tepid adaptations such as "Hellboy" and "Spawn."

(It's sad how the casting directors never get any recognition.)

Rachel Weisz and Keanu Reeves team to discover the secret behind a suicide victim in the supernatural thriller "Constantine."

And who could forget headliner Keanu Reeves? Usually I can -- especially when it comes to the collect-the-paycheck turn he gave in the abysmal "The Matrix Revolutions." But the brooding Reeves is far more dynamic in this thriller than his last dozen or so movies. It's his best performance since 1997's "The Devil's Advocate," which also placed him onscreen opposite Lucifer.

If "Angel Heart" is ever remade he might want to consider taking the role.

Reeves plays John Constantine, a paranormal investigator who often partners up with the Catholic church to carry out exorcisms and prevent underworld minions from mingling with humans. You know, the usual send-demons-back-to-hell gig.

But time is running out for the man. Incessant chain-smoking since he was 15 has left him with lung cancer. And since he committed suicide as a youth but was "resurrected," he knows this sin ensures him a reservation with the damned when he permanently dies. The proposition haunts him because, "How'd you like to be sentenced to a prison where half the inmates were put there by you?"

The latest comic-book adaptation to juggle supernatural action rises above tepid brethren such as "Hellboy" and "Spawn," thanks mainly to a cast of quirky character actors that can't help but put a fresh face on the material. Even star Keanu Reeves does fine, playing a paranormal investigator who thwarts forces of the netherworld.

For Constantine's latest job he teams with a police detective (Rachel Weisz) whose twin sister apparently committed suicide. She believes her sibling would never have done such an act, and that there are dark forces at work ... even darker than normal. Then when demons begin walking the streets of Los Angeles, Constantine realizes the normal balance in power has somehow shifted.

"We're finger puppets to them, not doorways," he says.

Based on the DC/Vertigo comic book Hellblazer (the title was changed so as not to be confused with "Hellboy" or "Hellraiser"), "Constantine" never delivers a story that is all that compelling. Yet it manages to create characters who are worth the attention.

Constantine himself walks the cynical, aloof territory of most modern noir heroes. But his skills are more interesting -- specifically, his ability to re-enter hell when needed. This requires a peculiar method of "astral traveling" involving a pale of water and a cat. 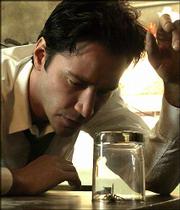 Keanu Reeves plays John Constantine, a paranormal investigator trying to prevent forces of the underworld from roaming the earth, in "Constantine," which opens today in Lawrence.

Rookie director Francis Lawrence, a former music video veteran, paints a rather visionary picture of Hades. It's depicted more like a city that has suffered the aftermath of a nuclear attack ... with ravenous demons.

This is one of many piercing visuals that do a fine job of creating the off-balance, odd-angled world of modern comic books. Lawrence handles these tricks well without overly relying on them. He also proves better at juggling the neo-religious elements central to the story far better than, say, the last two "Matrix" films. Suddenly, Reeves doesn't seem so ridiculous.

But even though the casting is inspired (throw in turns by Pruitt Taylor Vince as a overworked priest and Djimon Hounsou as an omnipotent witch doctor named Midnite), not every choice pays off. "Holes" star Shia LaBeouf portrays Reeves' youthful assistant, Chas, in a role that could kindly be called extraneous.

"You're not a slave," he tells the kid. "You're a very appreciated apprentice -- like Tonto or Robin."

I think of him more like Incredi-Boy from The Incredibles. He's an annoyance whose only function seems to be to help lure the teenage audience to this rather heady, dark, R-rated venture.

"Constantine" is a MUCH better movie than I feared it would be. After my complete disappointment with "Elektra," I was reluctant to go back to the theater to see yet another comic book hero (?) come to the silver screen. But I took the chance, and I must say I was pleasantly surprised. Despite my misgivings, I was entertained for the full two hours it ran. The special effects were great -- a must when there's a demonic host in the cast. And speaking of the cast, I agree with Mr. Niccum about the spot-on casting in this film! I'm not a big Keanu Reaves fan, but I really enjoyed what he did with the character of Constantine. Balthazar was absolutely perfect...smooth and snappy in a 1980's Robert Palmer sort of way. I even enjoyed Chas, the young sidekick...he provided a bit of comic relief, even though there were several unexpectedly (and intentionally) humorous moments throughout the film.

In fact, one of the greatest delights of this movie is that it takes itself seriously, but not so seriously that it becomes stiff and stodgy. Note especially the scene where Constantine uses the cat and a basin of water to help him transport himself to Hell, or when the detective asks him if she has to take off all her clothes when she attempts the same feat in the bathtub of his apartment (no cat necessary to go to Hell...it just helps, it seems).

I saw this late last night. It wasn't a horrible movie. A rather fun ride. I don't read the comic, I don't pretend to know everything about Catholic Dogma. What I do know is that it was a very visual, somewhat entertaining flick. The characters were compelling. The story just enough interesting items to keep me involved. The scenes of hell being a mirror of our world were quite nice and made for some cool transitions. Keanu was almost too stiff in the first half, but did a lot better, and almost believable in the second. Stormare reminded me of the Russian Maffia, which oddly seemed fitting. It was great just watching him, very creepy.

Overall I liked it. Not the greatest of movies, not the worst. A nice entertaining ride with just enough to make it believable to us laymen.

those who like Marilyn Manson and professional wrestling should be drawn to 'Constantine.' The movie is not only spiritual junk food for religious illiterates, it's another example of the way Hollywood rips off Catholicism.

The plot centers on a chain-smoking, bummed out, demon-hunting detective who's been to hell and back. Constantine's pursuit of demons is not, however, altruistically driven: because he once tried to kill himself, he thinks he's doomed to go to hell unless he can earn enough chips to get into heaven. Lucky for him, he becomes adept at performing exorcisms. Along the way he meets a policewoman who's determined to prove that her deceased Catholic sister didn't commit suicide, and thus can be given a Christian burial. And, of course, he meets a priest, who just happens to be an Irish drunk.

hate to spoil the party, but the Catholic Church does not teach that everyone who commits suicide is destined to go to hell. Nor does it teach that those who do so must be denied a Christian burial. (It did at one time, on the grounds that suicide violated the Fifth Commandment.)

So what does this tell us about Hollywood? First, the fact that the producers of this trash literally tried to induce evangelical Protestants to market this movie for them tells us volumes about the way these guys view Christians. Also telling is the answer that Francis Lawrence, the director, gave to the question of his own faith: 'I'm a skeptic, myself. For all I know, you die and rot in a box and that's it.' Either that or you rot someplace else.