BETWEEN WITNESSES, COURT CLERKS WILL READ ON-AIR PROMOS FOR A VERY SPECIAL "JUDGING AMY": A crew from the CBS News program "48 Hours" took over a Douglas County courtroom Tuesday to prepare to film the upcoming murder trial of Kansas State University professor Thomas E. Murray. Despite the TV-studio feel inside the courtroom Tuesday, crew members said they would fade into the background once testimony began.

WHEN IN LAWRENCE HE'LL DRIVE ON MASSACHUSETTS STREET! THEN VERMONT! THEN TENNESSEE! AND ALL THE WAY TO IOWA! WAAAAAARGH! Former presidential candidate Howard Dean, the new chairman of the Democratic National Committee, will be in Lawrence Friday for a private fund-raiser and public rally at Liberty Hall. Dean, a former Vermont governor, has pledged to rebuild state Democratic parties in largely Republican states. Rex Powell, a retired Lawrence teacher who campaigned in Iowa for the Dean candidacy in 2004, said he was excited. "It's like missionary work," Powell. "His purpose is to go to all the brothers and the sisters in the red states, let them know they are known and cared for, that we'll make this a better country and we'll help fix it." 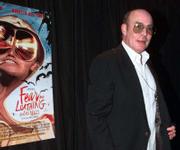 GONZO IS GONE: Hunter S. Thompson, father of the "gonzo" journalistic style that mixed drugs and personal involvement in a story into an innovative psychedelic mix, was found dead Sunday at his Colorado home of a self-inflicted gunshot wound. Thompson was most famous for his book, "Fear and Loathing in Las Vegas," which described - what else? - a drug-filled weekend in Sin City.

AND IN P.E. CLASS, STUDENTS WERE TAUGHT HOW TO KILL A MAN WITH A SINGLE, FORCEFUL BLOW TO THE BRIDGE OF HIS NOSE: A Florida high school chemistry teacher was arrested Monday after students told authorities he taught his class how to make explosives, the Orange County Sheriff's Office said. David Pieski, 42, a teacher at Freedom High School for two years, used an overhead projector in class to give students detailed instructions in bomb-making, including advising them to use an electric detonator to stay clear from the blast, according to an arrest report.

THAT'S NOTHING. ONE TIME WE SPRAY-PAINTED OUR CONFESSION ON A STOLEN CAR: For police trying to track down a bank robber, it was a dollar bill worth much more than a buck. For the bandit, it's a single $1 that cost him life in prison. Prosecutors say Miguel M. Vaca, 45, of Kansas City, Mo., wrote a description of his first robbery on a stolen $1 bill. "I came in the door and told them to give me some money," the note read in part. "It was my first robbery and it felt great." Vaca was sentenced Thursday to life plus 102 years in prison. 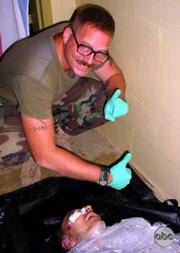 MEANWHILE, BACK AT THE MORAL HIGH GROUND: An Iraqi whose corpse was photographed with grinning U.S. soldiers at Abu Ghraib died under CIA interrogation while in a position condemned by human rights groups as torture -- suspended by his wrists, with his hands cuffed behind his back, according to reports reviewed by The Associated Press.

THAT'S WHY EVERY TIME WE GET JAUNDICED, WE ORDER A CAPPUCINO: That hot cup of coffee may do more than just provide a tasty energy boost. It also may help prevent the most common type of liver cancer. A study of more than 90,000 Japanese found that people who drank coffee daily or nearly every day had half the liver cancer risk of those who never drank coffee.

WE KNOW FROM WATCHING "POLTERGEIST," HOWEVER, THAT THIS WOULD BE THE WRONG PLACE TO SOLVE THE CITY'S AFFORDABLE HOUSING PROBLEM: With the city's treasury looking better going into the 2006 budget-planning cycle, city commissioners Wednesday discussed buying troubled Memorial Park Cemetery. The cemetery was on a list of anticipated budget issues that city commissioners will discuss during the coming months. But that doesn't mean commissioners are enthusiastic about the prospect of acquiring the East Lawrence cemetery, which has been the subject of complaints about its maintenance and the timely placement of tombstones.

WE THOUGHT THAT PICTURE OF VLADIMIR LENIN IN CHANCELLOR HEMENWAY'S OFFICE SEEMED SUSPICIOUS: A proposal to outlaw living wage ordinances - like the one in Lawrence - met some skepticism Wednesday in the Kansas House. "Why should we not allow Lawrence to hurt its local economy?" said Rep. Mike Kiegerl, R-Olathe. "We all know that Marxism is alive and well only in academia." The bill's supporters say living wage laws hurt the economy, but under questioning during a House committee hearing, living wage opponents conceded they had no information the Lawrence ordinance was causing any problems.