There are many questions in life. Some can be answered and some cannot. Well, today one of those questions is answered: What is the best basketball arcade game to date? NBA Street V3 is not only the best in the series, but it continues the legacy of the street series in arcade hoops. Midway's NBA Ballers can't hold a candle to Street's greatness. The Street series has personality now, with a much-improved single player campaign, online play, and true three-on-three action with the help of five of your friends. This game is that close to sweet perfection.

The biggest difference players will notice is the new single player mode. Like I said, this game has personality. EA has done a great job with its sports games in the past year in adding player personalities. Players get upset with playing time or their morale sinks when they don't get along. In V3, your team has morale and some major decisions have to be made during the course of your 10-week campaign during which different players and teams will have events or challenge you to a pick-up game. Perhaps Kevin Garnett no longer wants to play along Allen Iverson. Now you have a decision on your hands, KG or AI?

It's the newly improved single player mode that really makes this game stand out from the other Streets in the series. You'll still be able to pick players up from defeated teams. Eventually you'll even be invited to join the NBA league that is featured in the game: a 14-game season with playoffs. Also back is the reputation system, except this time it actually means something besides your progress in the game. Depending on how high your rep is, you'll get certain invites. With a higher rep, the better the events. Your team can take breaks as well and skip events. Beware, though: skipping events can lead to a falling rep. 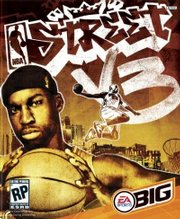 There is also something different with the controls. While most button placements are the same, there is a new trick stick. All the moves can be done with the right analog stick with the combination of the turbo buttons. There are eight directions you can move the stick, totaling for 40 tricks in all. Naming the tricks has been added as well. This was a nice little feature as you can customize certain tricks as Darryl Dawkins used to. For some reason Sexophonic Turbo Delight sounds so much better than Honey Dip. Gamebreakers use the new trick stick too. You have complete control of your Gamebreaker now. You control what the player does instead of watching some flashy cut scene. You can even pass the ball off to a teammate in mid-air for a bigger combo.

Another new feature is the dunk contest. However, this mode was a bit disappointing. It's a shame, too, because NBA Live's dunk contest was such a great innovation that Street could have improved on it. Instead they decided to reuse the Gamebreaker system. It's still great fun, but after experiencing Live's contest it's hard to have fun with this inferior one.

There is one thing I wish EA would have focused more on improving: the A.I. The game still has a ridiculous rubber-band A.I. system. This means that if the human player starts to rock a CPU team, the game will start doing cheap things just to get the CPU team back in it. An example is the CPU team stealing and blocking everything. It's really annoying and just plain lazy on EA's part. Instead of making the CPU think its way into coming back, it just cheats. Another example of the poor A.I. is that when you do certain type of events, like when points can only be scored on dunks, the computer is pretty stupid. Players on the CPU team will shoot threes in the match when they don't mean a thing. Or if it's a trick game, the CPU will never try to do tricks and just score a bunch of points. This is definitely something EA can work on.

Graphically I love the new look of V3. The cartoony effect/look of V2 is gone and a more realistic approach has been implemented. The facial work and animations aren't as good as others, but the game's lighting and coloring is one of the best. You'll notice how beautiful the courts are when the game introduces each one with a little camera tour. I would say the player models look great as well. Everyone has this glossy effect that isn't all that appealing in screenshots, but in motion it looks fantastic. Simply put, the game's graphics are great.

Probably the most disappointing aspect of the game is the sound. The music choice is horrible. Every song will pretty much get on your nerves from the get-go. De La Soul and the Beastie Boys are just a few of the artists in the game that save it. V2 probably still has the best music as the old-school feel really matched the game's theme. V3's music isn't good; there's really no other way to put it. Even the street announcer, Bobbito, gets really annoying after a few games. He seems to say and sing the same things over and over.

Online play is new and is great. The servers are functioning perfectly so far in my experience. Lag is not a problem as long as you connect with the right person. It's not just exhibition online, either. You can go up against someone in the dunk contest, try the NBA challenge, or go through the World Challenge. You can also create an online character and court. If you do decide to do the challenges, your online character's rep will grow and so you'll know exactly who is a good match for you. The online play is great addition as the game's replay value just skyrocketed.

I know I said this before, but I think I need to say it again. V3 is without a doubt the best arcade hoops game out there. If you're not into the simulation games and love high-flying action, get this game without hesitation. The game does have its share of faults -- the sound and the A.I. -- but the game's fun factor makes up for all of that. The PS2 and Xbox versions boast the online play, while the Gamecube version has playable Mario, Luigi, and Peach. The game is deeper, longer, and more fun. Why wouldn't you pick this up?