Movie-to-game transitions have always been a disappointment in the video game industry. There's really only one classic movie-to-videogame translation -- Nintendo 64's Goldeneye. Besides that game, most games based off movies are not very good. The Lord of the Rings games are considered good, but nowhere near Goldeneye. Constantine was just recently released in the theaters, and the game translation has also been released. Does it match the greatness of Goldeneye or does it follow the common path of movie-to-videogame failure?

I'm just going to come straight out and say that Constantine is one of the worst games I have ever played. Yes, that's a bold statement, but nonetheless true. The controls are horrid. They don't feel smooth at all, and the poor production values of the controls are very noticeable. Once you move John Constantine around for the first time, you immediately know this game is going to suck. The camera is pretty bad, too. The most annoying thing is that when you walk into corners the camera switches to a highly unnecessary first-person view. The transition isn't smooth, and it makes the camerawork rigid. The gameplay is basically a shooter adventure. The actual shooting is a complete joke. There's no recoil action, the sound effect could have been done better with Black Cats, and it simply is not fun.

I have not seen the movie yet, but if the movie's plot is as bad as the game's, I don't ever plan on seeing it. The story is confusing and there were many moments where I had no clue what was going on. This not only hurts the game's enjoyment, but it affects the objectives. What am I doing? I asked this question many times. I'd collect items as a goal, but the game never really shares what the item and its significance are. Maybe if I saw the movie I would have a better understanding, but a game shouldn't have that requirement for someone to enjoy it. 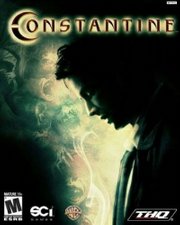 When I first saw the real-time graphics, I thought I was playing a PSOne game. The graphics are not even close to par with today's systems. The framerate is choppy, the visuals aren't fluid, the textures are crude, and there are jaggies galore. The environments you'll encounter are inside buildings and city streets, and then those environments will be replayed but with a hell theme with fire everywhere and a gas effect. It still looks like the game is played on a PSOne. The game is ugly, and there's nothing more to it.

The audio is no better than the graphics. The poor effort that went into making the sound of the gunshots, as mentioned earlier, sums up the rest of the sound in the game. When you do enter the hell environments, the sound is really annoying. There is this woman wailing in the background who is suppose to convey the pain and suffering that hell offers. Well, she does a pretty good job of inflicting pain and suffering onto the player. The music isn't noticeable, so I guess I really can't complain about it. The only thing that impressed me audio-wise was the voice acting of John Constantine. Bits Studios wasn't able to get Keanu Reeves to do his voice, but the actor who filled in did a pretty good job in imitating Reeves. It's actually kind of funny, sometimes. Of course the game is filled with cheesy lines and whatnot, but this is to be expected as the game tries to be too cool most of the time.

This is not a game I recommend to anyone, not even to a hardcore fan of the movie. Don't buy it, don't rent it -- only play it if somehow and some way you are able to play it for free. If you do find someone who does own this game, feel free to make fun of them, because they just wasted their money.

LOL. I can't believe I just noticed this.

Thanks for your insight. I'll pass it on to Hanluen. Didn't realize elementary school had internet access.