Great multiplayer on one hand, forgettable single player mode on the other.

The original MechAssault was a great start for the Xbox Live service and really excelled in blow-stuff-up-ery. The premise: pilot your 1- to 10-story tall walking robot, trouncing through towns and creating as much havoc as possible. The barebones online component was solid, but it needed more. That's what we get with MechAssault 2: more.

Derived from the MechWarrior series, the MechAssaults don't get nearly as complex as its spiritual parent, but definitely make up for it in the amount of carnage and fast-paced action packed in the game.

Of course, the most rewarding carnage will be had online, as the single player experience is a very brief series of fumbling plot points, uninspired level design albeit graced with solid gameplay mechanics. The entire five hours it takes to complete the campaign mode is filled with boring AI routines and mindless mayhem.

It's in the wonderfully executed mindless mayhem that you must lose yourself to dull the pain of the terrible voice acting and story trying to save five data cores from being combined to destroy the world...zzz... But if you can endure the boredom, you'll come away with a better knowledge about how most of the many available mechs work, so that you can be better prepared to not suck online. You'll get the hang of jacking other mechs by "hacking," which essentially is pressing a random amount of buttons before time runs out. You'll also get used to doing so in the light-mech BattleArmor that is weak but insanely agile and able to bounce you from mech to mech in no time. The single player experience would be considered amazing if it were instead called "training mode."

So, even given the delightful buffet of 30+ mechs that are widely varied and provide a great balance and variety, if you are not equipped with Xbox Live, it's tough to recommend this game.

But with Xbox Live, MechAssault 2 really feels at home. There are so many modes to pick. Destruction (deathmatch) and Capture the Flag are there for purists, but out of the many, Base War and the clan-enhanced Conquest mode are where you'll have the most fun. Base War has you out to destroy the other team's base before yours is. Sounds simple on paper but really makes team play cohesive online.

Conquest mode sets your team or "house" against others, trying to fight for your big share of 40 different planets all having different gametypes. It makes all the gametypes come together in a pretty solid package as long as everyone you encounter knows what's going on. Right now, Conquest modes take forever because of the convoluted lobby system that has a huge learning curve. It's too bad the UI blows because Conquest has great potential.

The weapons and mechs are all modeled well, enhanced greatly by the lighting effects and multiple particles that inevitably fly past you in the destructive chaos. This is juxtaposed with blurry textures and uninspired architecture. The sound effects are phenomenal and the music is so-so. Korn and Papa Roach provide most of the music, which compromises MechAssault 2's personality, as no care was taken on implementing the music with the mood of the on-screen scenarios. There is a respectable score littered throughout the unwelcome 'music.' 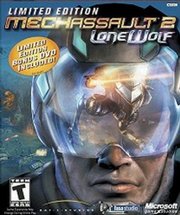 MechAssault 2 is catching its stride online. There is no room for argument. Destroying things in a fury has never felt as rewarding as it does in this game, but questionable single player experience, menu design and music really hinders what could have been stellar.