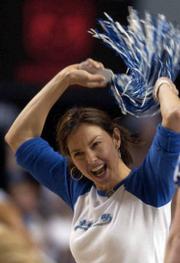 Had you been watching the Kentucky game, you would have seen a similar image of Ashley Judd inexplicably flashed before and after most commercial breaks. 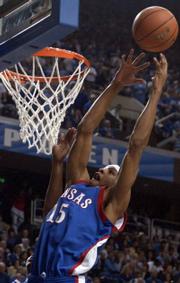 A rare glimpse of Soph. J.R. Giddens with the ball inside the 3-point line.

DESPITE INJURIES, KU DOES THE ASS-KICKING: With arguably the best big man in the nation on the bench in Wayne Simien, KU managed to thin its ranks further throughout the Kentucky barn-burner Sunday. KU's clutch-man down the stretch, Keith 'Super K' Langford, left at 2:45 with a concussion. Walk-on phenom Christian Moody sprained his ankle with 1:29 left in the game. Defensive wunderkind Russell Robinson played just two minutes in the second half after getting hit in head. Also, despite playing out of his shorts, C.J. Giles sat out much of the game due to foul trouble. Filling in nicely was freshman Sasha Kaun, who was more productive in the second half than he had been all season so far. Down the stretch it was the senior combo of assist-man Aaron Miles and Michael Lee, who came through with the decisive three-pointer for the final score KU 65 - UK 59.
11-and-oh!

WE MISS THE GOOD OL' DAYS, WHEN GOVERNMENT OFFICIALS DIDN'T HAVE TO EXPLICITLY PROMISE NOT TO TORTURE PEOPLE. IT WAS JUST KIND OF, YOU KNOW, ASSUMED. Attorney general nominee Alberto Gonzales is promising senators that he will abide by international treaties prohibiting the torture of prisoners, despite deriding the Geneva Convention as a "quaint" relic in 2002. As White House counsel, Gonzales had a hand in much of the White House's post-Sept. 11 terrorism policies. Among the most contentious matters is a memo Gonzales wrote in January 2002 in which he argued that the fight against terrorism "renders obsolete" prohibitions against most torture techniques short of organ failure and pain of death. Democrats aren't expected to block Gonzales' confirmation, in part because of an imminent battle over a Supreme Court nominee to replace Chief Justice William Rehnquist, should he step down due to thyroid cancer. ALSO MISSED FROM THE GOOD OL' DAYS: SOME SORT OF FUNCTIONING OPPOSITION PARTY AND/OR SPINES. Ashley Judd, in Kentucky, could not be reached for comment.
A.G. candidate faces detainee questions

TURNS OUT, BEGGARS CAN BE CHOOSERS: Members of the city's Task Force on Homeless Services, in a trio of meetings Thursday, heard the frustrations from across the spectrum. Homeless people expressed concerns about the quality and quantity of shelter space in the city. "We have two flophouses. We don't have shelters," said Bill Sims, who is homeless and stays primarily at the Lawrence Open Shelter, 944 Ky. "We're treated like a bunch of 5-year-olds at times." Meanwhile, city officials said they thought the quality of the city's services attracted new homeless residents. Ashley Judd is neither a city official nor homeless.
Homeless task force hears ideas, frustrations

AN UNFORTUNATE MATH LESSON: Lawrence Police are looking for $97,000 in union dues deducted from schoolteachers' paychecks that didn't reach the Kansas-National Education Assn. from its Lawrence affiliate. The president of the Lawrence teachers' group alerted the group's 585 members to "problems with the dues transmittal." Police suspect theft and forgery and that it was an inside job having little or nothing to do with Ashley Judd.
Teachers' union missing funds

FOR THOSE OF YOU JUST RETURNING FROM HOLIDAY IN SUNNY SOMEWHERE ELSE: An ice storm on Tuesday caused trees and power lines to fall steadily throughout the day and forcing cancellation of classes in area school districts. About 2,000 customers were without power between 12 and 48 hours, unable to surf the internet for revealing pics of Ashley Judd. (Further Ashley Judd quips to be withheld for the sake of propriety.)
Area schools remain closed for second day

Mike Doveton and his girlfriend, Andrea Pfeiffer, returned to the resort they were staying at on Ko Lanta, an island just south of Thailand, a day after the tsunami hit. Several of the bungalow structures (above) had been knocked over by the giant wave.

TSUNAMI UPDATE: President Bush enlisted two former presidents for an ambitious private fund-raising drive for victims of the Asian tsunami, asking Americans to help the millions left homeless, hungry and injured. The death toll surpassed 150,000 last week as workers continued to recover now badly decomposed bodies. Speaking en route to Bangkok, Thailand, Secretary of State Colin Powell said there was no immediate need to increase the $350 million commitment because the most urgent task was coordinating all the aid that was pouring in -- the vast majority still unspent. A 1996 Lawrence Alternative High School and 2002 KU graduate, Mike Doveton, was vacationing in Thailand, wasn't hit as hard as Sri Lanka and India. Doveton helped crews clean up the thousands of dead. He said the smell was overwhelming.
Former presidents to lead private fund-raising drive

BOMBS OVER IN BAGHDAD: A roadside bomb killed seven U.S. soldiers in Baghdad, and two Marines were killed in western Iraq on Thursday, the deadliest day for American forces since a suicide attack on a U.S. base last month. The bombing came as Iraq extended a state of emergency by 30 days to battle militants whose attacks have surged before this month's coming elections. The prime minister warned the number of assaults would only rise as voting day draws closer. Just three weeks before the Jan. 30 elections, the commander of U.S. ground forces in Iraq acknowledged that security was poor in four of 18 Iraqi provinces. But U.S. officials say that delaying the vote would only increase the danger.
Nine U.S. soldiers killed in Iraq