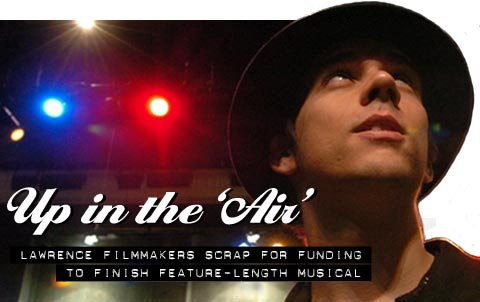 After two hours of setting up a camera, putting lights in place and otherwise getting organized, it is time to shoot the day's first scene for the movie musical "Air."

"Roll camera," director Jeremy Osbern murmurs. Then, over the fierce buzz of the rolling film, he calls out: "Action!"

Sixty feet away, actress Megan Carter walks out a door and crosses the stage.

"Cut!" Osbern shouts, and the camera buzz subsides. "Brilliant!" exclaims a nearby assistant.

Hollywood? Nope. The scene was shot Saturday morning at the Lied Center in Lawrence.

If all goes well, Osbern and his producing partner Chris Blunk -- both recent Kansas University graduates -- hope that short scene in "Air" will be part of something much bigger: the growth of Lawrence's nascent filmmaking community into a nationally recognized force.

"There are a lot of talented people here," Osbern says. "We're just trying to be part of that, making a movie in this area with local talent, both in front of and behind the camera."

Before that can happen, though, the filmmakers have to find more cash to pay for the movie's $100,000 budget.

When completed, "Air" will tell three interweaving love stories involving couples who feel the world is deteriorating around them. That's where the music comes in.

Actress Megan Carter rehearses a scene on the set of "Air."

"We're incorporating all different styles of music; that's how we're trying to show that these people feel out of place in the world," says Osbern, who wrote the script. "So we've got an African-American businessman who, when he breaks into song, it's country-western music. We've got the quote-unquote 'goth chick,' and when she breaks into song it's an old '50s ballad."

Osbern and Blunk are in the midst of shooting the first of the movie's three stories, with actors Carter and Ian Stark as a pair who meet when their cars collide in a head-on collision.

"This has given me a chance to see that there is a thriving film community," says Carter, a KU student whose only previous screen acting experience was in an educational video for the Kansas City Zoo. "There's so much talent that I didn't know about, people who are so dedicated."

Osbern and Blunk, in fact, are quite experienced. Osbern, a Lawrence native, helped make a 10-second short that appeared on MTV in 1992. He also directed "Evaporated," an anti-smoking documentary in 2001, and "The Passion" a short film. Blunk, meanwhile, produced "Ideal," a highly lauded student film at KU.

The two stayed in Lawrence after graduation and formed "Through a Glass Productions," which produces commercials and wedding videos.

"There's also some advantages to doing film here that you don't get on the coast," Blunk says. "It's cheaper here."

Making a feature-length film, though, is a new challenge. And the fact "Air" is a musical only complicates things.

There's the question of casting actors who can sing, or dance, or both.

"It's ironic. I'm not a very good dancer," admits Carter. "But I have a very good choreographer."

There's the technical challenge of capturing dance on film.

"We're going to try to hold on the actors so you can see what they're doing, so you can actually see the dance," Osbern says, "as opposed to seeing the dance from 20 different angles and just knowing that someone's dancing."

And there's challenge of coming up with original music.

"Musicals are a really tricky thing," says Steve Unruh, a former Kansas University student -- and former next-door neighbor to Osbern -- who is composing most of the film's songs from his home in Providence, R.I. "They can come off as cheesy and bad if you don't do it exactly right.

"So we're going to do it exactly right."

There's also the challenge of coming up with enough money to pay for the project. Osbern and Blunk say they're raising money from around the country -- much of it in chunks of $100 -- but still have a long way to go.

"If we had as much money as we wanted, we could probably have it done by the end of the summer," Blunk says. "The way it is, money trickles in from investors."

As a result, shooting is confined mostly to weekends, with cast and crew earning a living from day jobs during the week. Some of the crew worked on KU associate professor Kevin Willmott's movie, "CSA: Confederate States of America," which will reportedly be released by IFC Films this year, and take inspiration from the similar challenges of that moviemaking experience.

"CSA has helped a lot," Blunk adds. "Kevin Willmott did a fantastic job showing you can get the movie made and can get the movie seen. He's really been an inspiration for what you can accomplish in the Midwest."

Osbern and Blunk hope to complete the film by the end of 2005. After that, they hope to show it at festivals and, perhaps, find a distributor who will give it a wider release.

And if it makes money, Osbern says, he'll use it to make even more movies in Lawrence.

"A lot of KU (film) students move to the coasts, either New York or L.A.," Osbern says. "But I'm from Lawrence, lived in Lawrence all my life and I really would like to see more movies made here."