Review: The Legend of Zelda: The Minish Cap - GBA

Minish Cap keeps the series setting a standard at a blazing pace.

No series has ever maintained and perfected an identity as much as the Legend of Zelda series. There have been maybe a game that tried to duplicate its meticulous formula but failed. Every time Nintendo puts a stamp on the newest Zelda adventure, it's guaranteed pure gaming bliss.

Played from the traditional top-down 2D perspective, Minish Cap thrives on the same structure of A Link to the Past and the Oracle games on Game Boy Advance (GBA). The basis of the game is very much the same, traversing a sprawling map to collect items to enable you to get still other items. You must find four elements to fuse together the mysterious broken sword in order to defeat an evil sorcerer named Vaati, who just turned Zelda to stone.

The same dungeon crawling is here and you get to complete your adventure through the magical Minish, a race of very tiny people. Throughout your adventure you'll encounter portals that shrink you down to Minish size in order to get into new places and view the world from an entirely different perspective.

This new twist - along with additions like allowing Link to fly or turn objects upside down - make the puzzle element possibilities skyrocket. None of that potential is wasted, either. There are plenty of puzzles, levers and switches in traditional fashion that polish the rock, paper, scissors quality of Zelda's gameplay.

The combat is solid. You can even upgrade your attack abilities through trainers upping your agility and sword handling. The boss battles are all very engaging and rewarding, although many familiar with the series will have no problem parading through the dungeons without much difficulty. Luckily there are many side quests and item hunts to keep the gamer busy for hours.

The GBA never ceases to impress with its graphical capabilities. On a 2D scale, everything is beautiful and the art direction is to be commended. The viewpoint of tiny Link is fully realized and really makes you think you've shrunk. The music and sound is equally fantastic with newer versions of classics and new themes altogether squeezing all the potential out of the GBA hardware.

The Zelda formula never gets old. Having such strong and original roots, I am not sure if it ever will. If you've never played a Zelda game before, you owe it to yourself to start here for a pleasant introduction. If you're a fan, there is absolutely no reason you shouldn't be playing right now. 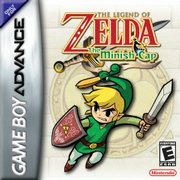