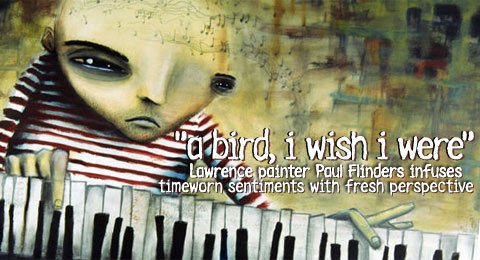 Most poets will tell you the hardest subject to write about is love. The moment the words hit the page, they seem trite and sappy.

Visual artists run the same risk when attempting to convey lessons of the college-admission-essay variety: seize the day, embrace life, don't put off 'til tomorrow what you can do today.

As stale as these mantras can become, young Lawrence painter Paul Flinders manages to examine them afresh in his first solo exhibition, "a bird i wish i were," on view through Jan. 28 at Olive Gallery and Art Supply, 15 E. Eighth St.

For the most part, his methods are subtle -- and often humorous.

In "Free Corporate Liquor," a crew of sock puppets dressed in suits and ties tip back bottles of booze and smoke cigarettes at a bar. They wear nearly identical jackets, ties and expressions, indicating a mind-numbing sameness. Similarly, the besuited man-puppet in "The Sock Puppet Suburbanite" emits an emptiness that seems borne of mediocrity.

Flinders addresses this notion in his artist statement: "I've found hopelessness in seeing people literally as puppets. They seem to have been transfixed by the daily tedium that keeps them from exploring their potential.

"a bird, i wish i were": mixed media by Paul Flinders

"But I have also found hope in the possibility that everything can change."

With that in mind, Flinders' mixed media works on paper move from a pianist who sits, forlorn, unable to play the lovely melody he hears in his head and a writer frustrated by the futility of trying to pen the perfect combination of words, to scenes of empowerment: A man wielding a brush and gallon of paint has just finished slapping a new color on his wall in "Change." And, in "Open Up," a man has levitated above his ordinary spot in an armchair and is resting serenely upside down on his living room ceiling. "Sick and tired of gravity, he began to explore greater possibilities," Flinders has penciled directly onto the painting. 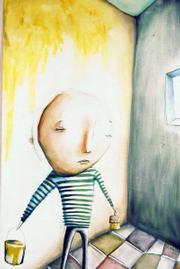 The artist works in mixed media, first adding texture to the paper by manipulating a medium with a brush and then layering on oil paint, pen and pencil. The worked backgrounds provide rich depths that effectively emulate, for instance, the way light can make a flat painted wall appear dimpled and plastered. His style has a whimsical illustratorly quality. Exaggerated, disproportionate features make the human figures appear more like cartoon characters than real people.

Flinders chooses compositions and perspectives that wisely show narrow slices, zoomed in only on what's crucial to the scene. And the viewer feels clever for being there. One can't help but chuckle at the familiar simplicity of "As Breakfast Smiled Back, He Knew It Was Going to Be a Wonderful Day," in which a wide-mouthed man with eyes bugging out the top of his head grips his giant teeth as sunny-side-up eggs and an upturned strip of bacon grin back at him from his plate.

The exhibition takes its title from a handful of pieces that depict quartets of tall, delicate, spindly legged birds. They appear outwardly awkward, but their eyes betray a seasoned wisdom. Maybe they've suffered because they're different (as Flinders writes in one of the more literal narrative works in the show). If so, it seems to have taught them -- standing tall as they are -- that life, in all its horrible misery and gleeful euphoria, builds character.

The pleasure and pain are both worthwhile, Flinders seems to be saying, as long as you learn from your experiences to "span the distance between your head and your heart" (another excerpt from one of his works).

In his debut exhibition, the youthful Flinders pulls off something fresh and exciting without resorting to cheesy convention.

Those struggling love poets would be proud.