When "Flaming Idiots" -- a new farce being staged by the Lawrence Community Theatre -- opens Friday, it's going to be a challenging experience for Charles Whitman.

Though he's a veteran comic actor, Whitman won't be out there with the cast. Instead, he'll be in the wings with the rest of the offstage crew.

That's because Whitman is directing the theater's production of "Flaming Idiots."

It's a position he's still getting used to, as this will be only the second time he's overseen a show. Last year, he took the helm of another comedy, "Nurse Jane Goes to Hawaii," at the theater.

"I like directing, of course, because it gives you the opportunity to look at the production as a whole, which is a perspective you don't have if you're on stage," says Whitman, a Lawrence attorney.

"The other aspect of it is that you get to work directly with the other professionals -- the craft people responsible for the sound, lighting, props, costumes, set design and publicity. The director gets to work with all of those people in creating a unified whole."

But being in charge of a show still represents a transition for Whitman, a member of the Screen Actors Guild who's had parts in five or six films, including "The Day After," the 1983 made-for-TV movie that depicted a post-nuclear-blast Lawrence.

"The other side of it (directing) is that you don't get to be onstage. If you're onstage in a comedy, you have a real one-to-one relationship with the audience. That's a really exhilarating experience," says Whitman, who's been acting since 1978. 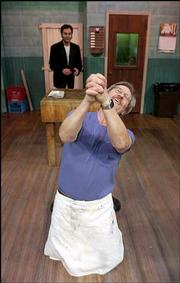 Steve Nelson, who plays an unemployed actor, drops to his knees during a rehearsal of "Flaming Idiots" at the Lawrence Community Theatre. The cast practiced Wednesday.

"Manifestly, you can't do that as the director. It's in the hands of the actors, the crew and the stage manager. There are some trade-offs both ways. But I've made a decision that I'd like to continue directing, if I'm asked."

"Flaming Idiots" opens Friday and runs for three weekends at the theater, 1501 N.H.

"Flaming Idiots" is a comedy about two former postal workers who decide to start their own restaurant.

Needless to say, the results of their bumbling efforts are more comic than culinary.

After a neighboring restaurant achieves instant success when a mobster is gunned down while dining there, the fledgling restaurateurs decide to engineer a fake mob hit to duplicate their competitor's dubious fame.

The title of the show isn't a reference to the two restaurant owners. Instead, it's taken from the name of something they serve.

"'Flaming Idiots' refers to a drink that they come up with to promote as a special. Their place comes to be known as a result of the local food reporter's writing about the restaurant, writing about the drink," Whitman says.

The show, which runs about 90 minutes, features Brent McCall and Mark Mackie as the restaurateurs, Dan Spurgin as the mounted policeman, Steve Nelson as the unemployed actor, Daniel Studley as the busboy, Don McIntyre as the hit man, Barbara Johnson as the chef and Aisha Wolgamott as the reporter.

Whitman explains the theatrical elements that typify a farce such as "Flaming Idiots":

"The characters are placed in a situation that they create pretty much for themselves, various impediments are produced for them, and they get around those impediments in a funny way," he says.

"It's characterized by a lot of mistakes, mistaken identities, near misses. You can always tell a farce, because the actors are always coming in or going out a door. I call this (upcoming show) a five-door farce."

Another aspect of farce is that it's physical, relying upon comic devices and good timing.

"Most farces don't have much plot. It's a setup," he says.

In the end, everything comes out right and there's resolution.