Pick your cliche: A triumph! A thrill ride! Sets the standard!

Resident Evil needed a rebirth. Although the last two permutations were great to look at, neither of them rekindled the glory days of the survival horror genre. Most view it as an archaic genre. I was never a fan, anyway.

Well, you may now count me in.

Not only is Resident Evil 4 a much-needed shift in the series, but the new gameplay elements and stunning production value will completely resurrect fans and inspire any new survival horror title.

Leon S. Kennedy of Resident Evil 2 fame has joined the U.S. government after the whole meltdown of the Umbrella Corporation. His current mission is to rescue the president's kidnapped daughter from some mysterious villagers in a remote location in Europe. It becomes clear that this remote location is near Spain, since the villagers all scream and chant in what seems to be crass Spanish.

Gone are the mindless, one-dimensional zombies. In are nearly-possessed villagers, wild animalistic creatures and absolutely horrifying creations. In the beginning, Leon asks a villager if he has seen the president's daughter. The villager becomes insanely angry and tries to split Leon open with an axe. At that moment, the cabin you are in becomes inundated with angry villagers attempting to take your life. This sense of urgency can only be qualified as intense survival. Capcom lets you know immediately what this game is about.

There are many places you can shoot an enemy. The foe will buckle, trip, lose an arm or die instantly depending on where on the body you hit them. It's not always the same for each enemy, but with each new evil you encounter, there will be a new way to figure out the most effective ways of killing it. Also, if you find yourself near a stumbling enemy, an A button action prompt will appear to knock the enemy down with a swift kick. The action button is also useful to jump out of windows, jump off ledges, climb and many other context-sensitive moves. It is implemented seamlessly and adds exponentially to Leon's freedom. 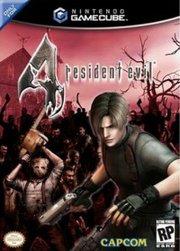 Leon's arsenal is vast. Instead of finding weapons, you buy new weapons from the many merchants you'll find throughout the game. As you progress, there will be new types to buy. From pistols to magnums to sniper rifles to mine throwers to shotguns and more, Resident Evil 4 has a healthy array of firearms to wield. To hold more, you must purchase larger attache cases along the way. Not only that, but you can purchase upgrades to make the weapons even more effective as the enemies get tougher. Each weapon has its uses. And even though it takes a few shots to down some enemies, it's always plain when an enemy is hit because of the wonderful animations. Even when the enemy doesn't die, the impact of your fire is extremely satisfying.

To fire, you press the L button and aim with the left analog stick. You can't move when you fire. You can't strafe. There is no aiming reticule. All of these were obvious design decisions that were meant to heighten the survival experience. First-person-shooter-only fans will have a tough time jumping right in, but the game was tuned for the pace of the controls and it works marvelously. There wasn't any time where I missed the dual analog experience.

Resident Evil 4 also packs many surprises in the gameplay department. One of the elements is prominent throughout the game and may seem gimmicky at first, but actually serves to pull you into the action and story more. But, we can't talk about it. The surprises in the story along the way are significant and build a great amount of mystery as to what really is going on. It builds so much that the resolution doesn't live up to the intense mystery. Oh, well. No biggie. That minor detail is completely overshadowed by the wonderful boss battles, fun puzzles and jaw-dropping environments.

When I played the bosses, I had to drop the controller at times to make sure that my character stopped when I wasn't controlling him. Why? Because I couldn't believe what I was watching was during gameplay. Resident Evil 4's actual gameplay makes other games' pre-rendered cut scenes look bad. It's a plain and simple truth. The environments are sickeningly detailed to the last fragments of a splintered bone. When you think some building is static in the environment, some big baddie just demolishes it as particles go flying everywhere. The few locales never get old because of the attention to detail and lifelike look to it all. You are completely involved in the environments.

It's amazing something like this was pulled off on a console. In fact, Resident Evil 4 is the best looking game I've ever seen on a home console, trumping such efforts as Chronicles of Riddick and Metroid Prime.

Also, like the many enemies, each boss behaves differently. There is a new way to defeat each of them. Sometimes, your mere arsenal isn't enough. Scour the environment to use it to your advantage.

Resident Evil 4 is as linear as can be. But that isn't bad when the first time through will take you an honest 20 hours to complete. The unlockables extend the game's life. Furthermore, the level design is impeccable. You have a map that shows you where you need to go, but you'll never need it. Just when you think the gameplay is about to get redundant, the game throws you a curveball, again and again, to keep things fresh even until the very last sequence in the game. No, really. The very last gameplay sequence is new to the game.

Resident Evil isn't about cheap scares since there are usually musical cues to when you are approaching an enemy. Well, there WAS this one time : Anyway, as the minor-tuned orchestra swells in the background, Capcom delivers a spine-shivering situation of, well, survival. There were a handful of things that made me jump, which is hard to get me to do. More impressively, there was an entire sequence in a sewer where I had no idea where this certain baddie was, but I knew he was faster and stronger than me. The dark tunnels and dreary, dirty environment all worked hand-in-hand with the dazzling presentation to actually make me feel scared. That has only happened once before in a video game (Eternal Darkness). Of course, it helps when I am playing the game on an 80" widescreen with all the lights off and the surround sound very loud. Do yourself a favor, play the game in the dark with the sound up. Annoy your neighbors. Just do it.

Obviously the graphics are stunning. The animations look brilliant. The fire looks real. The heat effects pop off the screen. The lighting is perfect. The architecture oozes with personality. The boss battles look like CG movies. It's a technical showpiece that the Gamecube will cherish. No one thought this could be done on a console, especially with such a solid framerate.

The sound environments are creepy, solitary and wonderfully relevant to every different setting. Each weapon has a hearty thump to it, if necessary, and sounds wonderfully effective. The musical score is beautiful and frightening, movie-quality and varied to fit the situation. The voice acting is okay for a B-movie, but I think some of the main evil characters didn't need to be so cheesy, which sort of contradicts the tone of the environments. Regardless, for a video game, few audio efforts come close.

Resident Evil 4 is a triumph of epic proportions. That should mean a ton coming from someone who was never a fan of the series. It will surely resurrect not only Resident Evil games but the entire survival-horror genre. With amazing and satisfying gameplay matched with unrivaled presentation, it's sure to go down as one of the best games ever made.

I got thru the game in about 7 days, but I was hurrying through it since it was only a rental. Wow is pretty much the only way to describe it. Each boss just tops the one before. Not to mention some of the gruesome animations which just come out great. I had to get killed by the chainsaw wielding maniacs a few times just because I enjoyed seeing that animation so much. But yeah, overall, its the best experience I've had in a game in a long time. The and seemed kind of rushed compared to the beginning, but that's not neccessarily a bad thing. Plus I did find the final boss to be one of the easiest. But there are a lot of extra things to look forward to after beating the game, such as the side missions and finding all of the treasures and combining them correctly. Too much good stuff to say about this game and not enough bad things...until the PS2 translation which will be choppy and perhaps create a significant differnce in the overall quality of the game. But, that's what happens when developers realize they need to switch to another system to get their profits I guess. Oh well, at least the Cube owners can have this game in the better form. :)

Thanks for the good review. I can't wait to buy this game.

It won't. The processing speed of the PS2 won't be able to handle that much data. They may get around it with more loading times...but it won't be anywhere the quality of this one.

I just finished this game and I too believe it is one of the greatest games ever made. I haven't had this kind of "straight up fun" with a game in so long that it was refreshing. This is exactly what the series needed, a refresher. Plain and simple, there is no down time in this game as it seems you are just riding an escalator all the way to the top. There were certain parts in the game where afterwards you let out a big sigh and have to quote Tommy Boy in saying, "That...was AWESOME!" Not only is the game exhilerating from the beginning, the game tops itself over and over. I was simply amazed at this aspect of the game. Anyone who owns a Gamecube must have this game and anyone who doesn't own one should seriously think about getting one. Although the game will be on PS2 later this year, I highly doubt the quality will be as complete as it is on the Cube.