"America is so much about the strip mall," says Jolie Holland while driving from San Francisco to Los Angeles. "And I've never written a song about a strip mall."

Those familiar with Holland would not expect her to deal in anything linked to cookie-cutter commercialism. The 29-year-old is an artist whose music is as wide-ranging as the highways traveled throughout her career.

Born and raised in Texas, Holland has spent her adult years as a musical gypsy. Lengthy stops along the way found her collaborating with bands in Austin, Texas, New Orleans and Vancouver, British Columbia. After a stint with the esteemed female folk trio The Be Good Tanyas, she eventually ended up in San Francisco, where she's pursued her solo calling since 1996.

On her latest album, "Escondida," Holland further expands her sound, personally dabbling with guitar, ukulele and violin, while fellow players contribute everything from marimba to musical saw.

Stylistically, her material is an eclectic spillway between old-school jazz, traditional blues and country-folk. Her voice provides a distinctive mix of breathy songbird and modern ironicist -- like a 1920s torch singer wearing a Ramones T-shirt.

"I'm just a writer and kind of a huckster," she says. "I steal little bits and pieces and barely know what to do with them."

Her melodic larceny will be on display Saturday at The Jackpot Saloon, 943 Mass.

Q: How have the various places you've lived affected your sound? 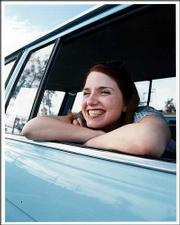 Kate Kunath/Special to the Journal-World

Eclectic musician Jolie Holland, formerly of the female folk trio The Be Good Tanyas, brings her solo act Saturday to The Jackpot Saloon, 943 Mass. She says her road show is "probably a little wilder than what you might expect from hearing the records. It's a little bit more in the direction of rock 'n' roll."

A: I really didn't hear a whole lot of regional music anywhere I've lived. The real way my travels have affected my music is there are all these stories, and the stories are true. But as far as any sort of place affecting the sound, that's not a real thing. Like I've probably learned more about Georgia blues while living in Canada. It's all about the recordings, really.

Q: Is the music industry too concerned with labeling artists in terms of their genre?

A: I don't know. I'm on a really special label (Anti-). My record industry people are like angels from heaven. I don't have any pressure to do anything I don't feel like doing. I think most of the music industry is going to hell in a handbasket. And they can go for all I care.

A: It's probably a little wilder than what you might expect from hearing the records. It's a little bit more in the direction of rock 'n' roll, some of which merits it being in the "rock section." The records are a little bit sleepy. You can't do that kind of stuff onstage.

Q: Do you have any superstitions that you follow to prepare for a performance?

A: I'm superstitious about some things, but shows aren't one of them. I'm just infected with all this East Texas superstition. I inherited it from my family. One of my things is if you see a one-eyed car you're supposed to spit. And here's a good one: You're not supposed to tell your dreams before you eat breakfast, otherwise they'll come true.

Q: So if you write a song based on a dream do you have to record it before breakfast?

Q: What was your last job before going full time as a musician?

Q: Were any of those waitressing skills applicable to writing or performing music?

Q: On "Old Fashioned Morphine" you mention Lawrence icon William S. Burroughs. Are you a fan of his work?

A: I had a dream about Burroughs. But it was a very momentous dream. Ever since then I've felt close to William Burroughs. It's very weird. I was hanging out with this friend of mine, Chad, in real life, and we would go on really slow walks around the block. He was this old guy -- I think that's what precipitated the dream. I ended up having a dream where I was William Burroughs' girlfriend. There wasn't anything graphic or gross in it. But I dreamed me and William Burroughs woke up in bed together, and I was like, "Hey Bill, let's go for a walk" -- thinking about his health or whatever. And he goes (in a gravelly voice), "Don't treat me like an OLD MAN."

Q: Are you still happy with the decision to leave The Be Good Tanyas and go solo?

A: Keep your right hand as relaxed as possible.

Q: Does that extend beyond guitar playing?

A: It's actually more about violin playing. Oh, and another good one is that if you are really listening to yourself, other people will listen to you, too. I think it's a weird piece of mystic advice that really does hold true.