The local music show on The Lazer was supposed to be celebrating its 10-year anniversary this year.

Instead, Lawrence's KLZR-FM 105.9 rang in 2005 with the abrupt dismissal of the show, coinciding with the station's format change to adult-oriented "Hot AC" (recent playlists include Sheryl Crow, Coldplay, Kelly Clarkson and Goo Goo Dolls with little trace of rap, hip-hop or R&B).

The show's cancellation effectively eliminates any traces of the "old" mid-'90s Lazer that supported local bands like Ultimate Fakebook and Frogpond and featured an adventurous alt-rock format.

"At this point in time we don't think it's the best use of our air time," said Covert, who moved to Lawrence from Columbia a month ago to assume the GM position. "That's taking nothing away from the local artists, but this particular station is a mass-appeal radio station."

Covert is the CEO of Viking Communications, a new company formed to operate KLZR, KLWN-AM (news-talk) and the recently acquired KKYD-FM "Wild" 92.9 in Topeka. 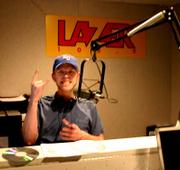 Covert said KKYD's "rhythmic" format - mostly R&B and hip-hop - would serve the area's younger and college audiences. KKYD could potentially develop a new local show "if the public shows a desire for it and it's something that makes good sense for the overall programming of the radio station," he said.

"We're also looking at some other options for doing some local music on KLZR, but more stuff that might fit the format - maybe some acoustic stuff," Covert said.

The cancellation didn't come as much of a surprise to Jeff Peterson, who founded The Lazer's local music show in 1995. Peterson left the station in 1999 when it changed formats to Top 40.

"It's just another example of how The Lazer continues to make all the wrong moves," said Peterson, who now DJs for Topeka's V-100 and serves as operations director for six Cumulus Media stations in Topeka.

"I was surprised to see it last so long ... I would imagine that they kind of wanted to cancel it all along because it really didn't fit what they were doing."

Peterson said The Lazer's local music show was probably not as popular anymore as it was during his stint from 1995-1999.

"I don't know that the local music scenesters were using that outlet anymore, with the rest of the programming being so hard to listen to," he said.

But Colby Blanton, a Topeka resident who has co-hosted the show since 2001, said the show had a loyal listener base.

"Lawrence has always been known for its great local music and that's why people always tuned in," he said. "A lot of people are kind of pissed that it's gone."

Blanton encouraged the show's listeners to e-mail the station to show their support.

"The goal is to get people to realize that there is good music in the area," she said. "I probably go to 6-7 shows a week just finding bands and talking to people and getting CDs."

Homegrown Buzz was actually the brainchild of Stash, a former Buzz DJ who is now music director for The Planet KZPL-FM 97.3.

Though The Planet recently added Kansas City band Abileen to rotation, it has not yet established an all-local program.

"It's something we are hoping to do in the very near future," Stash said.

According to Stash, most corporate stations shy away from all-local programs because they fear they will get bad ratings. The Planet has the advantage of being privately owned, meaning it can take more risks with its programming.

Another factor that can make all-local shows unrealistic is the low production quality of local music, Stash said.

"It's expensive to record," he said. "You're taking an even bigger risk by playing stuff that sounds local."

According to Stash, however, that may be a risk worth taking

"We have to change the way we do things and I don't believe that just playing the hits is going to cover that anymore. Especially with Satellite Radio, the only advantage that terrestrial radio has is being able to do something unique to here, and one of those things would be local music."

Perhaps the Vikings of Lawrence will take heed.

Being how fast this article was put together, i thought it was good. I wished they would of talked to some local bands though about there reaction to it. I mean the buzz's local show has improved, but as far as i know we (the lazer) were the only station playing songs from the mid 90's. Like frogpond, outhouse, paw, danger bob, etc. Anyways, im out of the job now. So if anyone has a use for a local music radio dj, give me an e-mail haha.

Why doesn't "resident expert" Stash put his money where his lame mouth is?

Why are YOU asking HIM about local music when his station doesn't support us (local artists)?

Quit giving love to a station (The Planet) and it's awful lack of local programming.

Go back and do some research Richard.

I thought the article was pretty good. At least the lazer.com web site had a link to it - and you know it's not exactly kind to the old station . . .

But yeah - you know that in the 90's the lazer was on all the radios in all the shops allover town and you heard it in the cars next to you in traffic and it was everywhere all the time.

But somehow, someway, the management FAILED to convert that popularity into revenues. Is that the fault of the music programming?

It's tough to find people who know how to properly sell ANYTHING much less how to be a "sales person" in an industry that HATES salespeople!

Build popularity and then find sales reps who know who to sell the advertising to and how to sell it! Success with an alt-rock format is as as simple as that!