Back in April, I had the pleasure of reviewing Midnight Club 3: DUB Edition for the Xbox. It proved itself to be an incredibly fun, fast-paced, and extremely customizable racing experience. The cities were open-ended, there were tons of cars to choose from, and the gameplay rivaled the breakneck racing of Burnout 3 in terms of sheer fun factor. I'll be focusing on the differences between the two versions in this review. For a detailed explanation of gameplay mechanics, modes, and other information about the general game layout, please refer to my original review (Click for review).

With the PSP version of MC3, Rockstar has succeeded on some levels. It seems that very little has been left out from the games' console big brothers. The cities are just as big, there are just as many cars, and the extensive soundtrack is still intact. There's one problem, though and it's a huge one. Midnight Club 3 for the PSP is one of the only games I've ever played that has had the entire gameplay experience ruined because of the usually small issue of load times.

Ridiculous doesn't seem like an appropriate enough term to describe the length of these load times. Pretty much any racing game on the market has a Car Select screen, right? Well, so does Midnight Club 3. The only problem is, it takes TWENTY SECONDS just to look at another car. Read that sentence again, and think about how long that is, especially considering that all you're trying to do is look at another car. Twenty seconds would be a considerable load going into a race, the fact that it takes that long to scroll to the next vehicle is utterly unacceptable. If that wasn't enough, the pre-race load is even more awful, generally clocking in at almost a minute and a half. Considering a lot of races don't even take that long, it's fair to say that you're waiting for the game to load more than you play it. 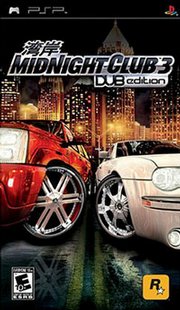 Load times notwithstanding, Rockstar has actually fit everything from the console versions onto the PSP. Sure, the graphics are a little jagged every now and then, and the "slip stream turbo" effect isn't as sharp, but it's not a huge difference by any means.

The PSP version of MC3 is virtually identical to the console version in almost every way, except for the load times and slight graphical differences. Just because it mimics the console version well doesn't immediately make it of equal quality. Sacrifices could have been made to ensure the load times wouldn't be as crippling. One of the three cities could have been taken out, some lighting effects could have been toned down, the unnecessary FMVs wouldn't be missed. The list could go on and on. I believe that any gamer would accept some omissions in order to ensure that the game is playable. In its current form, MC3 is a horrible game as far as portability is concerned. In no way does it support "pick up and play" gaming, and there is absolutely no excuse for the load times. Avoid at all costs (and pick up the console version if you haven't yet).