Updates and maps that inarguably enhance the experience

A few weeks after November 9, 2004, it became painfully apparent to Halo aficionados that their Halo 2 multiplayer game seemed one-dimensional. Aside from the two sniping weapons, it wasn't about aiming and skill as much as it was who could squeeze the trigger first while dual wielding. Fun, for the most part, had as much depth as a game of slapjack. Single wielding a dual-wielded weapon was futile. Grenades had a paltry effect and a tiny radius. Melees were feeble. The 12 maps that shipped with the game, although prettier and seemingly more intricate, weren't as versatile as their predecessors. But now, Halo 2 takes a giant step (back) toward the greatness and identity that made the series a household name with the Multiplayer Map Pack.

The disc contains all of the fixes and changes made in the downloadable 1.1 update that Live users have enjoyed for a couple months already. Grenades are worth using and are a key component of combat again, melees are stronger, dual wielding is slightly less accurate and single wielding is slightly more powerful. Add a pinch of tweaks to the Brute Shot and tighter pattern for the Battle Rifle and now Halo 2 regains so many of the layers it lost. Now there are several types of encounters possible. You are no longer helpless when someone charges at you with a dual combo. Make them walk into grenades. The plasma grenade is an instant kill if an enemy is standing right beside it. Frag grenades destroy shields in a close blast, reducing the enemy to a one head shot kill. Try side stepping an attacker for two melees for a kill (or one to the back, of course). The possibilities for worming your way out of a tough spot have increased exponentially. If anything, the more powerful grenades and tighter Battle Rifle pattern have almost closed the chasm between long and close range combat. Playing one night on Xbox Live will show you how much more medium range combat exists because of these changes. 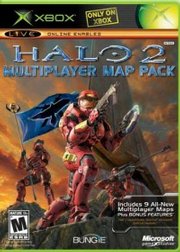 Said changes might be overshadowed by the nine new maps, but let me assure you they'll impact your game just as much.

Halo 2 saw the advent of many more linear, asymmetrical maps. Maps like Zanzibar, Ascension, Ivory Tower, Headlong, and Burial Mounds were fun for the gametypes the designers had in mind, but did not display the versatility fans had come to expect. This made the enjoyment of each map limited, making the 12 maps feel much smaller. It's commendable for designers wanting to make the maps feel like genuine locales, but it should never take a backseat to fun. Sure, maps like Hang 'em High and Damnation weren't purely symmetrical either, but neither team felt disadvantaged on a multi flag or team-spawning situation. Bungie tried so hard to get players to adopt the new gametypes that map design was somewhat stilted.

That has all but changed. Bungie felt the above notions loud and clear. Aside from Relic, a map fun on only one gametype that pours gameplay through a thin funnel, most of the new maps provide a much more versatile battleground.

Warlock is a remake of Wizard from Halo 1. The main changes are aesthetic, tailoring the geometry to fit Master Chief's new jump height. The four sides are more distinguishable with subtle color coding. The central structure now has a bottom pass-way as well. Warlock is small and is instantly enjoyable on every gametype, helping the need for more small maps.

Relic and Backwash leave a little to be desired, lacking the inspiration found in the other seven. Relic is a huge island with a central structure designed mostly for one-flag . There are plenty of rocks and obstructions to find cover behind on your way to get the flag off the main structure. Once up there, it's a narrow walk to the flag, which can immediately be thrown off toward the flag score. From there it's off to the races in a heated firefight to keep tossing the flag home. To make things easier on the offense, there is a two-way teleport that can be activated that makes the trip to the main base much quicker. Although it plays much more to the advantage of the defense once the flag is thrown off. The teleport puts the defense in a perfect position to keep the offense from scoring. This map flows well for one gametype only. Team slayer is an absolute spawn camping festival since most of the spawns are near the shore. It's too big for Oddball or King.

Backwash is the P.S. of the map pack. "P.S. If you need a break from the other small maps, play this for something different." Backwash's main attraction is aesthetic. It has the swampy, foggy atmosphere of the 343 Guilty Spark level from Halo 1. There is even Delta Halo's monitor floating around for added effect. The artists did a great job sprucing up a rather rudimentary design job: a small oval with bunker bases and a central multi-level building. While it is cool to not be able to see your enemies until they're up close and while it does add another small map, it's pretty ho-hum.

Steve Cotton designed Containment and Sanctuary, the single best Halo 2 map. Containment started out as a conversion of Halo PC's greenish Timberland, then went through change after change until it was an entirely different wintry monster. And I say monster because it's huge. It's arguably too big for a 16 player limit since most of the great moment designs will get lost due to too little action. Still, this vehicle heavy, intricate base design map will become the new Blood Gulch. Tons of risky open space in the center with multiple tunnels on the sides and an open flag area makes Containment a blank canvas for rewarding teamwork.

Sanctuary looks ripped from the Delta Halo level and is the most versatile, fun and focused map in all of Halo 2. King is fun. Oddball is whimsical. Slayer is awesome. Juggernaut is a thrill. CTF and Assault thrive. Territories is:Territories. Sanctuary lets every game variant live its life to the full. From 1v1 Slayer to 8v8 Assault, it can all work. The sides are symmetrical but do have identity. One side is noticeably marshier than the other. But each flag housing has several ways to be attacked. There are well thought out rocks and obstructions for cover and team-oriented gamers will have, again, a blank canvas on which to paint. No one is ever at a disadvantage with regard to spawn or team side and there are enough little nooks and crannies to keep gameplay fresh.

Terminal avoids the one-dimensional asymmetry pitfall by making this map full of ledges, tucked away rooms, several clear paths and adding a train of death. "What is this train of death" you say? Well, it's a train:a fast train that creates instant death. There are two tracks in which the train zooms back and forth, making it risky to get items such as the overshield and the sword. It creates one of the most unique elements found in any Halo map and proves to be a factor rather than a gimmick. The map itself is fairly large like Headlong, though not as tall. It's designed for one-flag, one-bomb type games since the heavy vehicles spawn at one base. It's too bad this is default, since it would actually make a great multi-flag map, too. Regardless, the map has tons of versatility and regular King of the Hill is a blast since the hill is on the tracks. Not only are you keeping enemy teams at bay, but you're constantly avoiding the oncoming train. Very good times.

Turf, Gemini and Elongation, the remake of Longest round out the pack. Elongation is my personal second favorite for its unheralded balance, several ways to an objective and overall versatile playability that makes a Halo multiplayer map a Halo multiplayer map. There have been many aesthetic changes for the better, just like all of the new maps. Conveyor belts have been added that carry crates up and down the two main hallways. If you merely stand on the belt, you won't be picked up by the motion detector, which is a stealthy way to get from one end to the other undetected. Bungie didn't plan on this element, but turns out to be one of those beautiful mistakes, like grenade jumping and thrown-together vehicle physics that we all sorely miss from Halo 1.

Turf is a claustrophobic design of perpendicular alleys that zig zag to the opposite corner. There are two main vertical dimensions at any given point on the map, making it awesome for all gametypes. Tyson Green seems to have this "friendly for all gametypes" approach to his maps, and I can't say enough about this consistency. Halo 2 needed it.

Finally, Gemini is a remake of an old Marathon map, but with much more developed sense of the vertical axis, obviously. Bashed by critics as the "boring" map of the pack, I couldn't disagree more. This Covenant-inspired arena has all the trimmings of a great slayer map and all the trappings for any objective game. Cover, hallways, outdoor edges, teleports all have great connectivity and there are no unnecessary bottlenecks.

There are a couple of bonuses on the disc. A mini-documentary about the new maps that's pretty engaging. An animated short, using the game engine, which shows you what happens to the marines in the Pelican that gets shot down at the beginning of the Outskirts level. It's encouraging to see that the Elites don't speak any English in this short, hopefully foreshadowing a return to the mysterious nature of the Covenant for Halo 3. (God knows how that would actually happen, given the races that take sides by the end of the game, however.) There is also a funny audio test and the 2000 E3 demo of the original Halo, which is incredibly amusing.

Overall, the updates and maps are more than welcome to the Halo 2 universe. Not only were they desperately needed, but they refine most of the rough edges of Halo 2, making the game much more complete. Buying this pack for $19.99 at the store or downloading them for $11.99 via XBL (minus the mini-documentary and animated short) is an absolute no-brainer. There are some of you who haven't picked up Halo 2 in months. You owe it to yourself to dust it off and start playing again.

Amen! The Gamer speaketh the truth!

No, 4 of the 9 maps are currently free on XBL. The rest will be free at the end of August. The price is for people who want em now and people who don't have XBL.