It's shocking just how many Lawrence residents are quick to offer that self-description.

There are more fans of the young wizard in town than you can shake a stick at - er, make that a wand.

And they're not just children - not by a long shot.

"We've sold to kids as young as 4 and 5, and I quite often see college students coming in and buying them for themselves. I even got my folks, who are in their 70s, into Harry Potter, and they're loving it."

In fact, millions of enthusiasts worldwide devour each new book in the Harry Potter series as fast as British author J.K. Rowling can write them.

The first book, "Harry Potter and the Sorcerer's Stone," came out in 1998. Rowling has said she'll write a total of seven in the series.

The clamor is increasing this week, as the countdown to the release of the sixth and latest book, "Harry Potter and the Half-Blood Prince," (672 pages, $29.99) nears its end. 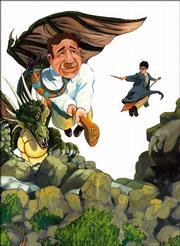 Many bookstores, including several in Lawrence, will play host to midnight release parties Saturday, where fans can snap up their long-awaited copies of the new book at the earliest possible moment. Weaver will be among them.

"That's what we'll be doing Saturday and Sunday - fighting over the book. But that's part of the fun: the fight to see who gets it."

There are plenty of people like Weaver in Lawrence, readers of all ages, who can't get enough of Harry Potter.

Like Amanda Berg, 22, a fifth-year Kansas University senior from Minneapolis, Minn. She read her first Harry Potter book when she was about 14.

She reserved her copy of "Half-Blood Prince" eight months ago.

"I'm always excited to find a book that I can't put down, and that's exactly what these are. I'm an education major, and I have a lot of exposure to children's books, and these are very well-written," Berg says.

Amanda Berg is looking forward to the release of the new Harry Potter book. Berg, who works at the Oread Bookstore, said she became a fan as soon as she read her first one in the series.

"I think it's the style of writing. It appeals to adults, while also appealing to kids. There's a lot there, a lot of hidden humor, references to other literature, mythology and that kind of thing."

Berg, a part-time clerk at Oread Books, in the Kansas Union, will claim her copy of the new book at the store's midnight release party Saturday, held jointly with Student Union Activities.

Ruth Lichtwardt, an assistant buyer for Oread Books, buys all the children's books for the store, including the Harry Potter series.

"Some people came to Harry Potter as adults. I know a lot of them, myself included. It's fun, and it's very clever. It's a series that doesn't talk down to its audience at all," says Lichtwardt, 46.

"It's full of all sorts of references and allusions to classical mythology that you recognize. It assumes that you have a lot of culture that you might not realize you have."

Harry Potter books, even the earlier installments of the series, are always in demand at the Lawrence Public Library, 707 Vt.

Children aren't the only ones who can't wait to get their hands on them.

"The books never stop circulating; all the previous books keep getting checked out. Adults may be a little more patient - they don't go quite as nuts as the kids the first night (the books become available), but adults are reading them. It's astonishing how much they circulate," says Maria Butler, the library's community relations coordinator.

One such fan is Camille Lechliter, 58, a technical services clerk at the library.

"I've read them all, several times. Her (Rowling's) writing style just grabs you and keeps you going. The characters are so real, so believable, you could meet them on the street and you'd know them," she says.

She turned her husband on to Harry Potter, and she's ordered two copies of the latest book, one for each of them.

Josh Robison came to the Harry Potter craze a little later than most enthusiasts, but now he's hooked.

"I actually was sort of a later bloomer. I really got into it after I saw the first movie, 'Harry Potter and the Sorcerer's Stone.' I avoided Harry Potter for a long time - too much hype. When I finally did see the movie, I loved it," says Robison, 24.

"There's something empowering about a little kid who started with absolutely nothing and is plunged into this world where he is famous, powerful and important."

Robison, an employee of Sunflower Broadband, which is owned by The World Company, has acquired a few Harry Potter accoutrements: a wand made of holly and a robe. He already wears glasses, like Harry.

When some of his friends had "Star Wars"-themed parties at the recent release of the final movie in that series, Robison went dressed as Harry Potter, just to make a statement.

"I didn't really intend on getting into fights with any Storm Troopers or anything," he says. "Everybody I know is a huge 'Star Wars' fan, and I'm not really into that. So I went to the movie and the parties, but I wanted to geek out in my own way."