Leaving the nest and embarking on a parent-free life means freedom.

A whole new world of possibilities opens up - getting smashed every night, sleeping with your boyfriend, getting a lower back tattoo or nose piercing...

For Kathy Piller freedom is a Slip 'n' Slide.

The Lawrence native's parents never let her have one, so she longed for that Wham-O brand 16 ft. yellow plastic sheet.

Once she left home for college, though, Piller, not only got her dream, she made it a reality for other KU students, too.

"We were all kind of deprived," says Piller, club treasurer. "It seemed fun to start a club surrounding something you weren't allowed to do as a kid."

Formed in spring 2004, the club was quickly recognized as an official student organization, receiving student senate dollars to get all the Slip 'n' Slides $431 could buy. The group had several "meetings" last spring, rolling out their 10 Slip 'n' Slides. 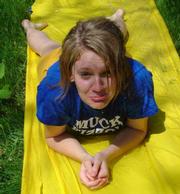 As president, McConnell chose to put the club on hiatus when Piller and Newman, vice president, left to spend the past school year at University of Oxford.

"It's a bit cold in Oxford for Slip 'n' Sliding," says Piller. "They thought it was kind of silly. They didn't really know exactly what it was."

The girls have returned stateside and along with secretary Tommy Bobo are ready for a whole year of Slip 'n' Slide fun. Because of school rules that involve keeping the grass intact and a "dry campus," club events are all held off campus.

"It's a dry campus and we have technically a no alcohol policy," says McConnell. "But, I mean, it's Slip 'n' Sliding and it's fun times."

Finding the perfect place to Slip 'n' Slide is vital; McConnell says it's best to lay the slide on thick grass, but the grass can be ruined by the water. Without careful attention to rocks or hard ground, it could turn into the Slip 'n' Bleed. Because Wham-O warns against anyone older than 12, more than 110 pounds or taller than 5 feet, using the slides, all Slip 'n' Slide participants are required to sign a waiver.

"Liability is a huge deal," says Piller. "We make sure people aren't stupid. By having the waivers, it's like saying, 'Be responsible or you could really get hurt.'"

A glimpse of freedom.

Despite advisories, some are more daring. Slip 'n' Sliders sometimes strip down to race in the buff (which isn't endorsed officially by the club). Bobo plans on setting the world record for longest Slip 'n' Slide venture ever with a 300 ft. slide. Originally, he had planned on constructing a slide down Campanile Hill, but was foiled due to insurance issues.

"Unfortunately, since we go to school in Kansas, that's the only hill around," says McConnell. "There aren't a whole lot of options to put it anywhere else. We're trying to figure out if we can go somewhere and do it because Tommy was really hell-bent on breaking the record."

For info on joining KU Slip 'n' Slide email president Libby McConnell at libby320@ku.edu or check out their site

The club expects several hundred members to frequent their events in the next two semesters, most coming to the club based on word-of-mouth.

"People E-mail me at least once a week and are like, 'I want to join your club,'" says McConnell. "We're all about good people, good times and free Slip 'n' Slide love."

your slip n' slide sucks balls. tomorrow ur record is going down at six o clock. 380 feet bitches. definitely getting a representitive from guinness to come out later this summer. the new record holders "echsslipnsliders" remember bitches.