Abra Bron has the whole working thing figured out.

Though boredom can set in while doing research work up on campus, the 22-year-old KU grad knows how to revive herself.

Sneaking off from work several times a week, she usually hits up apartment complex pools for a few hours. Today, she's at Lawrence's Outdoor Aquatic Center.

"This pool has a different atmosphere. Other pools are strictly sun-bathers. Here, you can watch the kids."

After purchasing a $16 month-long pass. Bron runs into friends Sarah Noulles, 21, and Annette Schieber, 22. The trio finds a spot convenient to the diving boards and brand new yellow slide. Lifeguards blow whistles from under their umbrellas at kids sprinting from the high dive to the low dive to the slides.

"That's the reason I come - the high dive and slides," says Noulles, who ventures to the Aquatic Center three times a week. "[The kids] always want you to watch them and see what they're going to do next." 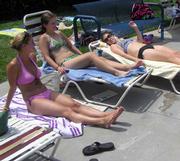 From L to R, Sarah Noulles, Annette Schieber, and Abra Bron like kid-watching at the Lawrence Aquatic Center.

"I like coming here because it's like kids' freedom," says Johnetta Franklin, 11, who takes her little brother to the pool most days. "We just come here and enjoy what we're doing."

Since moving to Lawrence last month from Louisville, Ken. the King family - from left: Christina, 6, Mary,8, and John, 10 - have come to the pool with mom Leslie most every day. 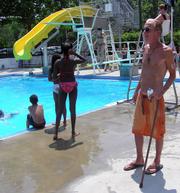 "I always said I'd never go to the city pool again because little kids pee in it," says Larry Holmes, 56. But there he is...

Larry Holmes, 56, has been going to pools for 54 years. He's traveled plenty - both growing up and as a retiree - going to pools in places like Belize and Western Europe. Though Holmes now has his own pool at his home in Arkansas, he spends half of his time in Lawrence at his fiancee's home.

Growing up in an Army family, the last time Holmes went to the community pool was in Chateauroux in southern France as a 14-year-old boy. He says that in comparison to the pools in France, Lawrence's pool is larger and has more restrictions. Drinking and smoking at the pool in France was commonplace, as well.

Kevin Lytle, 10, practices new tricks off the diving board regularly. So far, he's mastered the front flip, back flip and an aerial. He comes to the Aquatic Center almost everyday with sister Johnetta Franklin, 11.

Franklin likes to swim and hang out with friends while Lytle dives or plays basketball.

Easily the smallest of the water basketball players, Lytle is just coming out from a game of "21," where there are no teams, but the first person to get to 21 points wins.

Both agree that the slides are scary - Franklin doesn't like how high the yellow slide is from the ground. Lytle is afraid of going "way down" into the water.

Franklin goes to the pool because she "can do whatever." She can swim and take breaks when she wants, while the lifeguards keep her safe, she says.

"I like coming here because it's like kids' freedom," says Franklin. "We just come here and enjoy what we're doing."