Hopping back in time

More than 2,000 Young Republicans were cheering for the members of Tree Frog.

But before they could strum a note, they had to allow the Secret Service to take position.

"The thing I remember most is seeing all these guys in dark suits - very stern-looking Secret Service guys - standing in front of the stage," says Lynn Piller, steel guitarist of Tree Frog. "They were like a human wall. ... It was an intimidating presence."

It was 1976, and Lawrence's Tree Frog had earned the gig as house band at the Republican National Convention in Kansas City. The masses were celebrating the nomination of incumbent Gerald Ford.

"We played for an hour or so, and then Tony Orlando came out and we backed him up without any rehearsal," recalls Eric Elder, Tree Frog guitarist. "We played a 15-minute version of 'Kansas City.' He was vamping all these lyrics that had to do with Republicans and Gerald Ford being in Kansas City. Then Betty Ford came out, and she and Tony Orlando were doing the bump onstage."

A couple of nights later the country-rock act performed at another convention show with Sonny Bono. Only Bono became a little microphone-shy without Cher at his side.

"We did 'Twist and Shout' with me singing lead," Elder says. "Sonny Bono was standing next to the bass player, Jim (Fey). But every time he put his hand on Jim's shoulder, something wasn't grounded and it would shock Jim."

While the Republicans continue to hold their annual gathering every four years, Tree Frog throws a similar get-together every two years.

Tree Frog broke up in the late '70s, but each alternating year since 1987 finds the five musicians assembling in Kansas, rehearsing for a few days, then staging a reunion concert. The functions usually take place in the band's hometown of Lawrence, as with Saturday's event at Liberty Hall, 642 Mass.

"When we play, most of the people who come to see us are our old friends who used to be at those old shows," says Piller, the only member to still live in Lawrence.

"The group is most of the same people we used to play for. But I would say the band is better now than it was then. Like many things, as you get older and more experienced, you get better at what you do."

"They're great individual talents, and they're able to put it back together on short notice every other year," says Tom Gleason, a local attorney who has been a fan since the '70s.

"Their show is as much fun for the social event as it is for the music. It's a lot like a high school reunion. If you keep asking the question, 'Whatever happened to so-and-so?,' chances are so-and-so will show up at the Tree Frog reunion."

Checkered past
Tree Frog first hatched in 1969 when a few childhood friends from Wichita formed a band after joining a Kansas University fraternity.

They took the name from a Zap Comics character named the Checkered Demon, who always chugged Tree Frog beer.

The five-piece act started primarily as a cover band but then began to develop a distinctive sound that fit in with other country-influenced acts - such as The Eagles and Pure Prairie League - that thrived on FM radio during the mid-'70s.

"Our harmony was the most outstanding thing. Everybody in the band is competent musically, but it wasn't like you came to hear us for the fastest guitar player," Elder says.

The core membership of Elder, Piller, Fey and violinist/guitarist Scott Piper was solidified when drummer Gary Durrett (formerly of The Blue Things) happened upon the outfit performing at the old Mad Hatter bar and was promptly recruited to join.

"All of our cover songs are really good and we do them well, but one of the things we were trying to do back then was play original material," Durrett says. "At one point we played about 75 percent original material, which on the one hand is kind of impressive, except that a good 90 percent of the gigs we had to do to survive were in western Kansas. They couldn't care less. They also didn't want to hear The Eagles. They wanted to hear Bad Company and Led Zeppelin."

Fortunately, Tree Frog's sound and consistent work ethic caught the ear of several industry figures. In 1973 they cut a demo in Nashville, only to have producer Bob Milsap insist on hiring session players to replace the musicians on the recording.

Listen to our podcast with Lynn Piller. This half-hour interview follows the story of the local band from their first recording experience in Nashville to their cantankerous clash with the disco era, interspersed with songs from the band's 1980 album "Better Late Than Never."Get podcast or mp3.

"He was impressed by our vocals and the songs," Elder says of Milsap. "Maybe it was a time thing or maybe they just wanted that smooth Nashville sound. But I don't like that recording as well because it sounds too homogenized."

Lawrence legacy
Despite making a steady living with the group and building a regional following, the members were unable to take it to the next level.

"We never did get signed," says Durrett. "It was one of those things where we thought the ultimate was to get signed. But, of course, today you realize that all you did was get a bank loan."

"We'd been on the road for years," he explains. "In my own journey, I had to do something different. I quit and went to Hawaii for a couple months to climb mountains. I went to Colorado and Tennessee after that and never ended up back in Kansas." 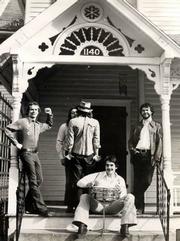 When their respective careers in music subsided, Piller headed back to Lawrence and became owner of Richard's Music Co., 716 1/2 Mass. Fey stayed in Nashville, Elder moved to Austin. Durrett went to Glendale, Calif. And Piper returned to Wichita.

Tree Frog never scored a record deal, never went on tour with a major headliner and never performed outside the United States. Only posthumously did the unit release a compilation of its demos and studio tracks, "Better Late Than Never."

And yet 25 years later, the group is still actively reveling in its legacy - something few of its more "successful" contemporaries can claim.

"Our fan base - especially in Lawrence - really liked the fact that we were pretty much an original act," Durrett says. "So we're going back into the war chest and getting some of the old CDs out to work up about a half-dozen originals that we haven't done in 30 years."

What's a Crumpleton?? Someone who provides a fine evening of (in my case) music from my junior high and high school music!
... and a strong branch on the musical family tree of frogs...