The N machine gets a wildly original and graphic title

Most any console game on the market can inevitably be compared to at least one other game. For instance, I loved God of War, but I was immediately reminded of Devil May Cry, Prince of Persia and the Zelda series when I played it. Killer 7 is not one of those games. The puzzles are somewhat reminiscent of past Capcom games, but the similarities end there. Killer 7 is bar none the most stylistic and bizarre game I've ever played.

While titles like Katamari Damacy, Incredible Crisis or Gitaroo Man may scream loony Japanese eccentricity, Killer 7 oozes pure style. Within minutes of pressing the power button, you start to realize the level of insanity you're about to experience. You're immediately introduced to a super-sleek graphical style, crazy cutscenes and some thick atmosphere. Early on, you'll run into the eternally pessimistic Iwazuru, a spectre who resembles the gimp from Pulp Fiction (although slightly more festive). Iwazuru is present for most of the game, giving you sometimes helpful, sometimes cryptic advice as you progress. He also acts as a general encyclopedia of the game mechanics, and I spent a good 15 minutes or so listening to what he had to say before I even started playing the game. Since I hadn't yet experienced the gameplay, I became extremely confused while listening to him explain it to me. I have to extract blood from invisible laughing monsters, then give this blood to a doctor in a television set? What? 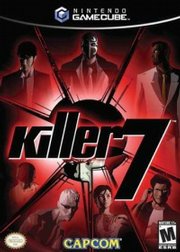 Everything he explained slowly started to make sense to me when I actually started playing. The enemies are called Heaven Smiles, and they're normally invisible, but a quick scan with the L button will reveal them. At this point, you can either blow them away haphazardly, or you can take the smarter approach and aim for a section of gold particles floating somewhere within them. If you hit this area, they immediately disappear, and you absorb their blood.

There are two types of blood (thin and thick), and each is useful in its own way. Thin blood is used to fill health vials, and can also be used to charge shots and activate special character abilities. You'll use it to turn invisible, paint walls with blood, run fast and jump large obstacles. Thick blood is more useful, as you can use it to upgrade each of your seven characters' abilities, as well as pay off a spectre to give you puzzle hints.

Controlling your character is a bit odd, as you don't have free analog movement. Rather, you move forward by pressing A, and change direction with B. It's not entirely linear, as you'll reach forks in the road, at which point you can choose which direction to proceed. Imagine Resident Evil levels, but a a simple forward/backward track. There is a large variety of Heaven Smiles, but the simple "run into the next room, switch to first person, shoot, run" gameplay gets a little stale. Puzzles are of the standard Capcom variety, which means you'll have to find a bunch of keys, look at a bunch of pictures on the walls, and participate in some goofy sidegames like predicting the outcome of a horse race.

As I mentioned earlier, there's seven core "characters," but technically it's just one. You can choose any of the seven personas of Harman Smith Garcian, Dan, Kaede, Con, Kevin, Coyote and Mask de Smith. Garcian is the most important, as he is the only one who can revive fallen personalities. For some reason, when a persona dies, they turn into a bloody paper bag, and Garcian must inflate the bag to revive them. Did I mention this game was bizarre? Anyway, this method works better than a strict "number of lives remaining" system, and allows you more control over how you progress through the game. You don't want to use Garcian for standard combat, because it's Game Over if he dies. You'll want to go with one of the other six psychos, and each has strengths and weaknesses.

Dan can charge shots, which comes in very handy against certain enemy types. Kaede has a sniper scope for far-off targets, and she can also destroy certain walls by spraying them with blood. Con is extremely fast and carries two guns that he can fire quicker than anyone else. As an added bonus, he's small and can fit through spaces the others can't. Coyote can jump high and pick locks, but his gunplay leaves a bit to be desired. Mask de Smith is the brute of the group, and carries double grenade launchers (useful for knocking down cracked walls and dispatching certain enemies). I found Kevin to be the best character for standard combat. He throws knives with an extremely steady hand and never has to reload. Extracting blood is a big part of the gameplay, and Kevin is certainly the best at it. At certain points in the game, you'll actually play as Harman himself. He's an old man in a wheelchair who wields a huge sniper rifle, and he's the central part of the complex story.

The story is simultaneously one of the strongest and one of the weakest points of the game. Harman and his personalities are extremely intriguing, much moreso than the plot itself. The Killer 7 jet around to extremely different locales (a small Texas town, a Japanese restaurant, office buildings), but the reasons why are fairly vague. Sure, it's cool to fight a cult leader with an afro in one chapter, followed shortly by fighting a group of Power Rangers knockoffs, but it's not clear how this all ties into the main storyline. This main storyline is a confusing mess of international relations and terrorism involving the United States and Japan. Odd subplots are abound, involving children in a carnival, the Liberal Party, and exploding nuclear bombs in the atmosphere. Killer 7's story is all over the map, and that's not necessarily a good thing. It would have been much better if the focus was more squarely on Harman and the 7.

Style is easily Killer 7's greatest weapon, and there's no shortage of jaw-dropping moments throughout the game. A lot of this lies in the little things, like the different ways characters change directions (Dan may do a simple turn, while Kevin does an impressive back handstand/flip). Many of these moments lie in the cutscenes. At one point, a character is faced with a speeding bullet heading towards his head, and he dodges it by ... headbutting the bullet. You've got to have pretty high action standards if you don't find that insanely cool.

The graphics play a huge part in the style of Killer 7. Some of the levels are absolutely gorgeous, such as when you first walk into the Texas area. There are segments in the rain, in brightly-lit carnivals, and in churches that look more vivid and amazing than most anything ever seen on a console. Now, I'm not talking about great graphics in the same way that I'd talk about something like Resident Evil 4. Killer 7's great graphics are brought about because of visual style, not texture quality or polygons. Every little aspect of the game is fully realized in the visual sense. Something as simple as changing your persona becomes a visual treat when you see the color wash out of the screen, followed by your character bursting into a million blood particles. The audio complements the visuals perfectly. If you're low on life and entering a new area, the distinct laughter of the Heaven Smiles can be truly chilling. Music isn't always present, but is always appropriate when it is. I'd like to note that the music track in the Vindiculum Gate area has quickly become one of my favorite videogame tunes in recent memory.

It's important to note that Killer 7 definitely earns its "M" rating. It rivals GTA: San Andreas in terms of liberal use of the F-word, and is far more violent. Blood pours out of every inch of enemies' bodies, innocent people get shot directly in the face, and there's even a couple sexually explicit scenes. The amount of adult material in this game is truly off the charts, and I'm glad to see Capcom has the guts to bring something this mature over to the States.

When you first begin Killer 7, you feel like a little kid being introduced to a whole new world. It seems like there's something exciting and new around every corner and inside every door. As you progress, however, you start to get accustomed to this theater of the bizarre. You become more familiar with the tricks this game has up its sleeves, and some of the luster is therefore lost. Regardless, Killer 7 is a game that will be absolutely loved by some, and hated by many. While it's certainly not for mainstream audiences, fans of the bizarre and ultraviolent will surely embrace it.