Still improving, still the best college pigskin title...and the only one.

The summer is halfway over, and even though that's bad news for students, it's great news for gamers. This means that the dearth of new releases is almost over and the wave of fall and holiday titles is just over the horizon. To mark the end of the "summer video game drought," EA has released its newest college football game, NCAA Football '06.

I would find it safe to say that last year was not the series' best year. There were many problems as it seemed Tiburon, the developers of not only NCAA but Madden as well, had gotten lazy. Actually, only one element of the game was faulty and that was the AI. This in turn affected other areas of the gameplay. Instead of making the AI smarter, Tiburon went ahead and made the computer's squad super athletes. The leaps and dives I saw some of those virtual athletes make were astounding. However, it's a cheap way to make a game harder. Not only that, but the receiver drop rate was ridiculous. Mike Williams, who was a 99 overall, would have around six drops per game. Tiburon received a lot of heat because of last year's version, and they made sure they didn't repeat the same mistakes. 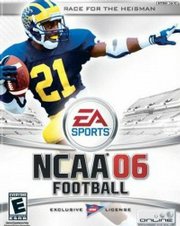 This year NCAA '06 has not only expanded on the features of the game, but the developers went through last year's engine and redefined it. Now the computer IS smarter and not just incredibly athletic. Your receivers will catch and drop passes at a realistic rate. I noticed that the computer would even try to setup play action passes by running the ball multiple times, or the offense would audible if they read my coverage and attack its weak point. The game is also much faster, which was another problem in last year's version. Now when you press the sprint button, you actually feel your player accelerate. This feeling is the best when you cut up field and accelerate. You feel the momentum of the player as you run down hill toward the sideline and then the change of direction as you decide to cut it up.

Added this year are impact players. Each team has a total of three players who are considered the impact players for the team. These players will have the ability to get "in the zone" during games. A white circle surrounds these impact players throughout the game to identify them, and when the circle begins to pulsate, that's when you know he needs to get the ball. Pulsating impact players have improved stats for that play. When these features and improvements are put next to the coveted Home Field Advantage and Matchup Stick, it makes NCAA Football the most realistic college football game ever in terms of gameplay.

NCAA '06 has also added some features that were found in Madden last year. The main one is the addition of the hit stick. I was a bit disappointed at how unintuitive using it was. It seemed to be much harder to get a clean hit stick off in NCAA '06 than it did in last year's Madden. Nonetheless the feature is there, and when you do get the hit stick off it's very pleasing. Packages are now added too. I found this extremely helpful as now you can move your skilled offensive players all over the field. Take USC for example: Reggie Bush is not found in the backfield on every play he is in. Bush is probably lined up at wideout or the slot receiver just as many times as he is in the backfield. This expands on your options on each play and lets you recreate the strategies of that team.

The biggest addition to this year's game goes to Race for the Heisman mode. This mode lets you live the life of a high school player trying to make it in the college ranks. It's a great mode and gives the game a complete second addiction next to its dynasty mode. You start out at a high school workout where a coach explains how hard it is to play in college and that you'll need to impress the coaches. From there you decide which position you'll play and you run drills, similar to the mini-games found in Madden. You'll be given a score on your performance and from this score you'll receive different scholarship offers from different schools. After choosing which school you'll grace with yourself, you move into your dorm room where you can check for fan mail, read the school newsletter or check your trophy case for awards. As you progress through the years at college, the ultimate goal is to win the Heisman and make it into the pros. If you do end up being good enough for the NFL, you can import yourself into Madden '06 when it is released. If there's one complaint it's that the drill run for each position need to be balanced. The scrambling quarterback drill is way too easy, whereas the running back drill can be quite difficult.

The dynasty mode is the same except for the recruiting process. The recruiting menus have been revamped so it is easier to keep track of points given out to prospects and other such tedious tasks. The biggest feature to be added is recruiting during the season. You'll be given the chance to recruit players during the season As they follow your team, their interests in your school will rise or drop depending on how you fare in games. I found the feature to be amazing because now each game during the season has a completely new meaning. Recruiting is no longer dependent on just your end-season record and team stats. Now if you were in competition with another team in your conference, then the game you play against them would sway the recruit in a certain direction. It adds more incentive to play each game and not just simulate. It also keeps the season exciting as you experience the highs and lows of the recruiting process.

Technically the game has made leaps. I was blown away at how detailed the game has become. Character models now come with detailed skin, jerseys, faces, etc. Fields now look as if there was actual grass on them, and the sky has been filled with full moons and gorgeous sunsets. The game still has its framerate issues, especially if you play in widescreen mode. I play in widescreen mode all the time and I notice the slowdown on crowded plays. It happens on almost every play. When I did switch it back to 4:3 mode, however, the framerate was fine. It's still disappointing that I can't run the game smoothly on the best viewing mode.

One thing that did irritate me about the game was the removal of the college fight songs during the menus. EA has invaded the NCAA Football series now with its mainstream music of poppy rock that can only be tolerated for so long. It takes away from the college feel. Thank goodness EA thought about traditional college fans such as me and added the option to use the school fight songs. EA essentially lets you live the American Pie college dream or the school spirit college dream.

The commentary is the best of any sports game. The ESPN crew does a great job, and there is even added presentation as you actually see models of Nessler, Herbstreet and Corso. Corso even makes his pick before the game by putting on the mascot's head. The presentation aspect of the studio is a little underachieved; hopefully it will be improved on when the ESPN license comes into use.

This is the best installment in the series so far, and it's very pleasing to see that Tiburon and EA are not going to get lazy with their sports games seeing how there is no more competition when it comes to football simulators. The bottom line is you can live and breathe college football with NCAA Football '06. With online play smoothed out and giving the game a lasting appeal, every fan of the sport should own it. After all, there is no alternative.