As they say in baseball, the "Bad News Bears" team sure looks good on paper.

Billy Bob Thornton is one of America's finest character actors. He proved in "Bad Santa" that he can play an antisocial loser with little problem.

Director Richard Linklater is fresh from his best comedy, "School of Rock," in which he handled an ensemble of preteens with great skill.

All the elements seem to be there, but as Thornton says in the film, "This game is a lot more than about talent."

Linklater's "Bad News Bears" is an inferior but watchable remake of the beloved 1976 comedy of the same name - arguably the best of the losers-to-winners sports flicks. The new version has all the components for success and doesn't tinker too much with the premise or narrative structure.

Even the familiar strains of Bizet's "Carmen" provide a soundtrack to the action. 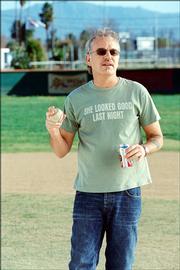 It's pretty much the same movie, minus most of the original's edgy charm.

Thornton portrays the slovenly Morris Buttermaker (a name that completely fits the persona of Walter Matthau in the first film, but somehow seems inappropriate for the grizzled Southerner). An exterminator who once pitched briefly for the Seattle Mariners, Buttermaker is hired to coach a young team of misfits in a summer league. To him it's just a paycheck.

The overmatched team predictably gets mercy-ruled its first outing. But slowly, the manager introduces a series of improvements. First, he adds Amanda (Kraft), the daughter of an ex-girlfriend who has a proverbial flamethrower for an arm. Then he recruits a skate punk (Jeff Davies) with hardball proficiency who agrees to join because of a grudge he holds against the coach of a rival team (an effectively smarmy Kinnear).

As the group gets better and ultimately vies for the championship, Buttermaker begins to care more about winning but loses sight of what the Little League experience should be about.

Don't blame Thornton for the general laziness of "Bad News Bears." He's quite good as the burned-out, aloof manager - the kind of guy who dumps half a can of beer onto the ground so he can mix the other half with scotch. The filmmakers also give him more of a naughty bent (one sweetheart dubs him a "sexy scumbag") than his predecessor.

It's certainly hard to picture Matthau getting away with the line: "Baseball's hard. You can love it but it doesn't always love you back. It's like dating a German chick."

(Interestingly, Thornton actually tried out as a pitcher for the Kansas City Royals in his youth, but a freak onfield accident left him with a broken collarbone before he even stepped on the mound. He ultimately turned to acting.)

"Bears" is like a pitcher who is nibbling at the strike zone. It's always close to hitting the target, but often frustratingly offline. A viewer only has to contrast one scene shared by both films to witness the difference between how setup and timing can result in a comedic gut-buster or a mild chuckle.

In the original, Buttermaker must go on a search to find a sponsor for the team uniforms, only to learn all the premier ones are taken. He finally informs the kids the uniforms are ready, and the scene cuts to opening day where all the teams are gathered. The camera pans over the opposing crews with logos like Pizza Hut and Denny's on their jerseys. Then the shot creeps up from behind the line of Bears where the name Chico's Bail Bonds becomes legible.

In the update, Buttermaker unveils the yellow and white uniforms while the Bears are out for a post-practice meal. A demanding mother (Harden) of one of the players holds up the jersey and complains that she can't believe he would choose such a sponsor. She spins the shirt to reveal "Bo-Peep's Gentleman's Club."

Haven't seen the new Bears yet, I don't believe its going to compare with the original.

Buttermaker, Amanda, Kelly, Lupus, and the rest of the team you just can't compare here. I will always remember the original Bears from my childhood.

Maybe HOLLYWEIRD should start using their brains a bit and think of something new instead of remaking everything.