You don't want to be a truck owner on August 1.

If so, you may be in high demand.

"On July 31, this town changes," says Stefanie Tracy, a fifth-year senior at KU who has learned to keep an eye out for discarded apartment furnishings around this time of year.

"Everyone's crap is out in their yard or in a dumpster ... everyone wants to borrow your truck."

"A lot of us are packrats, as well as kind of spoiled," she explains. "So we take things and then become fickle and get rid of them."

Thanks to on-the-move rental tenants like Tracy, the week-long window surrounding August 1 is a paradise for dumpster divers. It's a ritual that occurs with the regularity of KU football underachieving or underage drinkers racking up MIPs; a ritual that typically involves weird karmic journeys of orange, dome-shaped plastic chairs.

"I left it at the dumpster," Tracy said of a distinct orange chair, "And then I started dating this guy the next year. He had the exact same chair at his house. We all lived in the student ghetto, so I wasn't that surprised." 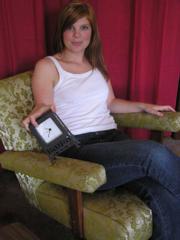 "I don't think it's that great of a clock," said Stefanie Tracy, who scored the clock and chair from dumpster diving. "I needed a bathroom clock is why I've kept that around for so long. The chair I found in between Vermont and Kentucky St. and it's just an awesome chair. Other things I've found were novelty and were only functional for a little while. It's a bit more functional than other furniture I've found, I guess."

Between the lines
Considering the ubiquitous nature of dumpster diving in Lawrence, it may come as a surprise to local scavengers that the practice is illegal.

City code specifies "it shall be unlawful for any person to remove any portion of the contents of any refuse container."

According to the Lawrence Police Department, that definition also extends to items left in the immediate vicinity of a dumpster - basically anything intended for pickup.

The justification for such a prohibition boils down to safety and litter concerns, says Assistant City Manager Dave Corliss.

"It's not what the system is designed for, it's not safe and you're not allowed to do that," Corliss says firmly.

Still, city officials would be kidding themselves if they thought the laws were widely enforced. The city prosecutor's office said there were no records of a citation having been issued.

According to Solid Waste Division Manager Bob Yoos, the issue may be clouded in shades of grey. 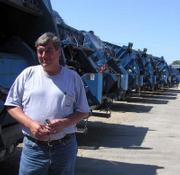 "Our guys will find stuff that's in perfect condition, never removed from the box," said Solid Waste Division Manager Bob Yoos. "Our society may recycle more, but we throw away more. So are we gaining or not?"

"I think if you did a strict interpretation of city statute you could say that there is a statute against going through people's trash," Yoos says. "But I also do believe that when somebody sets a good sofa out on the curb, or a good chest, or a TV that works, or a stereo that's still in the box - and we've seen that - that human nature is that someone's going to want to have that. I won't condemn that because those are useful things."

Yoos' experience, however, has taught him that not all dumpster divers are respectful.

"The concerns we have are when people start ripping open plastic bags and strewing about trash through a yard or through an alley," he says. "It's not fair to the people who have to live around it."

Yoos encourages people to go the extra mile and bring useful items to charitable organizations or set them on the curb with "free" signs. Because the minute Yoos' team shows up, all treasures turn to trash.

"Our guys will find stuff that's in perfect condition, never removed from the box," he says. "(Our society) throws away more every year. We may recycle more, but we throw away more. So are we gaining or not?" 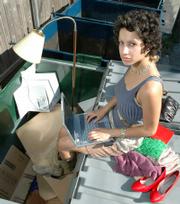 "I just don't like the idea of perfectly good sh*t going to waste," says Manal Kara, a 23-year-old KU student. "If it's going to a landfill, then I don't think there's anything wrong with taking it." Kara goes dumpster diving with her friends every couple weeks - her scores include a fully functioning laptop computer, picture frames, furniture and clothes

Kara goes out with her friends every couple weeks to look for clothes, furniture and other random trinkets. Her treasures include a fully functioning laptop computer, picture frames, furniture items and clothes.

"I just don't like the idea of perfectly good shit going to waste," Kara says. "If it's going to a landfill, then I don't think there's anything wrong with taking it."

Kara refuses to disclose her favorite targets because she fears that media exposure will lead to increased security. She knows that dumpster diving is illegal but she thinks the laws are "ridiculous."

"It's GOING TO BE THROWN AWAY. Do they not understand that?" she raves. "There are plenty of cities where dumpstering is totally legal." 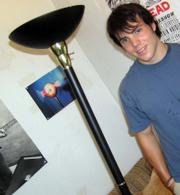 "I got my lamp from a dumpster. It is very crooked, but I just tell people it is post modern," KU sophomore Zach Flanders said.

Kara wouldn't have to scavenge if she didn't want to. She has money saved up from her previous job as a biochemistry lab assistant and she can comfortably afford her apartment and car. Still, it sure doesn't hurt to have a second income selling dumpstered clothes to downtown vendors.

"Rich-people apartments throw away rich-people clothes," she says. "Like, this one time, I found this Express bag full of Gap and American Eagle clothes that were in perfect condition folded up in a bag."

Give 'em the business
Divers like Kara are often unwelcome at the places where scores are most plentiful. The Helping Hand of Goodwill Industries thrift store (31st and Iowa) has a strict "keep out" policy in their dumpster, citing the presence of broken glass and other harmful materials.

One Goodwill employee who wished to remain anonymous said she chases off dumpster divers on a daily basis, including parents who bring their young children into the dumpster.

"It's not right for them to do that when everyone else has to come in and pay," she argues. "It's just like stealing ... God gave you two workable legs, you use them." 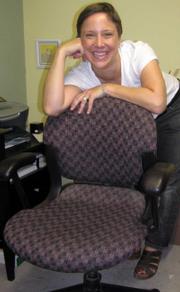 "In a way, people are okay with putting things on the sidewalk or the alley. You'll notice that they just don't throw it out there," said Chris Deman, owner of Crafty & Company. "It's placed out there, knowing that somebody's probably going to come get it."

On the flipside are business owners who scavenge themselves. Crafty & Company owner Chris Deman regularly combs the alleys looking for useful items for her store at 918 Mass. - fake walls, chairs, carpets and whatever else pops up.

"I think it's awesome," Deman says. "There's so many things that you can find out there and redo, especially being a crafty person like I am."

Deman theorizes that dumpster diving is probably more acceptable in Lawrence than it would be in places like Overland Park, where there is less expectation that useful things will be picked up.

"I think the general public knows that there are a lot of dumpster divers in Lawrence," she says. "In a way, people are okay with putting things on the sidewalk or the alley. You'll notice that they just don't throw it out there ... it's placed out there, knowing that somebody's probably going to come get it."

dumpstering is pretty cool, unless you're doing it to be "cool" and since i had psych class with manal, i'm pretty sure i know why she's doing it. it's most likely just another way for her to be pretentious, as she is with her clothes, hair, and standpoints. love, Me.

Glad to see a major part of my lifestyle has been fully co-opted by dipshit hipsters. Seriously, the past two years have yielded SQUAT for me as far as trash-digging goes, and stories like this are big reason why. In fact, after more than a decade of diving in this town, I'm almost ready to retire from the lifestyle, if only because the whole thing has become such a circus that it's not even worth the effort anymore. Thanks, Richard, for expediating the demise of my favorite hobby!

"Kara refuses to disclose her favorite targets because she fears that media exposure will lead to increased security. She knows that dumpster diving is illegal but she thinks the laws are 'ridiculous.'"

I agree, the laws are rididculous. You know what's more ridiculous? The ugly ass skirt-sweater combo she's sporting in that first pic... But seriously, "she fears that media exposire will lead to increased security"? What, like they're going to post armed guards in every alley to keep people from getting free stuff (although the way this commission is trying to "beautify" our town, I wouldn't be surprised...) I think the REAL problem with all the media hype is that it alerts people like HER to the scene, and now all the good dumpsters have been pirated by waterbrianed fashion victims like the ones interivewed in this story.

"It's not right for them to do that when everyone else has to come in and pay," she argues. "It's just like stealing ... God gave you two workable legs, you use them."

Don't even get me started on this ridiculous philosophy. Where does having a job figure in to any of this? I have TWO jobs, lady, but that doesn't change the fact that the Goodwill Store is the most WASTEFUL business in town. Seriously, have you SEEN all the stuff these people throw away? You could furnish an entire tenement building with their refuse. It's frigging OBSCENE! Working televisions, computers, shelves, chairs, clothes, most of it in pretty good shape, all of it thrown away. And she has the nerve to say, "It's not right for them to do that when everyone else has to come in and pay..." If you wanted to make money for it, why did you thorw it away? BOTTOM LINE: When you put something in the garbage, you lose your claim of ownership. If someone else takes it, that does not equal "stealing." Suck it up.

Unfortunately, the King and Queen of the Trash Diggers weren't interivewed for this piece. Someday, I'll post pics of our castle so you can see what REAL dumpster diving looks like. For now, you'll just have to sit tight, cross your fingers, and wait for that magic day to arrive...

i don't think expediating is even a word... but i think these key points are worth repeating.

"I think the REAL problem with all the media hype is that it alerts people like HER to the scene, and now all the good dumpsters have been pirated by waterbrianed fashion victims like the ones interivewed in this story."