"It's about the age-old question: Mary Ann or Ginger?," says Randi Silvers, an Edwardsville native and one of 14 new members of TBS's reality show "The Real Gilligan's Island."

Silvers was selected as one of two women cast for Mary Ann's character on the show. She emphasizes her position was merely to represent the original Mary Ann, with no acting or role-playing involved.

"I've lived in Kansas my whole life," she says. "I grew up going to church camps, I have three younger brothers, and I'm the oldest; those are Mary Ann-like qualities."

But the fact that Silvers is a trained lifeguard and bikini model certainly didn't hurt her chances of being in the competition.

Just like the original series, which was filled with flirtation, skin and sexual tension, "The Real Gilligan's Island" has been set up to capitalize on the appeal of its iconic ladies. While the cliche concept of being stranded on a remote tropical island with someone is perhaps inextricably bound to sexual fantasy ("The Blue Lagoon," anyone?), unlike the original 1960s program, TBS has been more explicit in emphasizing that aspect of the show.

This intention is immediately evident in a staged commercial that has been airing the past few weeks. In it, Mary Ann and Ginger, scantily clad and wielding cream pies, erupt into a catfight that escalates into a wrestling match with an "accidental" double shower finale - all while Gilligan and Skipper watch from hiding. Though tongue-in-cheek, the message of the ad is clear; viewers can even download a director's cut version of the spot intended only for "Mature Audiences."

The cast for this season had nothing to do with the making of the pie fight spot, however, and Silvers isn't bothered by the way the show is being promoted. 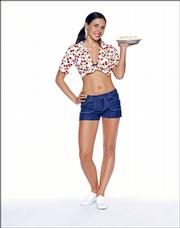 "It's another way to market it to a younger crowd who might not know as much about the 'Gilligan's Island' show," Silvers says.

It was definitely an unusual experience for the Bonner Springs High School Class of 1999 alumna to be whisked away to the exotic island. As the series was being shot, Silvers discovered that life was different when the camera was rolling.

"You gotta take into consideration that the camera is always on you. You're always on camera, and you're always mic'd up, so you can't get away. So if you gotta say something, they're gettin' it. It's funny to think about it when the show is all said and done and there are no cameras."

The publicity for the show promises more "island hook-ups," but who is sleeping in whose hut has yet to be divulged. The "professor" member of Silvers' team, Tiy-E Muhammad, is a true professor of psychology and human sexuality at the Atlanta University Center, and has been dubbed "The Love Doctor." Among his TBS-advertised hobbies are reading, writing, spending time with his two children and "having great sex."

The second season of "The Real Gilligan's Island" starts at 8 p.m. Wednesday on Sunflower Broadband Channel 10.

Though Silvers acknowledges that there is sexual tension inherent in the basis of the show, she denies that the producers ever attempted to engineer relationships.

"I think everybody hopes that Gilligan gets the girl, but nothing was pushed on us," she says.

Likely for security and secrecy, though fitting conveniently with the original show's premise, when the cast members gathered and were flown to the set location they were given no information on where they were going, nor allowed to see their surroundings.

"I don't know where we were actually filming," Silvers says. "Seriously, when you watch us walking up onto the island, that was the first time we had seen anything."

Secrecy is a huge concern for the networks hosting reality shows, the ratings of which are largely based on their ability to generate suspense. The interview with Silvers, who is now back in the Kansas City area, is monitored by a public relations representative for TBS in New York. When Silvers is asked about location, the PR spokeswoman intervenes and says simply, "The Gulf of Mexico."

For this and other reality TV shows, if any of the cast members divulge any pertinent information, whether intentionally or not, they may suffer huge lawsuits.

"It's a tens of millions of dollars contract," Silvers says. "Pretty much you just have to keep your mouth shut and not say anything."

Now that the show is finished, Silvers is back at work in Kansas City as a bartender at Orlando's 21, and leading a relatively normal life - at least until the show begins.

"I'm working two jobs and juggling this stuff (the show) and I really don't do a lot. Mostly I'm working," she says.

In preparation for the inevitable media exposure, Silvers has already registered her own Web site, which is under construction. She expects to encounter fan sites and picture galleries, a symptom of the cult following some reality TV stars gain. Even her family, she admits, will need to adjust to the notoriety.

"I think they'll be affected a little bit," she says. "Whether it's good publicity or bad publicity, it's all publicity. They're all (my family) excited to see me on TV. Everybody's got to get their little 15 minutes of fame."