'Lords of Dogtown' skates by on atmosphere

Like the skateboarding punks of the film's title, "Lords of Dogtown" is good-looking, energetic and rather aimless. 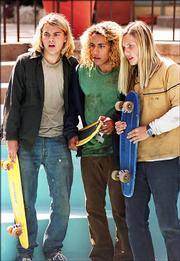 It's not so much a movie as it is a snapshot of the lives of a group of friends who overnight went from vagabond teen slackers to international innovators of a competitive sport.

While the drama is as episodic as a slide show of a family vacation, there is something ultimately compelling about the project that makes its dramatic wipeouts easier to forgive. Perhaps this has to do with the visual style of director Catherine Hardwicke, whose previous film, "Thirteen," may be one of the most unsettling non-horror movies ever made.

Much of "Lords of Dogtown" has the gritty, feels-like-you're-there quality of a documentary. This is heightened by the fact the same subject was already captured in 2001's "Dogtown and Z-Boys." That documentary was directed by skater Stacy Peralta, who also wrote the screenplay of this new feature. His involvement as both author and lead character keeps the line between fact and fiction intentionally blurry.

In 1975, Peralta was part of a clique of teenage surfing bums whose turf centered on an area of Venice, Calif., called Dogtown. The film focuses on three of the standouts: the introspective Peralta (John Robinson), the rebellious Jay Adams (Emile Hirsch) and self-absorbed Tony Alva (Victor Rasuk).

When the trio begins to realize "there's more concrete in the world than great surf breaks," they eventually organize into the official skateboarding team for the local Zephyr surf shop, which is run by the always-baked Skip Engblom (a kooky Heath Ledger).

Like the skateboarding punks of the film's title, "Lords of Dogtown" is good-looking, energetic and rather aimless. It's not so much a movie as it is a collection of episodic snapshots of a group of friends in the mid-1970s who overnight went from vagabond teen slackers to international innovators of a competitive sport.

Thanks in part to a California drought, the athletic kids discover a more vertical version of boarding by sneaking into drained swimming pools and using them as their own private arenas. The technological introduction of urethane wheels allows them to grip walls in gravity-defying displays.

In the span of just two years, the three earn worldwide acclaim for turning a tame neighborhood activity into an extreme sport. Inevitably, the egotism ("The dude's competing with the sun for the center of the universe.") that accompanies sudden fame causes the three to choose dissimilar paths with long-term consequences.

Opening with the often misleading title card that claims it was "inspired by a true story," the film certainly carries the air of authenticity. Admittedly, a haze of nostalgia permeates the effort, and there's a sense that the boys' rambunctious behavior is exaggerated for dramatic effect. Yet "Dogtown" not only looks like the 1970s but feels like it.

That authenticity works against the movie on a narrative level, however. Not a whole lot happens in "Dogtown." And the film is populated with characters who don't have much going on in the personality department - a drawback that is probably closer to reality than some Hollywood-ized version that might force-feed quirky traits onto the kids.

Nope, these are just typical California dreamers who are trying to skate fancy and score with chicks.

It would be simple to dismiss "Dogtown" as just another throwaway summer flick aimed at the youth market. (It could easily have been titled "The Fast and the Furious.") But there is a depth to Hardwicke's filmmaking even when Peralta's screenplay gives her little of genuine substance to work with.

As she revealed in the disturbing cautionary tale "Thirteen," the director understands teen attitude. She approaches the picture with the same restless zeal as those Venice Beach kids when they first leapt into the deep end of a swimming pool with skateboards underfoot.