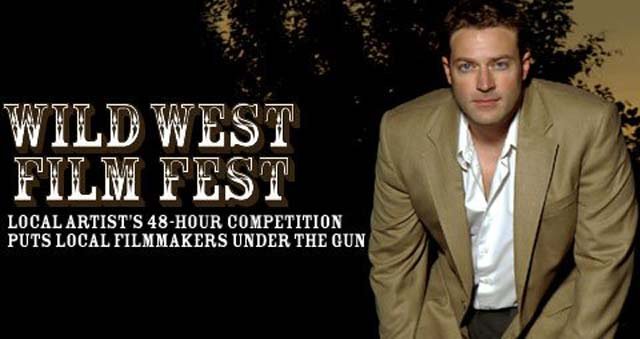 Polish your guns and strap on your chaps, it's time for a good ol' fashioned Wild West Film Fest.

OK, so maybe there's nothing really "western" about it:but Chris Dorsey thinks his film fest will get local film buffs hootin' and hollarin'. Local filmmakers had just 48-hours to scrap together a six-minute film, from brainstorming ideas to the final edit.

"The 'wild' element is that people have to throw together a working short film in two days," said Dorsey, the festival's organizer and a Kansas City motion graphics designer.

"It's not a Western, but it's just a catchy name for something that people have to sort of jump into and put together in a couple of days."

Last Friday, Dorsey announced the until-then top-secret rules: (1) The first line of the film must be "What are you doing here?" and (2) the film has to have a Kansas (or Kansas City, Mo.) landmark.

On Sunday - just 48 hours later - 24 filmmaking teams turned in their work, all of which will be shown at the festival, Friday June 10th at The Granada Theater.

The top three winners in each category will receive $800 in prizes donated by local merchants.

Dorsey borrowed the 48-hour film festival idea from his experience in the Independent Film Coalition Kansas City One-Night Stand. Although that event went smoothly, he was disappointed with the even shorter production span, the small viewing screen and the lack of a prize for the winner.

"There wasn't something that really motivated us to work other than just the fact of the competition itself," he says. "So I thought, why not put together something where people are actually working together towards receiving a nice prize?"

Hanuman Brown-Eagle has participated in the One-Night Stand for the past three years and is looking forward to the Wild West Fest.

"It's an opportunity to start and finish a project in a short time frame. It's instant gratification," Brown-Eagle said.

But the short production time can make for:well, crappy films, especially if the filmmaker doesn't know what to expect. That was the case for Lawrence filmmaker Matt Toplikar at the 48-Hour Film Project in St. Louis.

His film for the that competition turned out to be "the worst thing I've done in the last five years." Too many teammates, actors and locations complicated the short-term project. He said his strategy for the Wild West Film Fest should prevent a repeat of that experience.

"Simplification is a good thing, I'd say...I'd want no more than four (teammates), probably. People who are quick and smart and know what they're doing."

Though the film's time limit is six minutes, Dorsey feels that this will not hinder the quality of the films.

More film shorts by local filmmakers (Though many of these filmmakers are participating, the actual films they made for the competition won't be unveiled until the event)

"The main reason we did the six-minute limit was to get as many people into the competition as we could," he says. "To me, it actually sort of helps a little bit when you're working over such a short period of time and you're trying to produce something. You don't have that huge time span to create anything you want, so it sort of limits it a little bit."

Among the celebrity judges for Wild West are actress and KC-native Dee Wallace Stone, best known as the mom on "E.T." as well as roles in "Cujo" and the original "Stepford Wives." Kevin Wilmott (KU film professor and director of "CSA: Confederate States of America"), Michael McMillian (actor on the WB's "What I Like About You!"), Dr. Randy Olson (owner of Prairie Starfish Productions) and Abraham Lim (editor of "Cookie's Fortune") are also judging.

Proceeds from the $6 tickets will benefit Lawrence Habitat for Humanity.